The recession/no recession debate will continue for a while and be especially heated amongst politicians.  When the dust settles we are certain that the National Bureau of Economic Research (NBER) will not categorize the performance of the economy in the first and second quarters of this year as the beginning of a recession.  It simply does not fit the parameters it uses to make that call.  That is not to say the economy hasn’t weakened as interest rates have risen and inflation has eroded purchasing power.  After declining in the first  half of the year we expect the economy to expand at a 1.5% rate in the second half of the year.   But that will not be slow enough to bring down the rate of inflation.  The Fed will have to keep its foot on the federal funds rate and push it higher to slow the economy even further and raise the unemployment rate by enough to tame inflation and bring it back to the 2.0% mark.  Right now the stock and bond markets are priced for perfection.  They expect perhaps one more rate hike from the Fed which will slow the economy enough that inflation will quickly subside from its current pace towards 2.0%, and that combination of events will allow the Fed to lower the funds rate by the end of next year.  That strikes us as a bad bet.  First of all, why in the world are the markets so convinced the Fed is making the right call on inflation?  Over the past two years it had perhaps the worst track record of anybody on forecasting inflation.  Have we forgotten that for two years it told us that the inflation acceleration was temporary only to change its mind last December, determine that inflation was going to be much longer-lasting, and conclude that it needed to raise rates sharply because it had fallen so far behind the curve?  Our bet is that inflation will remain stubbornly high for a much longer period of time and require several more rate hikes to bring it back under control.  Those higher rates will eventually bring about the inevitable recession.  But that recession is more likely to be a 2024 event, not 2022.

The NBER defines a recession as a widespread decline in economic activity.  It looks at GDP growth in making that determination, but also it recognizes that a single indictor can frequently be distorted by any number of factors.  In addition to GDP it expects to see a decline in employment.  In the first half of this year payroll employment has risen by 456 thousand per month and is likely to increase by an additional 300 thousand in July.  It expects a decline in industrial production.  But production has risen at a 5.1% pace.   It expects to see a drop in consumer spending.  But real consumption spending rose at a 1.4% annual rate.  Despite the media’s hype, the economy is not in recession.

Having said that, all is not well.  The economy has clearly slowed and if the Fed raises interest rates high enough it will eventually push it over the edge into recession.  Right now, the Fed’s job is to corral inflation and if the economy slips into recession to make that happen, so be it.  Unfortunately, the inflation rate is not cooperating.  The CPI has risen 9.1% in the past year.  The core CPI has climbed by 5.9%.  Even the Fed’s preferred inflation measure  the core personal consumption expenditures deflator has risen 4.8%.

One month ago in June the Fed expected the core PCE deflator to increase 4.3% this year.  Its current 4.8% pace far exceeds the Fed’s expectation.  It is considerably higher than what the Fed thought just a month ago.  It cannot slow the pace of rate hikes yet. The situation seems to be getting worse.   The idea that this inflation gauge will slow to 2.7% in 2023 seems highly unlikely.  That is because the Fed’s expected 3.5% funds rate at yearend combined with a 4.8% inflation rate means the real funds rate will be -1.3%.  How can it expect the economy to slow enough to reduce inflation to 2.0% with negative real interest rates?  Even the Fed believes that in the long run it needs a positive real funds rate.  It targets inflation at 2.0% and believes that a 2.5% funds rate is required to achieve that objective.  In other words it believes it believes a 0.5% real funds rate to be consistent with 2.0% inflation.  Negative real rates will not do the trick. 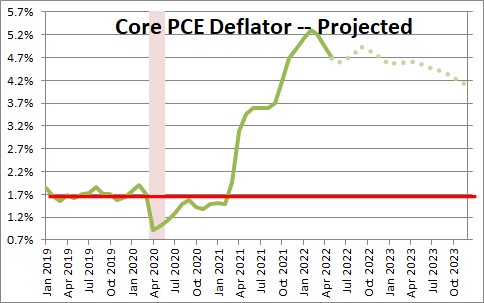 We have said for some time that we are  looking at two indicators in particular to tell us when a recession might be forthcoming.  First, the real funds rate.  If at yearend the Fed has the funds rate at 3.5%, we expect the CPI to increase 7.7%, the core CPI to increase 6.6%, and even the core PCE deflator to increase 4.8%.  Any way one slices it, the real funds rate will continue to be negative at the end of this year no matter which inflation measure one chooses. 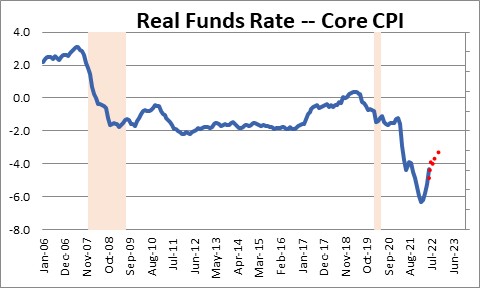 Second, we are looking for an inverted yields curve (fed funds rate versus the 10-year).   With the big increase in the funds rate at its last FOMC meeting and the big rally in bond yields, the curve flattened dramatically during July.  By yearend we expect the fed funds rate to be 3.5% and the yield on the 10-year note to also be 3.5% hence, the curve will be absolutely flat and will be getting close to the danger point of inversion.  If the fed funds/10 year curve is flat at yearend, a recession would be unlikely for a while.  The bottom line is that the economy is not yet in recession, but the odds are good that it will be in one by the end of 2023 or early 2024. 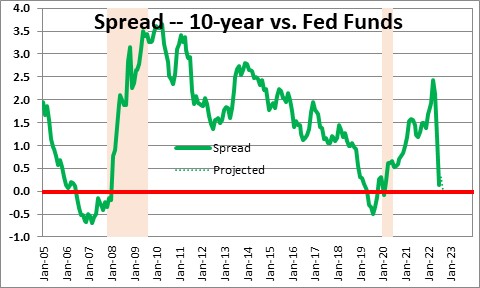