Restrictions Are Not the Answer

As the corona virus spreads more rapidly politicians both in Washington and at the state level are struggling to find the proper response.  On the one side, Congress is on the verge of passing a $900 corona virus relief bill.  While politicians differ about exactly what type of spending is necessary, they all seem to agree that some sort of an assistance bill is required.  But is one really needed?  Will it help those truly in need of assistance?  What are the longer-term consequences?  At the same time state governors, especially the governors of California and New York, are tightening already significant restrictions on movement.  But we learned from the experience in the spring that tighter restrictions hit lower income service sector workers the hardest – minorities in particular.  Aren’t tighter restrictions making the situation worse for the very people they are trying to help?  We are not convinced our leaders in Washington or elsewhere are going about this in the right way.

Clearly some Americans are struggling.  Fed Chair Powell summed it up nicely in his press conference, “The economic downturn has not fallen equally on all Americans, and those least able to shoulder the burden have been the hardest hit.  In particular, the high level of joblessness has been especially severe for lower-wage workers in the service sector, and for African Americans and Hispanics.  The economic dislocation has upended many lives and created great uncertainty about the future.”  As a result, he fully supports additional government spending to help those in greatest need.

But the Fed has been particularly negative since the recession began in March, and its forecasts have widely missed the mark.  For example, in June it expected GDP to decline 6.5% this year.  In September it revised that upwards to a 3.1% decline.  And now in December they say it will fall 2.4%.  Ditto for the unemployment rate.  In June, the Fed thought it would end the year at 9.3%.  In September it said it would be 7.6%.  Now the Fed pegs it at 6.7%.  We have the greatest respect for the Fed and its team of economists.  But those forecasts are some of the worst ever from the Fed.  It completely underestimated the ability of Americans to adapt to a crisis.  That raises the question whether the Fed continues to be far too pessimistic.

At the press conference Fed Chair Powell talked about the ongoing surge in COVID-19 cases and “the next few months are likely to be very challenging”.  But at the same time the Fed raised its forecasts of GDP growth for 2021 from 4.0% to 4.2%.  We are having a hard time squaring the Fed’s forecasts with the dismal situation portrayed by Chair Powell.  Does that mean that the first quarter could be quite weak, but that the economy comes roaring back in the subsequent three quarters?  If so, why such gloomy verbiage and why the need for so much additional government spending?

Nevertheless, a $900 billion corona virus relief package is on its way and may be passed by the time you read this.  And certainly some parts of the package will provide assistance to those in need, in particular the extension of $300 per week of Federal unemployment benefits, and $600 tax refund payments.  But we worry about the extent to which those benefits will provide much lift to the economy.  Many of the tax refund payments to wealthier individuals will be saved rather than spent.  After all, the savings rate is already extremely high at 13.6% rather than its normal level of 6.0%.  An extension of Federal unemployment benefits will provide a disincentive for many unemployed workers to return to work.  Many will make more from the combination of state and Federal unemployment benefits than they would make if they returned to work.  Having said that, some of those funds will find their way to people who need some assistance and that is a good thing. 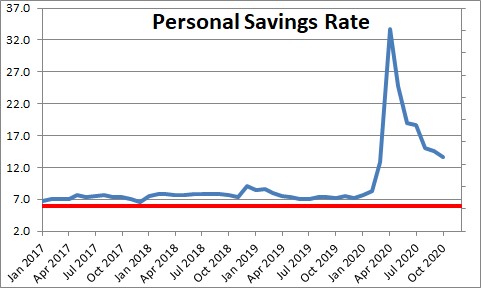 But now both President-elect Biden and Chuck Schumer have indicated that this $900 billion package should be regarded as a down payment on additional aid that they believe will be required next year.  When does this run-up in government spending end?  Or does it?  We still believe that debt matters.  The debt to GDP ratio is now at the 100% mark and is clearly headed higher.  The record high level for this ratio was 106% right after World War II and we will soon surpass that.  Are we approaching a danger point? 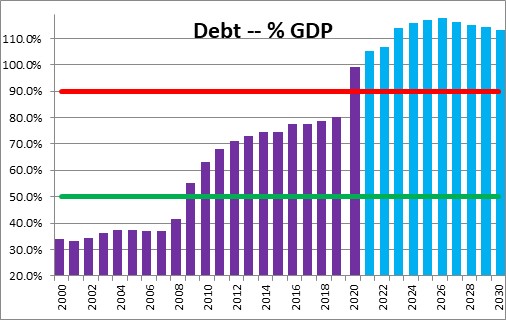 We believe that the economy will perform rather well next year.  We anticipate GDP growth of 5.5% (versus the Fed’s 4.2%) and expect the unemployment rate to fall to the 4.0% full employment level by December 2021 (versus the Fed’s 5.0%).  Maybe that is right.  Maybe not.  But if it is right, the risk is for a more substantial run-up in inflation.

Right now money supply growth has surged to 23%.  That is almost double the fastest 12-month growth rate recorded at any time since 1960.  There is little doubt in our mind that inflation will soon rise.  We are already seeing higher home prices.  The price of crude oil has jumped to $50 per barrel.  As a result, we expect the core CPI to climb from 1.7% this year to 2.7% in 2021, and 3.0% in 2022.  The additional government spending being discussed will boost it further.  The risk in our mind is that inflation turns out to be higher than expected rather than lower. 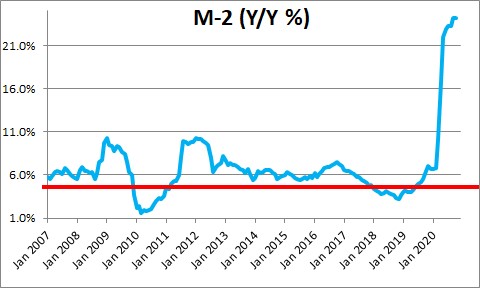 The other thing we find puzzling is the tendency for state governors to impose additional restrictions to combat the ever widening spread of the virus.  California Governor Gavin Newsome, and NY Governor Andrew Cuomo are leading the way.  But unemployment rates in those two states are 9.3% and 9.6% respectively and restrictions will push those unemployment rates back into double-digits.  We wonder whether this is the appropriate action to take.  In the spring we learned that restrictions have a devastating impact on the economy.  We saw the unemployment rate surge to 14.7%.  And we subsequently learned that the high level of joblessness was especially severe for lower-wage workers in the service sector — blacks, Hispanics, and women in particular.  Both Newsome and Cuomo are Democrats.  The Democrats say they want to give lower-income earning people the relief that they need.  But yet it seems to us that the additional restrictions are making the situation worse for the very people they are trying to help.  This is not making a lot of sense.

To bridge the gap between now and the time a vaccine arrives, wouldn’t it be better to provide as much assistance as possible to those over age 65 where 80% of the COVID-19 deaths have occurred, encourage the wearing of facemasks and social distancing, make sure hospital workers and first responders have what they need to deal with the inflow of new patients, and expedite the distribution of the vaccines?

Our sense is that politicians in Washington and elsewhere — of both parties – want to create the appearance that they are doing something to combat the spread of the virus.  But it is not clear to us that any of the action being taken, whether additional spending or tighter restrictions, will actually do much to slow it down.  A vaccine is the answer.  If, as expected, a vaccine is distributed quickly, herd immunity could be achieved by midyear.  We hate to be cynical, but at that point the politicians can claim victory.  They did it!  They stopped the virus dead in its tracks!

Hang in there.  For the first time since March a vaccine is on the way and the end of the pandemic is within sight – with or without the additional government spending and tighter restrictions currently in the works