The employment report for October confirmed that – contrary to the expectation of most economists – the economy remains on a strong upward trajectory.  After a stunning 33.1% GDP rebound in the third quarter most economists thought that the fiscal medicine would wear off and fourth quarter growth would slip to perhaps 3.0%.  Not even close.  We continue to look for fourth quarter GDP growth of 10.0%.  It seems to us that most economists are missing the fact that American consumers and business people are remarkably resilient to adversity.  Consumers continue to spend at a vigorous pace, employers are willing to hire, and there is no evidence either of those things are about to change.  With a healthy head of steam, a vaccine on the horizon, and the Fed out of the picture for the foreseeable future, the economy should expand at a steamy 5.5% pace in 2021, and the stock market will continue its strong upward trajectory and set new record high levels along the way.

To satisfy the demand for their goods and services, every month employers have a choice.  They can hire new workers, or they can choose to work their existing employees longer hours.  They are doing both.

Payroll employment for October rose by 638 thousand.  But 147 thousand Federal government workers who were hired to process the Census were laid off in October.  As a result, private sector employment rose by an impressive 906 thousand.  Those Census workers were hired earlier in the year.  When they were hired, they biased the payroll employment data upwards.  When they are subsequently laid off, they biased the payroll employment data downwards.  In the past three months when the impact of the hiring and firing of Census workers presumably washes out, payroll employment has risen on average by 934 thousand per month.  Private sector employment in that same time period of time rose by a virtually identical 942 thousand.  Any way you slice it, the American economy continues to crank out almost 1 million new jobs every month with no hint of a slowdown in sight.

In lieu of hiring a new worker, an employer could choose to work his existing employees longer hours in an effort to boost production.  In the past several months the workweek has climbed to a record length of 34.8 hours.  That is impressive for a series that dates back to 1999. 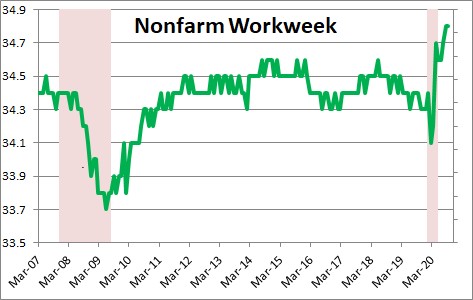 Clearly the demand for their goods and services is so robust that employers are doing everything in their power to boost production.  The economy is on a roll.

Given the robust gains in employment the unemployment rate has been falling like a rock.  After reaching a peak of 14.7% in April the unemployment rate has declined every month since then to its current level of 6.9%.  That is an average monthly decline in the past six months of 1.3%.  In October it fell 1.0%.  Thus, the unemployment rate continues to shrink at a remarkably rapid pace.  Given all of this, we project that the unemployment rate will easily decline another percentage point by yearend to 5.9%.  Furthermore, we expect it to fall to 3.7% by the end of next year.  Keep in mind that the Fed believes the full employment threshold is 4.1%.  Thus, if we are right, the economy will be back to the full employment mark by the fall of next year.  For what it is worth, the Fed in September thought the full employment level would not be reached until the end of 2023.  It appears to be two years ahead of schedule.  With all due respect to Fed economists, they have been way off the mark on this one.  But it is not just Fed economists, the entire profession has been far too pessimistic. 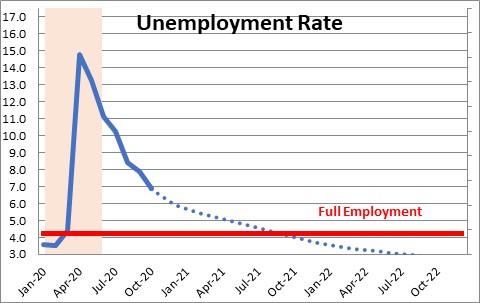 If we know how many people are working (payroll employment) and how long they worked (nonfarm workweek) we can make a reasonable guess about how many goods and services they can produce (GDP).  The Bureau of Labor Statistics incorporates those two series in its monthly aggregate hours index.  Like every other indicator it hit bottom in April and has been climbing steadily since.  This index rose 0.8% in October and the average increase the past three months has been 1.0%.  It is almost certainly going to continue to climb further in November and December.  If that happens the index will rise at about a 10.0% pace in the fourth quarter which is, in large part, why we are forecasting a 10.0% increase in GDP in the fourth quarter.  This series was an early tipoff that we were in store for a 30% GDP growth rate in the third quarter.  It is almost certainly an early indication that Q4 GDP growth will eclipse the 3.0% growth pace most economists are currently expecting.

Why is all of this happening?  Some of it is still attributable to the stimulus.  When the Federal government sent every taxpayer a $1,200 tax refund check in March and April, that boosted income but consumers had nowhere to spend it so the savings rate shot up to 33%.  It is typically about 6%.  As the economy has been re-opening the savings rate has fallen to 14.3%.  But that means that consumers still have plenty of savings available to boost spending for months to come. 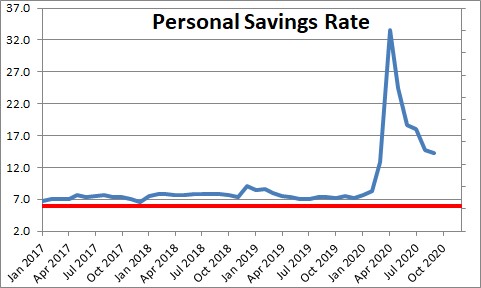 At the same time mortgage rates have declined to a record low level of 2.8%.  When the Fed buys U.S. government and mortgage-backed securities there is a tendency for long-term interest rates to decline so the Fed has helped this to occur.  The current 2.8% level of mortgage rates has attracted droves of buyers. 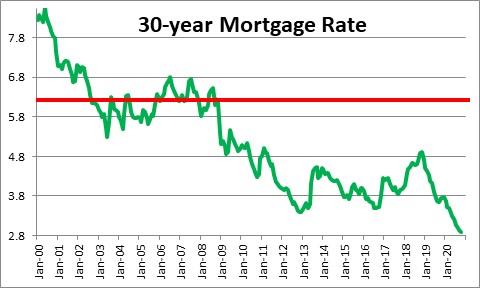 Existing home sales in September came in at a 6.5 million pace which is the fastest pace of sales since 2006.  Furthermore, home sales would have been significantly faster if there were more homes available for realtors to sell.  Realtors are having to deal with a month’s supply of homes available for sale that is about one-half of what they need.  The almost insatiable demand for housing has reduced the amount of time between listing and sale to a record short period of time of just 21 days.  Meanwhile, after working from home for six months, renters in expensive metropolitan areas like New York, Chicago, and San Francisco are fleeing the city and moving to the less expensive suburbs.  Other city dwellers are headed for resort areas like Lake Tahoe, the Jersey shore, and the mid-Atlantic beaches where sales are booming. 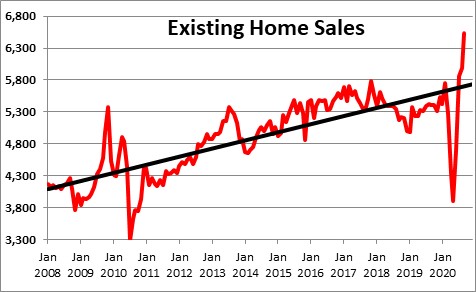 This economy has sufficient momentum to keep it going at a respectable pace for months.  Now throw into that mix the likely availability of a vaccine by the end of the year, and the economy will get yet another shot of adrenaline early next year. While it is true that the virus is spreading more rapidly, the other reality is that we — consumers and business people — do not seem to care.  We have been cooped up for so long we are desperate for life to return to some sense of normal.

The corona virus seems most like the Spanish flu which hit the U.S. between 1918 and 1920.  But do you remember what happened next?  The “Roaring Twenties”.  As Yogi Berra once said, “It’s déjà vu all over again.”  Are we perhaps talking about the return of the “Roaring Twenties” — the roaring 2020’s that is, not the 1920’s?