First quarter 2022 GDP surprisingly declined 1.4%.  But it would be a serious mistake to view the single-quarter decline in GDP as a harbinger of recession.  Recessions begin when consumers pull back and cut spending.  They have not.  Recessions begin when home sales start to fall.  They have not.  Recessions begin when orders shrink and businesses curtail investment spending and begin to lay off people.  They have not.  Consumers and businesses continued to spend in the first quarter, but once domestic sources for their purchases dried up they turned to imported products which were more readily available.  Thus, supply constraints on the ability of manufacturers to produce continues to weigh on the pace of economic activity in the U.S. and, given the rapid spread of COVID throughout China, those supply constraints may be getting worse.  But eventually those supply constraints will end.  Nevertheless, given the first quarter GDP outcome and developments in China, it now appears to us that the bulk of the supply chain improvement will be in 2023.  As a result, we have trimmed our GDP growth outlook for the year from 3.5% to 2.0%.

For the past two years the economy- has been buffeted by a series of shocks from a variety of sources.  COVID has distorted patterns of growth for two years as cases first rise and then decline.  The quarantine caused a sharp contraction in GDP growth in the second quarter of 2020.  A dramatic rescue package caused an almost equally robust surge in GDP in the third quarter.  Additional government spending fueled the pace of spending in the second half of 2020 and first half of 2021 even though the economy was well past the danger stage.  That dramatic rebound in spending created supply shortages as the pickup in demand far outstripped manufacturers ability to step up the pace of production.  That supply/demand imbalance then generated a dramatic surge in inflation.  Now, the Federal Reserve has begun what is expected to be a series of rate hikes and shrinkage of its balance sheet which it hopes will counter the pickup in inflation.  Meanwhile, Russia invaded Ukraine which has raised the specter of a war that expands well beyond the borders of the two countries.  And if that is not enough COVID is spreading rapidly through China.  It has largely shut down Shanghai and fears are spreading of a similar lockdown in Beijing.  Being buffeted by this series of factors there have been wide fluctuations in almost every economic indicator which makes getting a firm read on the pace of economic activity challenging for consumers, business leaders, investors, and policy makers.  While the first quarter GDP decline was surprising, we believe it should not be interpreted as a sign of an impending recession.  As long as spending holds up, the economy will be fine.

Consumer spending which represents about 70% of GDP continues to climb.  It increased 1.1% in March after rising 0.6% in February.  Those nominal gains surpassed the increase in inflation in each of those two months.  Spending in real terms rose 0.1% in February and 0.2% in March.  Consumer spending expanded at a solid 2.7% annual rate in the first quarter.  Apparently consumers are undaunted by rising inflation, the fear of sharp increases in interest rates in the months ahead, and uncertainly surrounding the war.  Consumer spending is showing no sign of backing off.

The  housing market continues to expand.  Residential investment spending rose 2.1% in the first quarter as sales have held up well despite a dramatic increase in mortgage rates in the past several months and the steady run-up in home prices.  The biggest problem in housing is a shortage of homes available for sale, not a drop in demand.  In March the length of time between listing and sale was a near record short period of time of 19 days.  The number of potential home buyers continues to far exceed the number of sellers. 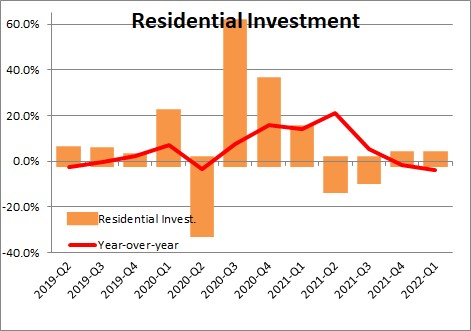 Businesses, meanwhile, have been sharply boosting investment spending.  Led by a 15% increase in equipment spending and an 8% gain in intellectual property, nonresidential investment spending climbed 9.2% in the first quarter.  It appears that with raw materials hard to attain because of supply chain disruptions and labor in short supply, businesses are increasingly turning to investment in an effort to boost productivity and increase output.  To stay in the game they need to spend money on technology. 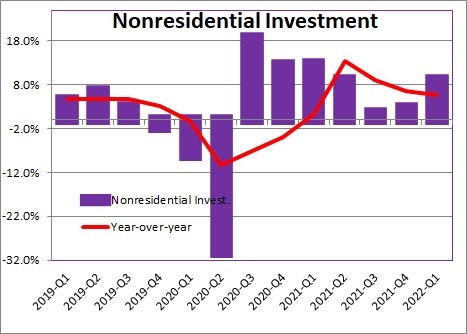 If all these spending categories were so strong, how did GDP decline 1.4%?  Easy.  The trade deficit widened dramatically.  Specifically, the deficit for real net exports increased by $191 billion in the first quarter as exports fell 5.9% and imports jumped by 17.7%.  That subtracted an eye-popping 3.2% from first quarter GDP growth.  In  other words, if businesses and consumers had purchased all those goods from domestic firms, GDP would have risen 1.8% in the first quarter rather than contracting by 1.4%.  But when the goods that consumers and business people wanted to buy were not available, they turned to imported products to satisfy demand.  That reduced GDP growth in the U.S., but boosted growth elsewhere. 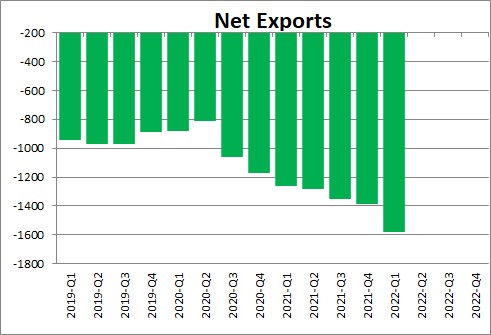 Are we supposed to worry about that 1.4% GDP drop in the first quarter?  We do not think so.

If businesses were at all worried about the pace of economic activity in the months ahead, they might begin to lay off a few workers.  But that is not happening.  In the week of April 23, initial unemployment claims declined slightly to 180 thousand which is close to the record low level for this series of 162 thousand set back in November 1968.  Employers are not thinking about laying off bodies.  Instead, they are pulling out all the stops to hire as many people as they can.

Meanwhile, factory orders keep climbing faster than manufacturing firms can boost production, which means that the backlog of orders has been rising and continues to climb.  Manufacturing firms need to step on the gas not the brake. 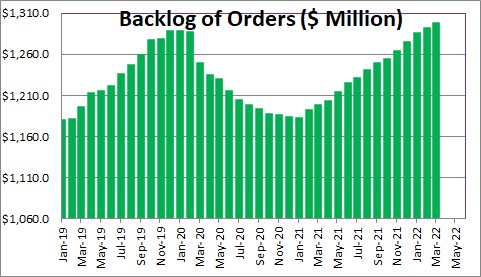 While GDP surprisingly contracted in the first quarter, none of the recent data on consumer and business spending suggest that this is a harbinger of weaker growth ahead.  Having said that, with supply constraints still acting as a brake on economic activity – perhaps even an increasing constraint —  we have cut our GDP forecast for the year from 3.5% to 2.0%.  Like consumers, business leaders, investors, and policy makers everywhere we are struggling to interpret the cross currents from inflation, the Fed, supply constraints, and the war.  Our sense is that we may have reduced our GDP forecast for the year by too much, but the reality is that GDP did contract by 1.4% in the first quarter.  That was not expected.

In the end, we continue to focus on real interest rates.  Even if the Fed raises the funds rate to 2.5% by the end of the year, the inflation rate will be far higher.  There are  many different measures of inflation.  Pick any one you want.  They are all likely to increase by 6.0% or more this year which means that real interest rates at yearend will be negative by at least 3.9%  (2.5% funds rate less 6.4% core CPI inflation).  Negative real interest rates will not slow the pace of economic activity. 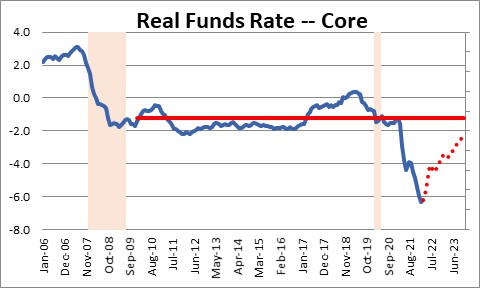 The economy may have gotten whacked in the first quarter, but it is not down for the count.