Given what we know about employment and hours worked, it now seems likely that second quarter GDP will contract at a 60.0% annual rate.  The $2.5 trillion in the two already-approved fiscal stimulus packages are designed to get the economy back on track.  That seems to be working.  The Fed’s purchases of government securities have swamped the banking system with surplus reserves.  That provides the ammo for banks to boost lending.  For their part, banks have been aggressively making funds available to the business community.  At the same time money supply growth has surged which means that funds are available for both businesses and consumers to pay their mortgage or rent and keep the lights on.  Given this dramatic pickup in financial activity, we believe the economy will come roaring back in the third quarter with an expected GDP growth rate of 50.0%.  But was all of this worth it?

If we know how many people are working and how many hours they were on the job, we can make a reasonable estimate of how many goods and services they produced – i.e. GDP.  These two measures are captured in the monthly aggregate hours index.  Given the massive number of jobs lost in March and April and the drop in the workweek in those two months, the aggregate hours index for April stands at 93.9 which compares to a first quarter average of 111.3.  If the index were to be unchanged in May and June, the second quarter average would be 15.6% below where it stood in the first quarter, which works out to an annualized rate of decline of 62.5%.  But given that job losses seem to be continuing in the early part of May the index is likely to fall further in that month, and the GDP decline for the quarter could be even larger.

The government is hoping to get the economy back on track via fiscal stimulus.  If our forecast for a 60% drop in second quarter GDP is correct, that translates into a decline of $2.8 trillion.  Thus far Congress has passed two fiscal stimulus bills that total $2.5 trillion.  As those funds quickly work their way into the economy, it seems clear that we are in store for a dramatic rebound of perhaps 50% in the third quarter.

The Fed has been acting aggressively to make sure that happens.  For example, it has boosted its balance sheet by $2.5 trillion since mid-March primarily via its purchases of U.S. government securities with an equal amount more to come in the weeks ahead. 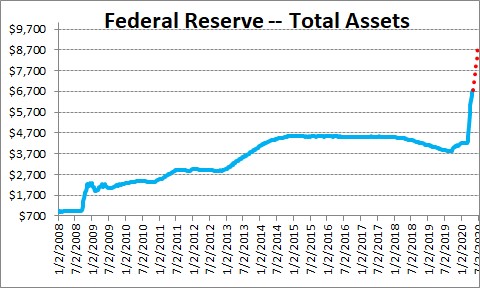 When the Fed buys Treasury securities it puts the proceeds in a bank’s “reserves” account which is effectively a checking account for banks.  Excess reserves have climbed to $3.0 trillion which represents the ability of the banking system to make loans to businesses and consumers.  Banks clearly have plenty of ammo. 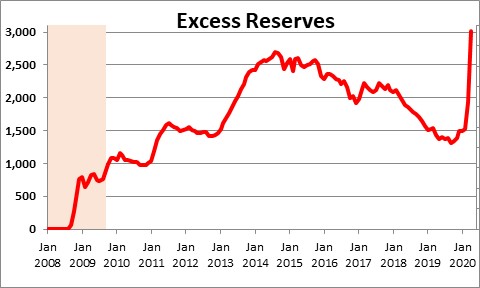 And banks have been busy.  Bank loans have climbed by $800 billion in the past two months, almost extensively to businesses. 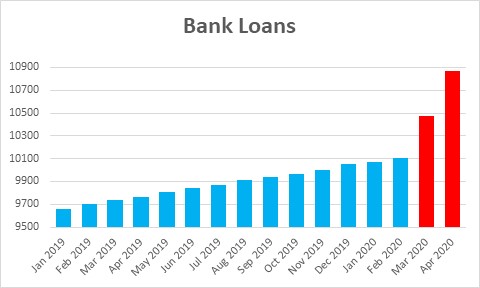 When banks make loans, they put the proceeds in the borrower’s checking account.  This causes the money supply to grow.   It has taken off. 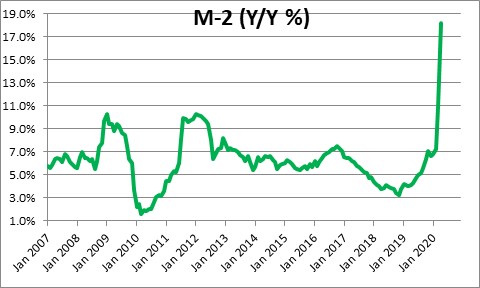 Given everything that we know thus far, we are comfortable in anticipating a 50% GDP growth rate in the third quarter.

However, these projected GDP growth rates are not cast in stone.  We will not see second quarter GDP until the end of July.  In the meantime, we will get employment data for May and June and lots of other economic indicators which will allow us to refine that forecast.  Our first look at third quarter GDP will not be available until the end of October.  While we cannot accurately forecast either of those numbers at this time, it is clear that we will see a record-breaking GDP drop in the second quarter, and an equally eye-popping increase in the third quarter.

At the moment most of the job losses we have seen are likely to be temporary.  If that is the case, the economy can quickly rebound.  But if the fiscal stimulus checks are not distributed in a timely manner, and/or the government does not allow the economy to re-open quickly, those temporary job losses will become permanent and the economic damage will be both substantial and long-lasting.  That is not our expectation, but it is our fear.

Was all of this really worth it?   It is too late to debate that now because the measures to shut down the economy have already occurred.  But this is a topic that needs to be addressed once the current pandemic is brought under control.  We had two equally devastating pandemics in 1957 and 1968 and got through them without having to effectively quarantine everyone and bring economic activity to a screeching halt.  Did we really need to do that this time?