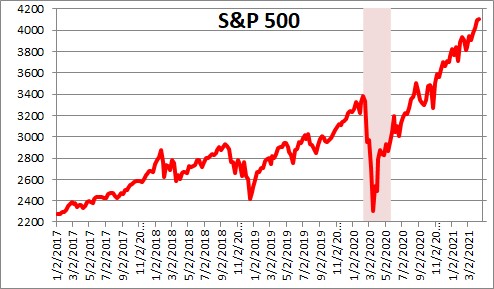 The corona virus wreaked havoc on stock prices in February and March.  After hitting a high of 3,380 in mid-February the market plunged by,1000 points or 32% in five weeks to a low of 2,304 in mid-March.

But then the government passed a $3.0 trillion of fiscal stimulus.  The Fed added another $3.0 trillion of liquidity via their purchases of U.S. Treasury securities.  As a result the stock market turned upwards and regained everything that it lost in just five months.  In the 2008-09 recession it took 5 years to regain what it lost.  It has been a dramatic run-up in stock prices.  After regaining all that it lost, every few days the stock market achieves yet another record high level.

As we see it, the economic outlook is about as good for stock prices as one could imagine.  we expect robust 7.5% GDP growth this year which means that revenues should grow quickly.  The inflation rate may rise 2.4% in 2020 which means that firms will have some pricing power.  And the Fed has pledged to keep the funds rate at 0.0% for the foreseeable future.  That is a dynamite environment for the stock market.