The Preponderance of Evidence

The Fed will raise rates at its meeting later this month.  Most likely is an increase of 0.75%.  But whatever happens, interest rates will climb significantly higher in the months ahead.  The Fed has told us that.  Pay attention!

It is tempting to look at the 0.2% increase in the unemployment rate in August to 3.7% as a sign of emerging weakness in the labor market.  That would be a serious mistake.  It came about because the labor force surged by 786 thousand in that month.  The economy created 442 thousand jobs.  The remaining 344 thousand have not yet found jobs.  One can try to explain why so many people suddenly started to look for jobs in August.  The unfortunate reality is that this series in extremely volatile.  In June and July the labor force allegedly declined by 353 thousand and 63 thousand, respectively.  That left economists scratching their heads looking for reasons why people suddenly stopped looking for jobs at a time when the unemployment rate was at a 50-year low rate of 3.5%.  The fact that 786 thousand of them started to seek employment in August is as puzzling as the earlier declines. If we lump it all together the unemployment rate for August at 3.7% is a shade higher than the 3.6% rate that existed three months earlier.  That seems to make a certain degree of sense.

Last week we wrote about how there is no truth in economics.  Every economic indicator is derived from a relatively small sample.  The results of the sample are  then blown up to represent the universe.  Once that is done the data are “seasonally adjusted” which is supposed to take into account changes that typically occur in that month.   For example, the employment data surge in the months leading up to Christmas and then decline sharply in the first couple of months of the following year.  Similarly, when school lets out in May teaching jobs decline but teachers return to work a couple of months later.  To publish dramatic changes in in those months makes no sense so the Census Bureau adjusts the data for what typically happens in those months.  But at every step of the way – from the sample to the universe and then to seasonal adjustment — there is error.  Do not ever rely on any single indicator as evidence of truth.  To determine what is happening in the labor market look at payroll employment, civilian employment, the unemployment rate, initial unemployment claims, the ADP employment report, the employment indexes in the ISM reports for the manufacturing and business sectors.  They all tell us a part of the story.  That is what the Fed does.  It looks at everything.  An FOMC meeting can perhaps be likened to a jury that must use the “preponderance of evidence” to reach a verdict.

Looking at the evidence, we conclude that the economy has slowed from what it was at the beginning of they year.  But it is in no danger of falling into a recession.  A significant number of new jobs are being created every month.  The 3.7% unemployment rate is still well below the Fed’s estimate of full employment which is about 4.0%.  Consumers are still spending.  Manufacturers are still boosting production.  We expect GDP growth of 1.5-2.0% in the second half of this year which is roughly in line with the economy’s estimated potential growth rate of 1.8%.  The economy has slowed but not enough to bring inflation down to the 2.0% mark.  Arguably, the Fed needs a recession to make that happen.

On the inflation front every measure from the CPI, the PPI, and the PCE deflator are all at least double the Fed’s 2.0% target.  But there are hints that the inflation rate is slowing. 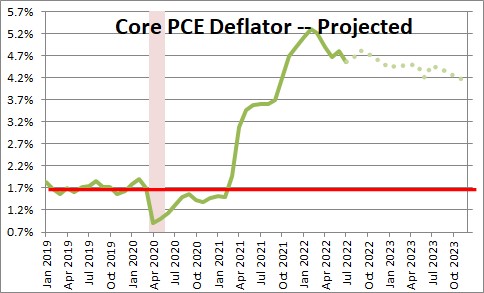 Commodity prices have fallen in the past couple of months. That will help.   But keep in mind that labor costs represent about two-thirds of any firm’s overall cost and they are not included here.  Wages seem to be rising rapidly. 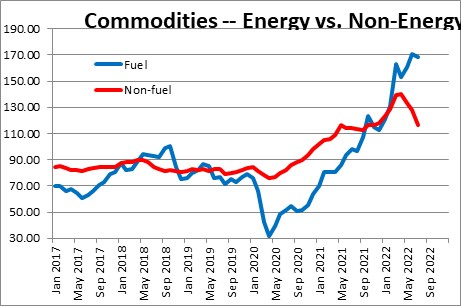 Some  economists have noted that average hourly earnings rose 0.3% in August.  That is slower than in other recent months.  However, average hourly earnings have risen 5.2% in the past year.  But the Atlanta Fed’s “wage tracker” has risen 6.7%.  That is far more troublesome.  So which to believe?  If  you are the Fed you want to see a slowdown in wages, but a single month of data for average hourly earnings is not going to convince it that anything has changed.  The ‘preponderance of evidence” suggests that wages are rising far more rapidly than is consistent with a 2.0%  inflation rate. 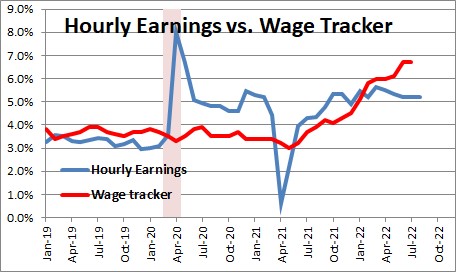