Much has been written about the growing student loan problem in the past couple of months.  But, as always seems to be the case, the hype about the dimensions of the problem seems to exceed the reality.  It is true that student loans outstanding are now $1.5 trillion.  But their rate of growth has slowed in recent years to a pace in line with other types of consumer debt.  Furthermore, the percent of student loans 90 or more days delinquent has been steady for the past five years. 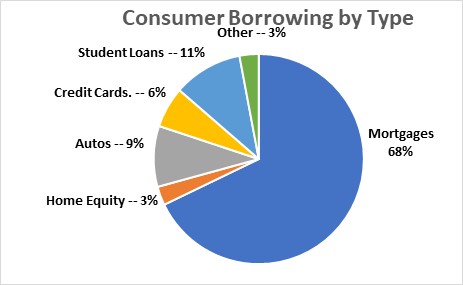 Most of the extraordinarily rapid growth in student borrowing occurred during and immediately after the recession.  Jobs were scarce and the unemployment rate reached the double-digit mark.  Against that background, workers who couldn’t find jobs opted for a college education and student lending climbed at a double-digit pace at a time when all other types of consumer borrowing were declining.  Thus, student debt as a percent of the total climbed from 4.5% of all consumer debt outstanding at the beginning of the recession to its current 11.0% share.  But growth in student loans has been steadily slowing and its rate of increase in the past year of 5.3% is virtually identical to the growth rates for mortgages, auto loans, and credit card debt. 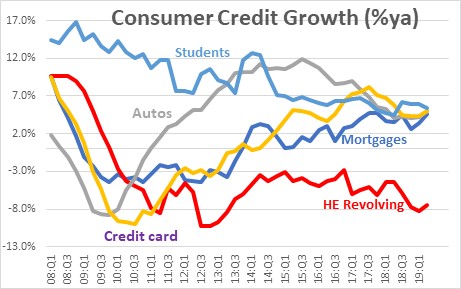 It is true that a larger percentage of student loans are 90 or more days delinquent than other types of debt.  For example 11% of student loans are seriously delinquent compared to about 8% for credit card debt and 5% for autos.  The good news is that the default rate on student debt does not seem to be increasing.  It has been steady at the 11% mark for the past five years.  The reason for the higher delinquency rate on student debt is most likely because the penalty is less severe.  If a homeowner is late on his or her mortgage payment the bank might foreclose and take back the house.  The car can be repossessed.  Past-due credit card bills incur significant late fees and hefty interest payments.  But nothing bad happens to borrowers who default on their student loans.  They are often encouraged to enroll in an income-based repayment plan under which they make payments that are no more than 10% of their disposable income, and the debt is forgiven after 20 years (or 10 years for those who enter “public service”).  When times get tough the student loan is usually the last loan to be paid. 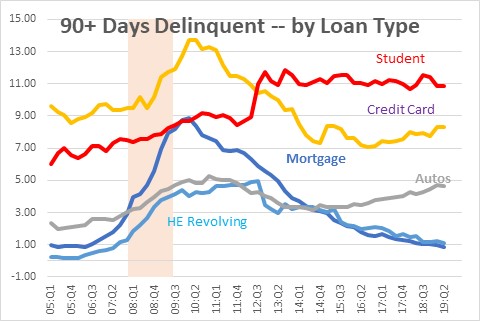 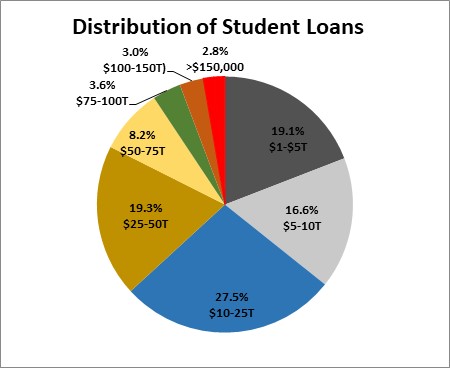 Keep in mind that nobody forced any of these students to take on debt.  If they graduated from high school but were unprepared for college work and drop out of school after a year or two with some student debt outstanding, why should their debt be forgiven?  If someone buys too big a house or car and cannot afford the monthly payments, they eventually lose the house or the car.  Why should a student loan be treated differently?

If a student chooses to major in a relatively low-paying field such as the liberal arts, agriculture and natural resources, leisure and hospitality, and education he or she may find it challenging to repay their student debt.  But, once again, they made that choice.  Shouldn’t the individual, their parents, or their school guidance counselor have advised them that it is not a good idea to take on a considerable amount of debt with little chance of landing a job that pays a high enough salary to repay that debt?

Whatever happened to the notion of personal responsibility?

We are rather hard-nosed about the notion that, in the end, the student is responsible for much of the problem.  For that reason we are strongly opposed to Sen. Elizabeth Warren’s plan to forgive $640 billion of student debt which strikes us as grossly unfair to the vast majority of student loan borrowers who make their payments on time and often struggle to do so.