The economy’s production sector continues to be constrained by shortages of labor, an inability to get necessary raw materials, longer lead times, and shipping delays.   This has reduced our projected GDP growth forecast in the near-term, but boosted our projected growth for 2022.  These production constraints are also boosting the prices of raw materials on an increasingly broad array of products.  While the Fed continues to hawk the notion that the recent inflation jump is temporary, that view is increasingly out of touch with reality.  While the Fed has accelerated the timetable for reducing its monthly purchases of securities, and moved forward the first rate hike to the end of 2022, Fed action is still far short of what is required.  Its policy stance will not even be close to “neutral” by the end of next year.  By not acting more quickly it runs the risk that inflation psychology will become increasingly entrenched. 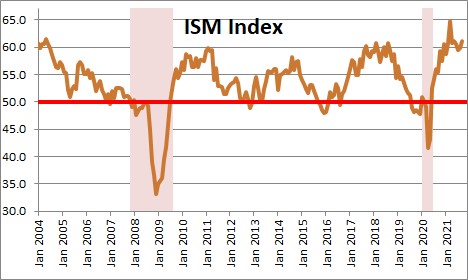 The suppliers deliver component which encompasses all of the difficulties cited above, jumped nearly 4.0 points in September to 73.4 which means that deliveries are the slowest they have been in decades.  Furthermore, these delivery difficulties are showing no sign of abating. 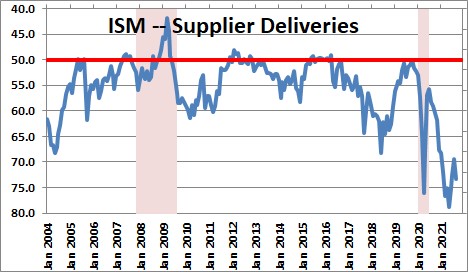 As a result, manufacturers are having to pay dearly to get the parts they need.  Furthermore, they are being forced to raise wages to have any hope of getting the workers they require.  This has lifted the prices paid component to 81.2.  Remember, the breakeven point for prices – where they are neither rising nor falling – is 50.0.  Worse yet, these firms are increasingly passing these higher costs along to their customers. 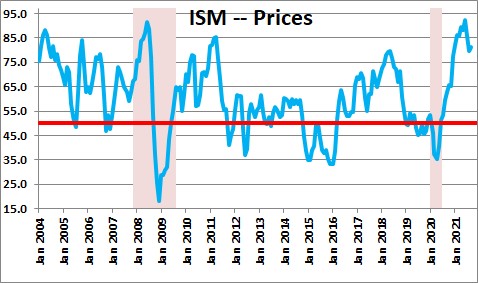 We had hoped that some of these supply constraints would begin to abate by the end of this year.  There is no indication that process has begun.  In fact, many of the manufacturing firms responding to the survey suggest that these production difficulties will linger until the end of next year.

As a result, we have trimmed our third quarter GDP forecast from 8.0% to 7.0%, and fourth quarter GDP growth from 10.5% to 8.0%.  That is still a solid pace of economic activity, but obviously not as robust as what we had anticipated.  If the Fed continues to pursue a very stimulative monetary policy stance and has no intention of raising the funds rate until the end next year, the demand side of the economy will continue to grow rapidly.  Eventually the production delays will be resolved and that will translate into faster growth.  At the same time COVID will be tamed which will both increase demand for those sectors of the economy that have been clobbered by the pandemic – such as airlines, hotels, restaurants and sporting events – and boost the supply of labor from those workers who have thus far chosen not to return to work for fear of catching COVID.  For that reason, we have boosted GDP growth for 2022 from 5.1% to 5.5%.  Growth overall has not been significantly altered, but the pattern of growth has been shifted from late 2021 to 2022.

With demand for goods and services far exceeding their ability to produce, firms are increasingly willing and able to pass the higher cost of materials along to their customers.  They have perfect cover for doing so by blaming COVID for the price hikes.

The pickup in inflation is, in our view, the result, of extremely rapid growth in the money supply.  It has grown at a 13.2% pace in the past year which is double its long-term average growth rate.  Unless the Fed jumps into action quickly to slow the rate of growth in the money supply, inflation could be significantly higher than is generally expected at the moment. 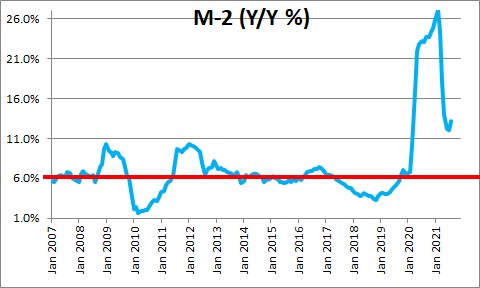 In our view, the odds of the Fed’s personal consumption expenditures deflator returning to a 2.0% pace in 2022 are virtually zero.  Instead, we think the core PCE deflator will rise 4.5% this year and 3.9% in 2022.  The Fed looks for the core PCE to rise 3.7% this year and then slow to 2.3% in 2022.  If the Fed had any hope that the recent inflation jump was going to be temporary and drop back close to target in 2023, it should be seeing some hint of that process beginning in the final couple of months of this year.  That is not happening.  The cost of materials is showing no sign of slowing down.  Firms are increasingly able to pass those higher costs on to their customers.  Oil prices have jumped to $75 per barrel and the EIA expects oil demand to continue to exceed supply through the end of this year.  Meanwhile, crude inventories are the lowest they have been in almost a decade.  This suggests that, if anything, oil prices will climb further in the next few months.    Almost every firm in the country is experiencing labor shortages and boosting wages to get the workers they need – and passing those higher costs along to their customers. 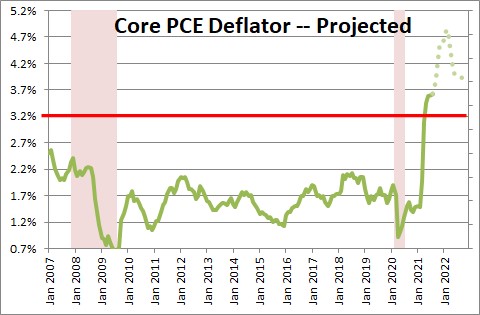 Both the economic outlook and the outlook for stock prices remain solid for the foreseeable future because the Fed has no intention of shifting its policy stance back to neutral any time soon.  The Fed thinks the funds rate is “neutral” at the 2.5% mark.  It currently expects the funds rate to reach 1.8% by the end of 2023.  If that is the case, the economy will continue to roll and inflation will rise far more rapidly than the Fed expects for the next couple of years.