The Fed believes that the recent acceleration in inflation reflects temporary factors such as hiring bonuses, disruptions in the supply chain, and a rebound from prices that were depressed during the recession.  That story is beginning to wear thin.  Its forecasts of inflation have consistently undershot reality for the past year and they are not getting any better.  It currently anticipates that its targeted inflation measure, the core personal consumption expenditures deflator, will rise 3.0% this year.  Good luck with that!  Inflation in the first five months of this year has been steadily accelerating and is showing no sign of slowing down.  We expect the core PCE to rise 4.2% this year.  The driver of this unanticipated pickup in inflation is money supply growth.  Its growth rate has soared since the recession began in March of last year and, as Milton Friedman taught us back in the 1970’s, “Inflation is always and everywhere a monetary phenomenon.”  When countries rapidly expand growth in their money supply, they experience high inflation for a sustained period of time.  But yet our Fed Chairman dismisses that notion and tells us that we need to “unlearn” that relationship.  We do not buy it.

The Fed’s inflation forecasts have been way off the mark since the recession started in March of last year.  In June of last year it expected the core PCE deflator to rise 1.5% in 2021.  They have raised it every quarter since.  In September it became 1.7%.  In December it was 1.8%.  By March it climbed to 2.2%, and in June to 3.0%..  But even 3.0% is still too low.  We know what happened to this inflation measure every month through May.  They only way its 3.0% forecast for the year can be correct is if the core PCE rises 0.15% per month for the final seven months of the year.  But in the first five months of the year the monthly increases averaged 0.43% or three times as fast as the Fed envisions for later this year.

The price component of the monthly purchasing managers’ report has climbed to 92.1.  An index of 50.0 indicates that prices were unchanged in that month.  It has risen steadily since April of last year to its current level of 92.1 which is its highest level since 1979.   Timothy Fiore, Chair of the Institute for Supply Management’s Business Survey Committee said: “Virtually all basic and intermediate manufacturing materials are experiencing price increases as a result of product scarcity and the dynamics of supply and demand, with an increasing number of panelists reporting higher prices compared to May.”  No sign of any softening of prices for manufacturers through the middle of 2021. Ditto for service sector firms. 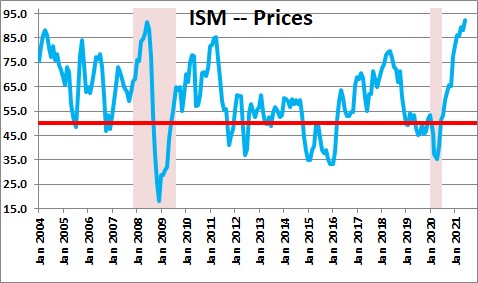 We can see this phenomenon in virtually all commodity prices.  Crude prices have climbed to $75 per barrel.  Gas prices have risen to $3.12 per gallon.  These are the highest prices in several years. 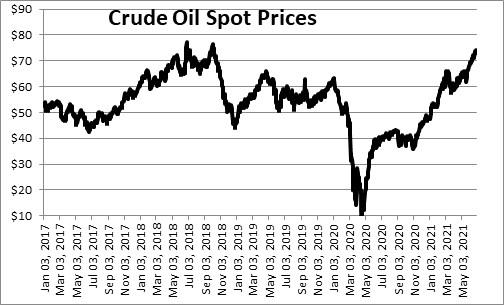 Non-energy prices have continued to surge through June and are their highest level in a decade. 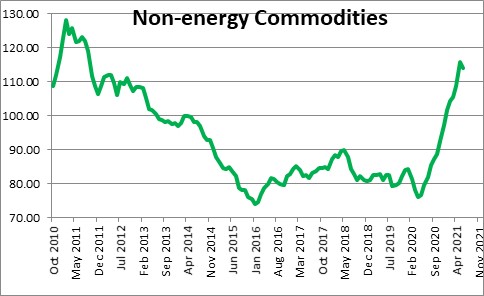 At the same time the extreme labor shortage is forcing firms of all types – but particularly those firms in low-paying industries such as leisure/hospitality and retail to offer one-time sign-on bonuses and, in many cases, boost the hourly wage to or above $15 per hour.  In the past year firms such as Target, Starbucks, Wayfair, Costco, Walmart, and McDonalds, have all boosted wages.  Their CEO’s see the handwriting on the wall.  Prior wage rates were too low.  As these large firms raise their wages, smaller ones will follow.  This is not a one-off event that will run its course in a matter of months.  At a time when qualified willing workers are hard to come by, workers are exercising their newfound power and demanding both higher wages and improved working conditions.  The pandemic and recession are triggering profound changes in the labor market which are still in their infancy.

Those firms who do raise wages say they are able to find the workers they need to keep pace with surging demand.  With corporate earnings and stock prices at record high levels, firms generally are well-positioned to withstand higher wages.

All of this suggests that the inflation increases we are seeing are not going to be temporary.  Yes, shortages of materials are contributing to the current run-up.  Yes, a catch-up from prices that were depressed during the recession (like airfares and hotel room rates), is also factor.  But we are convinced that a major cause of higher inflation is rapid growth in the money supply. After a surge in money growth in March, April, and May of last year, the Fed’s monthly purchases of U.S. Treasury securities are causing money growth to climb steadily at a 15% pace.  But the trend rate of growth of the money supply historically has been about 6.0%.  Faster money growth is going to result in faster inflation for some time to come.  Eliminating further purchases of U.S. Treasury and mortgage-backed securities would help, but the Fed is not yet prepared to do so. 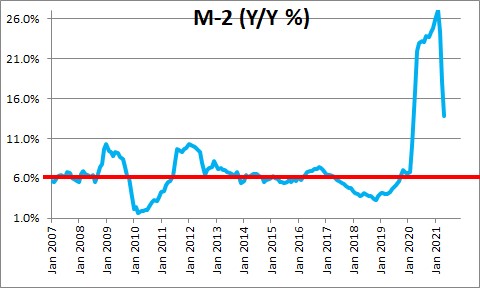 We believe that inflation will track much faster than the Fed would like at least through the end of this year.  We anticipate a 4.2% increase in the core PCE deflator this year and a 5.0% gain is not out of the question.  After missing its inflation forecast for a year and one-half, when will the Fed give up on its belief that the jump is temporary?  The higher it climbs, the greater the pressure on the Fed to cut its purchases of Treasury securities, raise reserve requirements or, ultimately, raise the funds rate.

Meanwhile the current 10-year note yield of 1.3% combined with a 2.3% expected inflation rate over the next 10 years provides a negative 1.0% real rate of return.  The Fed takes comfort from the fact that inflation expectations remain in check. But if we are right, a faster current rate of inflation will eventually boost the expected inflation rate.  If that happens both nominal and real bond yields are headed higher.