The budget deficit for fiscal 2019 is now in the book.  It jumped from $779 billion in 2018 to $984 billion.  The only good news is that it managed to stay below the $1.0 trillion level. Unfortunately, that is the last time that will happen.  Between now and 2029 the annual deficits are projected to range anywhere from $1.0 to $1.5 trillion.  Two things are important.  First, whenever the government spends more than it collects from tax revenues, the Treasury is forced to borrow an equal amount to pay its bills.  As a result, total Treasury debt outstanding and debt as a percent of GDP continue to climb.  This process is not sustainable.  Second, nobody cares.  The current problem is on the spending side and it can be fixed.  Unfortunately, neither political party has the will or the courage to do anything about it. 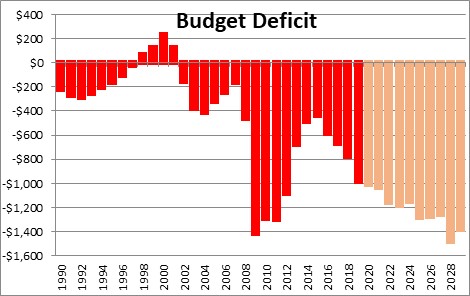 While $1.0 trillion deficits are eye-popping, expressed in dollars they do not really mean much.  They need to be gauged relative to the size of the economy.  In fiscal 2019 the budget deficit was 4.7% of GDP. Unfortunately, that is still big.  Economists generally believe that a budget deficit that is 3.0% of GDP or less is sustainable.  So what is going on?  Are government tax receipts too low?  Government spending too high?  Some combination of the two? 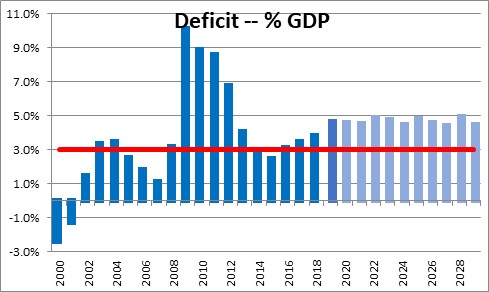 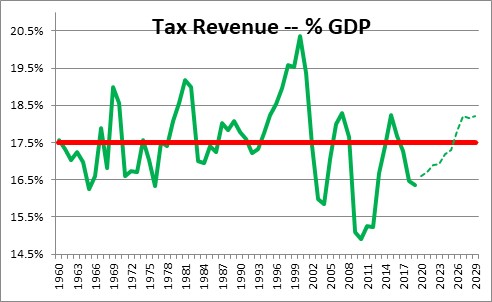 Government spending is a different story.  It jumped 8.0% this year which is the fastest growth rate in a decade as defense spending surged. 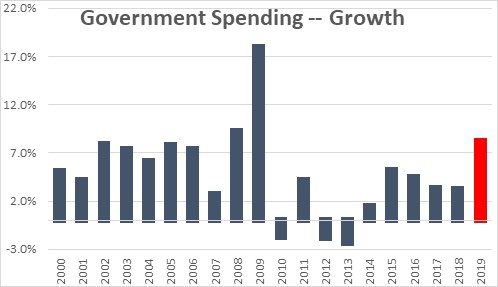 As a result, government spending climbed to 21.0% of GDP this past year which is somewhat above its long-term average of 20.5%.  As baby boomers continue to age more of them will begin to receive Social Security benefits and become eligible for Medicare.  By 2029 government spending will climb to 23% of GDP.  This is pure demographics.  It is built in the cake.  If we want this steady diet of projected 5.0% budget deficits to shrink to a more manageable level of 3.0% of GDP, we suggest that our leaders in Washington whack government spending by about 2.0% of GDP. 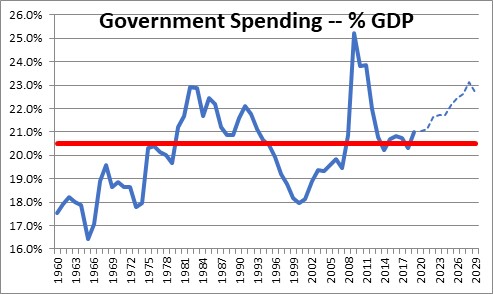 Such a cut in spending is within reach if only we could find the political will to do so.  In 2010 the bipartisan Erskine-Bowles commission – 9 Republicans and 9 Democrats – appointed by President Obama outlined what such a path might look like.  Let expenses grow at one-half the rate of inflation.   Equal cuts for defense and non-defense spending.  Reduce Social Security benefits for high income individuals.  Gradually increase the retirement age from 66 to 68.  Increase the payroll tax maximum from $132 thousand to $190 thousand.  For Medicare, do not cover the first $500 of health care expenditures.  From $500-$5,000 cover only 50%.  Raise the eligibility age from 65 to 68.  Interestingly, 11 of the 18 members of the committee agreed to the package.  But Obama thought it cut entitlement spending too much and rejected It.  Imagine!  It was his commission.  They did exactly what he asked them to do.  Fix everything.  As amazing as it may seem, less than a decade ago a bipartisan committee reached an agreement on something important.  But Obama said no.  What a missed opportunity!

The problem with a budget deficit is that every time one occurs the Treasury must issue an equal amount of debt so the government can pay its bills.  Thus, a $1.0 trillion budget deficit means the Treasury must issue $1.0 trillion of debt to finance it.  If there is another $1.0 trillion deficit in year two, the Treasury must issue an additional $1.0 trillion of debt.  It is cumulative.  As a result, both debt outstanding and debt as a percent of GDP continue to climb if the deficits persist.  Debt as a percent of GDP has been steadily rising for a decade and last year reached 79% of GDP.  Economists generally believe that a debt/GDP ratio of 50% or less is sustainable.  They also believe that once that percentage climbs to 90% the debt burden can become problematic.  At 79% the current amount of debt is a bit on the high side but perhaps not yet at a danger point.  By 2029 the percentage climbs to 95%.  Is that a problem?  Maybe.  In the years beyond as our population continues to age the ratio climbs to 144% of GDP by 2049.  Is that a problem?  Probably. 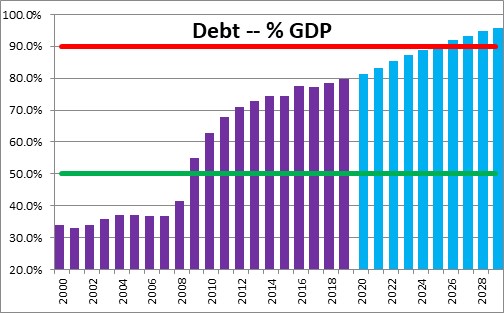 To put these numbers in context, it is worth noting that Greece currently has a debt/GDP ratio of 183%.  Other European countries that have had financing problems in recent years are Italy at 131% and Spain at 97%.  To allow the debt/GDP ratio in the U.S. to climb to 95% of GDP by 2029 or 144% later seems irresponsible.  And unlike debt laden European countries which have the European Union willing to back their debt, nobody will be able to bail out the U.S. if there is a problem.

Our budget deficits will be in excess of $1.0 trillion every year for at least a decade and probably much longer.  Government debt outstanding will climb steadily and reach a danger level within a decade.  The problem can be solved.  Unfortunately, our leaders in Washington have not yet expressed any desire to take on the issue. That probably will not happen until the crisis arrives.  How sad!