The Case for Lower Rates is Vanishing

The markets continue to look for a 0.5% cut in the federal funds rate by yearend.  No doubt some members of the Fed’s Open Market Committee continue to lean in that direction. While there remains an expectation that the economy is going to soften noticeably between now and yearend, there is virtually no evidence that a slowdown is underway.  Having said that, a number of Fed officials suggest that the Fed could lower rates in a determined effort to nudge inflation to or above its 2.0% target rate.  Our sense is that the economy is continuing to chug along at about a 2.5% pace, and that by yearend the inflation rate will rise on its own close to the 2.0% pace the Fed would like to see.  Thus, we anticipate no need for a rate reduction any time soon.

Two weeks ago we outlined half a dozen events/economic indicators that would influence Fed policy makers at their July 30-31 gathering.  Thus far, four of those six pieces of information have become available and the odds of a rate cut at the July meeting seem remote.

One of the primary reasons for expecting slower GDP growth in the second half of the year would be an escalation of the trade conflict with China.  But at the conclusion of the recent G-20 meeting Trump and Chinese President Xi Jinping agreed to restart trade talks between the two countries.  This clearly represents a truce in the trade war.  While serious obstacles remain, we remain convinced that an agreement of some sort will be reached in the second half of this year.  It is in the interest of both countries to make that happen.  If it does, the need for lower rates to support GDP growth that some argue is teetering on the brink of recession would largely disappear.

At the end of last month we received May data on the Fed’s preferred inflation gauge, the personal consumption expenditures deflator excluding the volatile food and energy components.  It rose 0.2% in May after a similar-sized increase in April.  While the year-over-year increase remains below target at 1.6%, this inflation measure has risen at a 2.0% pace in the past three months.  We expect monthly increases in the second half of the year to continue at a 0.2% pace which would lift the increase for 2019 as a whole to 1.9% and imply a 2.4% increase in 2020.   If so, there is no reason for the Fed to cut rates to bring inflation back to its 2.0% target.  It will get there on its own without any assistance from the Fed. 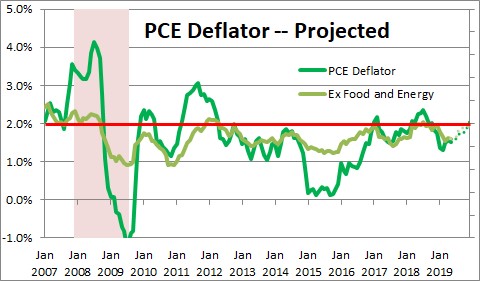 The Institute for Supply Management’s index of conditions in the manufacturing sector continued to slide in June.   It edged lower by 0.4 point to 51.7.  After reaching a peak of 60.8 in August of last year, this series has been steadily falling.  However, the ISM indicates that at its current level the index is consistent with 2.6% GDP growth, a pace that should not generate cause for alarm.  The index levels of roughly 60.0 late last year were the highest in a decade and were consistent with GDP growth of between 4.0-4.5%.  While the murky trade situation has softened the manufacturing sector it has not pushed it over a cliff.  Furthermore, the solution is not lower interest rates but a solution to the trade difficulties with China in particular. 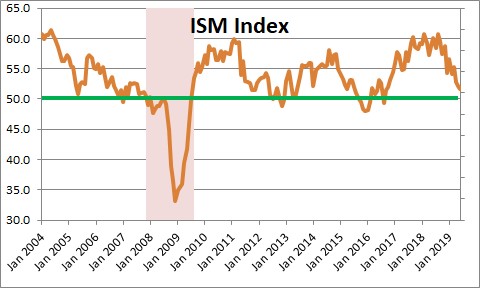 The market jumped on the minuscule 75 thousand increase in payroll employment for May as clear evidence that a slowdown was underway.  Unfortunately for the lower rates crowd, June produced a solid increase of 224 thousand.  The three month moving average increase in payroll employment now stands at 171 thousand.  While clearly less than the 235 thousand average increase last year, with the economy at full employment it is exactly what one would expect.  There simply are not enough workers for employers to hire.  It is not a sign of weakness.  Rather, it is a sign of strength that the economy is growing as quickly as it possibly can.  Lower rates will not help. 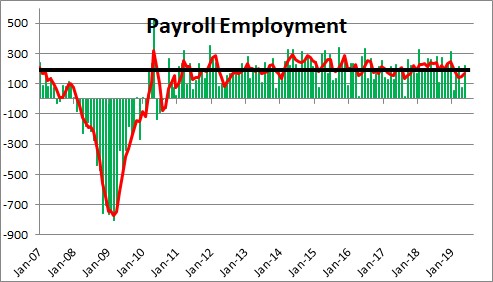 Looking ahead we should see an increase in the core CPI index for June of 0.2%.  The year-over-year increase should remain at 2.0%.  With somewhat larger increases in recent months we expect the core CPI to rise 2.2% this year and 2.4% in 2020.

Finally, on Friday, July 26 we will get our first look at second quarter GDP growth.  We expect to see a growth rate of 1.5% following a 3.1% increase in the first quarter.  While second quarter growth did slip, that is hardly a surprise given the steamier-than-expected first quarter pace.  In the first half of the year as a whole the economy will have risen 2.3% which is roughly in line with what economists had anticipated and presumably faster than potential growth.

While many FOMC members believe that rates will be 0.5% lower by yearend, there is a slightly larger number of members who believe that no rate cuts are required.  The jury remains out, but what we have seen in the past month suggests that the no-rate-cut crowd may be supported in July by one or more of their previously dovish colleagues.