The Deficit Explodes — But Who Cares?

The Congressional Budget Office recently released its updated 10-year budget forecast.  The budget deficit for the current fiscal year will be $3.3 trillion.  It remains in excess of $1.0 trillion every year between now and 2030.  Each year that the country incurs a budget deficit the Treasury must issue an equivalent amount of debt to finance the shortfall.  As a result, debt in relation to GDP is now the highest it has been since the end of World War II and is headed higher.  But nobody seems to care.  In fact, policy makers in Washington are itching to spend more and the odds are there will be another $1.0 trillion stimulus package passed sometime between now and the election.

CBO’s projected budget deficit this year is $3.3 trillion.  It shrinks to $1.8 trillion in fiscal 2021 and then averages $1.2 trillion every year thereafter.  Not long ago projected deficits of that magnitude would have produced an outcry of alarm.  Today – not a peep.  In fact, most of our leaders want to spend even more.  This is not, in our opinion, a sustainable situation. 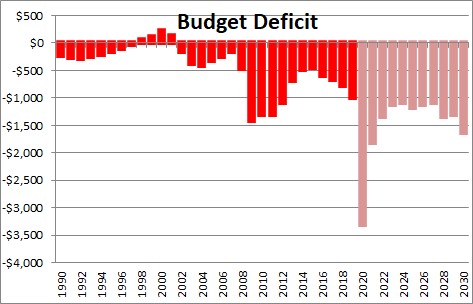 The best way to evaluate budget deficits is as a percent of GDP.  On that basis they average 5.0% of GDP for the rest of the decade.  Economists believe that a budget deficit that averages 3.0% of GDP is sustainable in the long run.  But we are talking about 5.0% of GDP, not 3.0%.  So what is the problem?  Not enough tax revenue?  Too much spending? 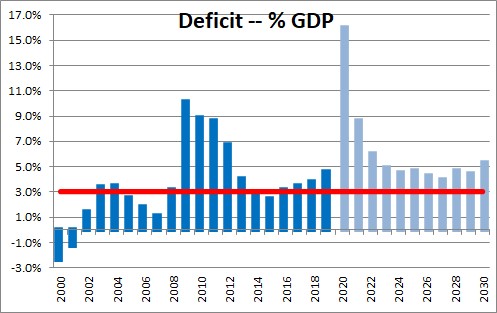 The problem is not too little tax revenue.  In the past 50 years tax revenue has averaged 17.5% of GDP.  From 2021-2030 the CBO estimates that tax revenue will average 17.4% of GDP.  We do not need and should not seek a tax hike to solve the problem. 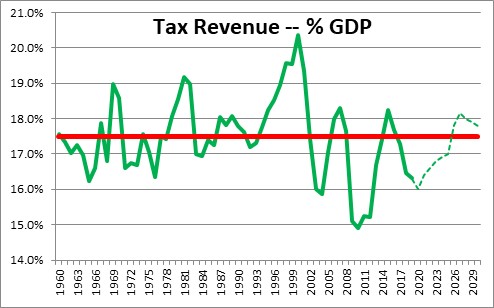 That means the problem is on the spending side.  Historically government expenditures average 20.5% of GDP.  From 2021-2030 the CBO estimates that such spending will average 22.5% of GDP.  Thus, excessive spending is the reason that budget deficits going forward average 5.0% rather than 3.0%.  The country is not spending too much on defense, homeland security, or education.  This “discretionary spending” will continue to shrink gradually for the next decade.  The problem is our aging population and growing entitlements.  In the next 10 years more and more adults will reach retirement age.  At 62 they can begin to receive Social Security benefits.  They can receive full benefits at age 67.  At 65 they become eligible for Medicare.  Plain old demographics are working to push budget deficits steadily upwards for years to come. 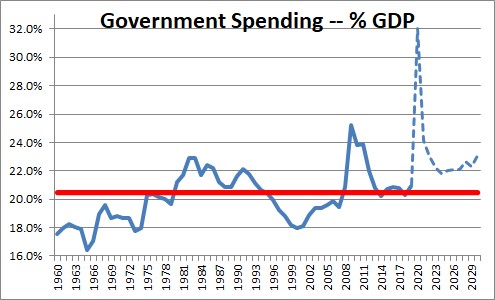 The steady diet of $1.0 trillion deficits will force the Treasury to issue an equivalent amount of debt.  As a result, debt in relation to GDP has soared from 79.2% of GDP in 2019 to 98.2% this year.  It will continue to climb to 117% of GDP in 2026 before gradually shrinking in the final few years of the decade.  Economists have long suggested that a debt to GDP ratio of 50% was sustainable, but have warned that if it climbed to 90% it could be a potential problem.  We are there.  To put that number in context, in Greece the debt to GDP ratio is 180%.  The U.S. is not Greece, but it is certainly moving in that direction. 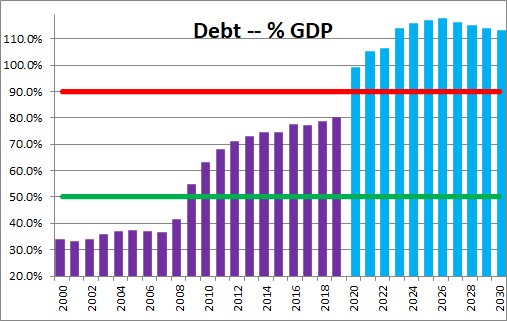 Is this seemingly excessive debt really a problem?  There is something called “Modern Monetary Theory” which says it is not.  While it is not widely accepted theory it does have a group of very vocal supporters, primarily the left wing of the Democratic Party which has latched onto the idea as a way to pay for very expensive programs like health care for all, a free college education, or a “Green New Deal” without resorting to middle-class tax increases.  We wrote about this back in May.  https://numbernomics.com/modern-monetary-theory-is-it-the-answer/

While we do not buy into the theory, the reality is that in a world where interest rates will remain low for the foreseeable future, a moderate increase in debt may not be as problematical as traditional Keynesian economists seem to suggest.

As noted earlier, the outsized deficits are being caused largely by an aging population, Social Security and Medicare expenditures in particular.  If we were inclined to shrink these deficits every economist knows how to do that.  That part is easy.

For example, with respect to Social Security one could gradually increase the age for full retirement benefits from 67 to 68.  Policy makers could reduce benefits for high income individuals.  For Medicare they could raise the age for eligibility from 65 to 68.  While solutions to the problem are relatively obvious, what is lacking is the will to implement those changes.

It is abundantly clear that none of this is going to happen any time soon – regardless of who wins the election in November. Nobody in Washington seems to care – Republicans, Democrats, the Administration, not even the Fed.  We can only conclude that in the past six months they have all become at least semi-believers in modern monetary theory.  Our kids are probably going to pay the price for that unfortunate choice.