The Dollar – Lots of Chatter but Expect Little Change

The dollar has fallen 7.5% in the past year.  Treasury Secretary Mnuchin said this week that a weaker dollar is good for trade.  That is in sharp contrast to the strong dollar policy advocated by every administration for the past 20 years and such a declaration sent the foreign exchange market into a tizzy and accelerated the dollar’s decline.  But then, one day later, President Trump says that Mnuchin’s comments were taken out of context and that a strong dollar is desirable.  So, what is the administration’s trade policy?  We don’t know.  This administration has routinely made conflicting statements on many topics in the past year.  So, why has the dollar been declining?  And what might it do for the balance of this year? 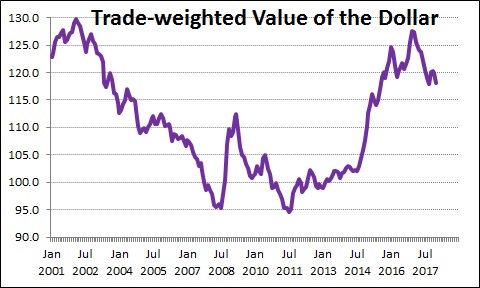 Let’s back up for a moment.  The dollar began a dramatic increase of 20% between mid-2014 and January 2016.  Why?  Because the Fed told us in mid-2014 that it intended to raise rates “soon” and thereby signaled its intention to end the ultra-easy monetary policy that had existed for the previous six years.  It followed through on that promise and raised the funds rate from 0% to 0.25% in December 2015. and it has continued to boost rates gradually for the past two years.  The funds rate today stands at 1.25%.  Meanwhile, central banks elsewhere – the U.K., Europe, and Japan — showed no interest in ending their ultra-easy monetary policies. As a result, the dollar rose dramatically.

Following Trump’s surprising election as president last year the dollar rose further as the expectation of individual and corporate income tax cuts, repatriation of overseas earnings, and a reduction in the rather stifling regulatory environment created the prospect of even faster U.S. GDP growth in the U.S., which made it an even more attractive place to invest.  The dollar rose farther.  But Trump ran into a stumbling block when he was unable to reform health care and the markets began to question his ability to deliver the promised tax cuts.  The dollar began to slide in February of last year.

In the middle of last year, it became apparent that economic activity in the rest of the world was on the upswing.  In October the IMF raised its global GDP forecast for 2018 by 0.1% to 3.7% which would be the fastest global growth rate since 2011.  This past week it raised that forecast by another 0.2% to 3.9%.  Growth rates were revised higher not only for the U.S., but for Europe, China, Japan and many of the emerging countries.

The reasons for faster growth vary depending upon exactly where you look.  Tax cuts – the corporate tax cut in particular – have boosted the U.S. GDP outlook.  Super easy monetary policies throughout much of the world – the U.S., the U.K., Europe, and Japan – finally seem to be paying dividends.  And oil prices are rebounding.  When oil prices plunged in 2014-2015 oil exporting economies were crushed.  Growth slowed for all and some oil-exporting countries slipped into recession.  But as oil prices have rebounded the GDP outlook for all oil-exporting countries like Canada, Nigeria, Brazil and many OPEC countries is far brighter.

The point is that, since the middle of last year, investors have decided that the prolonged period of slow growth in Europe, Japan, and steadily diminishing growth in China and many emerging economies has finally come to an end.

Stock markets in all regions of the globe have soared.  The MSCI All World Stock Index has risen 27% in the past year eclipsing even the eye-popping 24% increase in the S&P 500 index.  Suddenly, the rest of the world is as attractive – if not more attractive – then the United States.  Against this background, it is not surprising that the dollar’s slide, which started in February of last year, has continued. 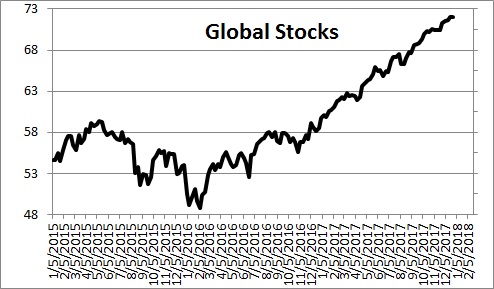 The world has been reacting to the changes in relative growth rates around the world for the past year.  The question is how much farther the dollar will slide.  Trump keeps talking about building his wall along the border with Mexico, branding China as a currency manipulator, imposing sharply higher tariffs on a broad array of goods imported from China, and withdrawing from NAFTA.  He may get some funding for his wall as a quid-pro-quo for passing an immigration reform bill.  But he cannot threaten China very much because he needs them to help keep North Korea in check.  He is not going to withdraw from NAFTA, but he could re-negotiate some parts of the agreement which actually need to be re-vamped.  The bottom line is that his trade agenda this year is unlikely to trigger a further sharp decline in the value of the dollar.  And despite Mnuchin’s comments, we do not believe that the administration wants a weaker dollar.  But who knows what they will say tomorrow.

The bottom line is that we expect the dollar to fall about 3.0% this year.  Compared to the 20% run-up in 2014-2015, the further drop expected for this year should have little impact on either GDP growth in 2018 or on the inflation rate.  We look for GDP growth rate of 3.0% in 2018 compared to a 2.5% gain last year.  But that growth comes from solid 2.8% growth in consumer spending combined with a robust 7.0% pace of investment spending.   Trade should have little impact on GDP growth in 2018. 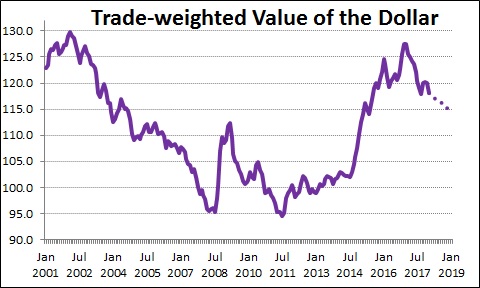