The surge in COVID cases that began in mid-December took a toll on economic activity in December and is likely to further suppress growth in January.  While less deadly than earlier versions of the corona virus, the sheer number of cases has forced people to stay home either because they got sick or they were forced to quarantine because they were exposed to someone who had contracted COVID.  The underlying economy still seems solid and should expand at a respectable 4.9% pace in 2022 although the pace of economic activity for any given month will shrink or soar in sync with COVID.  In addition to the virus, miserable weather throughout much of the country curtailed travel during the important holiday season and undoubtedly contributed to the December softness and is likely to further suppress the January data.  But drawing on the experience from other countries, the Omicron variant spreads dramatically in its early stages, but then declines almost as rapidly in subsequent weeks.  And bad weather eventually returns to normal.  This suggests that economic activity should rebound in February and March.

COVID cases began to climb in mid-December but soared in the past two weeks.  While not nearly as deadly as the earlier variants, the sheer number of cases is overwhelming hospitals which are dealing with extreme staff shortages and exhausting the doctors and nurses that remain on duty.  However, countries that have already experienced the Omicron variant like South Africa and the U.K.  saw cases reach a peak 3-4 weeks after the initial outburst and then plummet in subsequent weeks.  If that experience holds true for the U.S., cases should peak within the next two weeks. 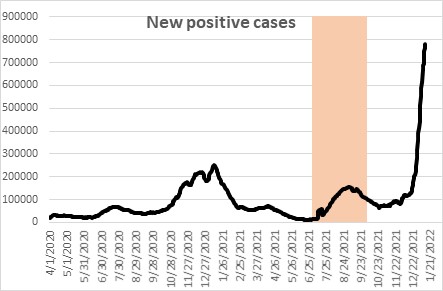 The economy has systematically slowed and soared in sync with the rise and fall of the virus.  Two years ago when the virus first appeared Americans were scared.  The Trump Administration imposed a quarantine in March 2020 which caused GDP growth to plummet 31% in the second quarter.  But once the quarantine was lifted and the economy began to re-open, growth soared by 34% in the third quarter of that year.

The virus re-accelerated in the summer of 2021 and GDP growth in the third quarter of 2021 slowed to 2.3%.  The virus subsided in October and November and it appears that GDP quickened to about 5.5% in the fourth quarter.  (Our first look at fourth quarter GDP will occur on January 27.)

There is no real reason to expect a different pattern this time although the extent of the slowdown and its duration are uncertain.

It is important to remember that in addition to the rising number of COVID cases, the December weakness was exacerbated by bad weather with snow and ice storms blanketing much of the Northeast and Midwest which cancelled thousands of air flights.  But, as is always the case during the winter months, bad weather can temporarily suppress economic activity but eventually the weather returns to normal and growth rebounds.

Initially we expected GDP growth of about 8.0% in the fourth quarter as the virus slowed dramatically in October and November.  But as it re-accelerated we have gradually chopped our fourth quarter GDP growth rate to 5.5% because of the robust pace of economic activity in the first two months of that quarter.

We continue to expect first quarter GDP growth of 5.2% but that forecast is less certain.  Our expectation is that December and January will be soft as the virus takes a toll, but February and March will re-accelerate as the virus once again subsides.

What seems clear is that the labor market will remain extremely tight throughout this period of time.  The unemployment rate at 3.9% is already below the Fed’s presumed 4.0% full employment threshold.  The latest data on layoffs, and the number of people receiving unemployment benefits through early January (which fell to a 50-year low), suggest that the labor market has not weakened appreciably.  Job openings are at a record high level.  Firms cannot find as many workers that they need.  This will push wages steadily higher and keep upward pressure on the inflation rate. 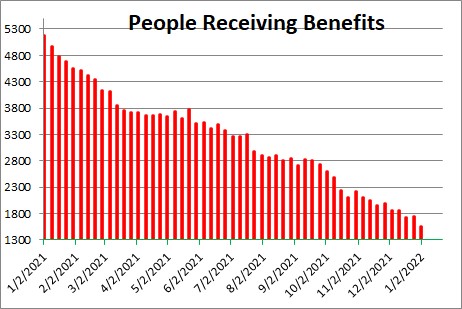 If the economy rebounds in February and March, liftoff for the Fed’s first rate hike still seems to be March 16.

In short, the combination of the current rapid spread of the virus and bad weather weakened growth in December and probably January, but should then stimulate growth in February and March.  GDP growth for 2022 should remain at about 4.9%, the core CPI inflation rate should rise 5.2%, and the funds rate should end the year at 0.75-1.0% which is still extremely low.