The Economy Refuses to Roll Over

During the next two weeks we will get our first look at third quarter GDP growth which is expected to be about 2.5%.  A week later payroll employment should rise 230 thousand in October while the unemployment rate remains at 3.5%.  These data will confirm that the economy has far more underlying strength than is generally perceived.  If the Fed is going to have any hope of slowing inflation to 2.0%, it will have to keep going.  Having raised the funds rate from 0% at the end of last year to an expected 4.5% by the end of this year the Fed has done the bulk of the heavy lifting.  But it cannot stop tightening until inflation shows clear-cut evidence of fading.  With that in mind we are encouraged that home prices have finally begun to decline and are likely to continue falling for some time to come.  Eventually lower home prices will translate into falling rents which will feed directly into the CPI and help curtail the inflation rate.  That is what the Fed needs to see before it has the luxury of ending the steady upward trajectory of short-term interest rates.  Unfortunately, that process will take time.

We will get our first look at third quarter GDP this coming Thursday, October 27.  It is expected to rise 2.5%.  Growth of that magnitude in the third quarter should dispel the notion that the economy is currently in a recession.  But that is not necessarily good news.  It means the Fed will need to push the funds rate higher to bring about the desired combination of slower growth and reduced inflation.

The following week we get the employment report for October on Friday, November 4.  Economists generally anticipate an increase in payroll employment of 230 thousand (versus an average increase of 372 thousand in the past three months), and no change in the 3.5% unemployment rate.  With virtually every industry reporting an inability to find enough bodies, one wonders how firms were able to hire 230 additional workers in October.  If the unemployment rate is unchanged at 3.5% then, presumably, the labor force also increased by 230 thousand.  But in the past six months the labor force has risen by just 50 thousand per month.  Where did all these people come from?  Could it be that some of those workers who retired in the past year when the stock market was soaring and home prices skyrocketed decided to un-retire?  It is possible.  Their stock portfolio has shrunk by more than 20% since the beginning of the year and the price of their home has also  begun to decline.  Maybe it is time for a re-think.

Certainly, 2.5% GDP growth in the third quarter coupled with a solid 230 thousand increase in employment in October – the first month of the fourth quarter – should convince even the diehards that the economy is not yet teetering on the brink of recession.  But even if a recession is not here yet, everyone will continue to believe it is a virtual certainty at some point.  We will re-state our long-held belief that for that to happen the Fed needs to push the funds rate above the inflation rate.  Even if the Fed boosts the funds rate to 5.0% early next year, the core CPI is not expected to fall below the 5.0% mark until mid-2023.  Once that happens, there will still be some period of time before the economy finally begins to contract.  We expect the long-anticipated recession to begin early in 2024 and last until the middle of that year.  It is not here yet, but it still seems inevitable.

Meanwhile, the inflation rate remains at an uncomfortable level.  The core CPI has risen 6.0% in the past year.  While slightly below its peak level of 6.5% in the spring its slowdown has been very gradual.  A return to 2.0% appears unlikely until late in 2024.  The direction is right, but the speed of decline is agonizingly slow. 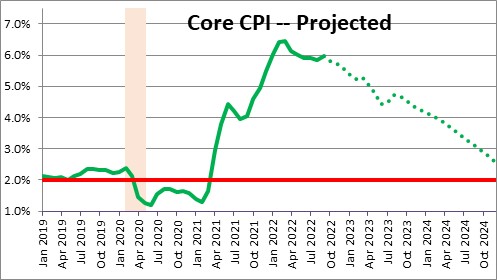 Having said all that, home prices have begun to decline.  This past week we got data for existing home prices.  They declined 1.8% in September after falling 1.9% in August and 3.5% in July.  Home prices seem certain to continue their slide in the months ahead. 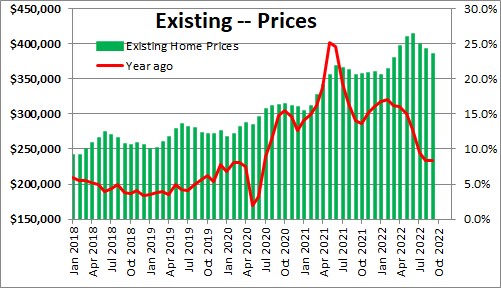 But home prices are not included in the CPI.  They are regarded as an investment rather than a monthly expenditure.  What goes into the CPI, instead, is rents which are a monthly expenditure.  It turns out that rents lag the change in prices by about a year.  If rents – which are one third of the entire CPI index –start to fall significantly by the middle of next year it will help the Fed in its effort to control inflation.  That is a step in the right direction, but it is unlikely to bring any meaningful improvement in inflation until next summer.

In short, the economy is still chugging along.  The Fed will need to further increase the funds rate.  Improvement in the CPI will be frustratingly slow.  And a recession is still on the horizon.