The Fed is Far Too Pessimistic

Economists often use the Fed’s forecasts as a benchmark for their own.  And why not?  The Federal Reserve system has more than 1,000 of the smartest economists in the business.  They have the bodies to closely analyze every aspect of the economy.  But that does not mean their view is always correct.  And never has the Fed been more off the mark than in recent months.  It has had, and continues to have, a very pessimistic view of the economy.  As a result, the Fed believes the economy will not achieve full employment until 2023 and its first tightening move will not come until 2024 at the earliest.  But is its pessimistic view correct?  We believe the economy will grow more quickly than the Fed expects and may actually approach full employment by December 2021.

In mid-June the corona virus was spreading rapidly  At that time, the Fed expected GDP to decline 6.5% in 2020 and the unemployment rate to end the year at 9.3%.  But suddenly employment, retail sales, and housing came roaring back.

For example, roughly half of the 22 million jobs lost in March and April were regained by August with an additional increase of one million workers projected for September.  As a result, the unemployment rate has dropped from a peak of 14.7% in April to 8.4% by August and should fall further to 7.8% in September. 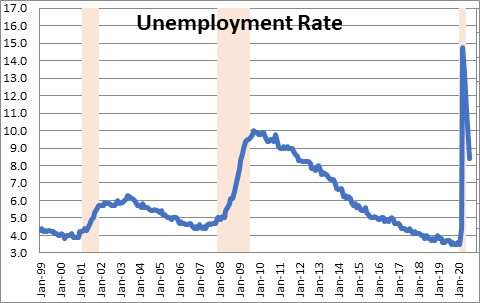 Retail sales plunged in March and April, but they have come roaring back fueled by the $1,200 tax refund checks and expanded unemployment benefits.  In fact, the August level of sales surpassed the pace that existed prior to the recession. If employment increases by one million workers in September, income will rise and retail sales will continue to climb. 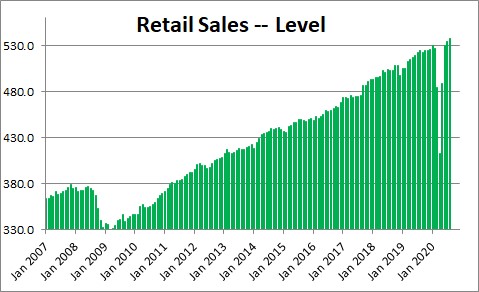 Following sharp declines in March and April both new and existing home sales have taken off.  New home sales skyrocketed to 1,011 thousand in August which is the fastest pace of sales since September 2006.  This dramatic upswing is attributable to a record low 2.9% mortgage rate, the $1,200 tax refund checks, and pent-up demand from sales postponed during the recession.  Sales would be even faster if there were more homes available for sale.  There is currently a 4.2 month supply of new homes on the market which is far below the 6.0 million supply that is required to balance supply and demand.  Home sales will continue to climb. 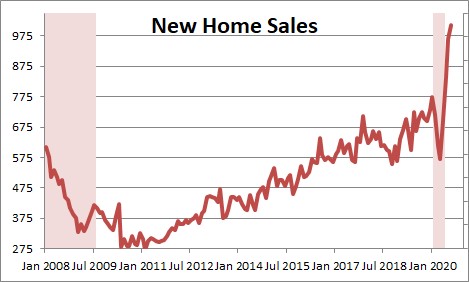 Given these robust data the Fed still believes that GDP will decline 3.7% this year and the unemployment rate will fall to 7.6% by December. But remember, three months earlier it thought GDP would decline 6.5% and the unemployment rate at yearend would be 9.3%.  This is an astonishing shift in view in a 3-month period of time.  Furthermore, we believe its forecasts are still too pessimistic.

The Fed expects GDP to decline 3.7% for the year.  That is simply an average of GDP growth rates for each of four quarters.  But we know GDP fell 5.0% in the first quarter and an additional 31.7% in the second quarter.  For the yearly average to decline 3.7% the Fed must expect GDP growth for the third quarter of perhaps 18% and a fourth quarter GDP growth rate of about 4.0%.  It is basic math.

However, we are looking for third quarter GDP growth of 28.0%.  The Atlanta Fed is at 32.0%.  Furthermore, the economy still has plenty of momentum.  Through mid-September both layoffs and the number of people receiving unemployment insurance benefits decline steadily each week. That means that employment is still rising and the unemployment rate declining.  That process should continue – but at a slower pace — throughout the fourth quarter.

Given this more robust pace of economic activity in the second half of the year, we expect the unemployment rate to be 6.6% at yearend versus the Fed’s projected 7.6%.

Looking ahead to 2021, our relatively optimistic view is based on the notion that a vaccine will be available by the end of this year which will allow all of us to feel safer going out to a restaurant, flying, staying in a hotel, going to a concert.  If that is the case, the sectors of the economy that have not yet participated in the vigorous upturn will join the pack and GDP growth in 2021 will be 5.3%.  The Fed is looking for more modest growth rate of 4.0%.  As a result, by the end of next year we believe the unemployment rate will decline to 4.4%.  The Fed believes it will end 2021 at 5.5%.

The difference between these projected unemployment rates is important.  The Fed currently estimates full employment at 4.1% — which is now its primary goal.  But not a single Fed official believes the unemployment rate will reach that level until sometime in 2023. No wonder the Fed does not expect to raise rates until 2024 at the earliest.

But if we are right the economy achieves full employment by the end of 2021 – two years earlier than the Fed expects, which means the Fed’s first move toward higher rates could begin sooner.

The point of all this is that nobody’s forecasts — neither our own, nor the Fed’s– are gospel.  The Fed can blow it just as easily as the rest of us and it recently has been struggling with a steady diet of far stronger-than-expected economic indicators that are inconsistent with its pessimistic view of the economy.   Having said that, we are all currently trying to anticipate the likely course of the corona virus, how quickly a vaccine can become readily available, and how soon we will all feel comfortable venturing farther from home.  These are not the typical factors that economists look at in determining GDP growth.  We are all guessing.  The Fed today says it is unlikely to tighten before 2024.  That may be right, but it could happen sooner.  Stay tuned.