The jobs gains in February and March reflect the steady re-opening of the country as the pandemic is brought under control.  For this reason alone, economic growth in the first and second quarters of this year is going to explode as previously unemployed workers return to their jobs.  We currently anticipate GDP growth of 6.0% and 9.0%, respectively in those two quarters.  But then there is the matter of the $1,400 checks that are being distributed as this commentary is being written.  They will fatten consumers wallets to such an extent that GDP growth for the year could be far more rapid than economists currently expect.  For what it is worth, we look for 2021 GDP growth of 7.5%.  But if consumers shrug off their COVID fears and regain their mojo, we could easily be talking about double-digit growth for the year.  Here’s why.

Payroll employment surprised to the upside in March with an increase of 916 thousand.  This follows a February gain of 468 thousand.  The February increase was almost certainly held in check by the series of snow and ice storms that paralyzed economic activity in most the Midwest (think Texas) and the Northeast in that month.  The March increase was bolstered as the weather returned to normal.  Thus, average growth for the February/March period of 692 thousand is probably a reasonable estimate of the underlying pace of jobs growth over that 2-month period.  That is in stark contrast to an average monthly jobs increase of just 64 thousand per month in the three-month November to January period as the virus began to spread more rapidly and employers feared a renewed economic shutdown.  Given that the number of new COVID cases daily has fallen dramatically since early January when it was at its peak of 250 thousand, and vaccines are being injected at the rate of more than 2.0 million daily, employers have quite clearly decided that the end is in sight, that consumer spending is going to pick up dramatically, and they need to boost production quickly.

Despite sizable gains in the past two months, payroll employment remains 8.4 million below its February 2020, pre-pandemic peak.  But it is closing the gap quickly.  Most of the missing jobs are in the service sector.  Specifically, jobs in the leisure and hospitality industries are 3.1 below their February 2020 level.  Teachers – in both the public and private arenas – are 1.2 million below their peak.  Those two categories were hard hit by COVID.  Given the solid February and March job gains, which coincide with the time when the number of COVID cases began to decline sharply and the vaccine distribution process gained momentum, our expectation is that most of those jobs will return quickly as consumer and business confidence climbs rapidly in the months ahead.  Indeed, our forecast calls for job gains of 5.9 million between now and yearend or 650 thousand per month.  If that is the case the unemployment rate should decline to the 4.0% mark by yearend.  That is an important level because the Fed believes that full employment is achieved when the unemployment rate reaches 4.1%.  At full employment, theoretically, everyone who wants a job has one. 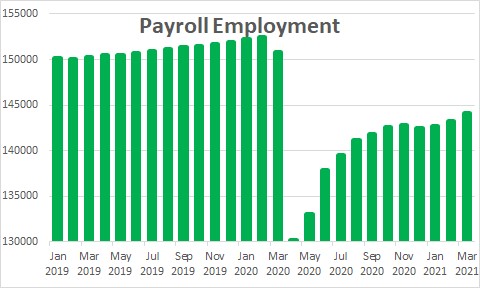 Additional evidence that the economic rebound is quickly gathering momentum comes from the purchasing managers index which jumped 3.9 points in April to 64.7 which is its highest reading since December 1983. 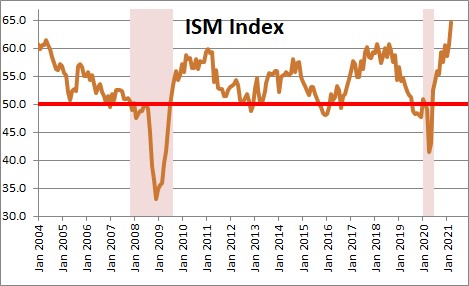 But one other thing to consider.  The federal government is currently distributing $1,400 checks to most taxpayers.  We have not yet seen the March data for consumer income and spending, but when they are received at the end of April, we should see the savings rate surge to the 30.0% mark.  If that forecast is accurate, there will be $6.6 trillion of savings in the U.S. economy.  If the savings rate were 6.0% which is its long-term average, savings would be $1.3 trillion.  This suggests that consumers will have $5.3 trillion of surplus savings which they are free to do with what they wish.  Some of that may find its way into the stock market and other investments, but our guess is that most of that windfall will get spent. 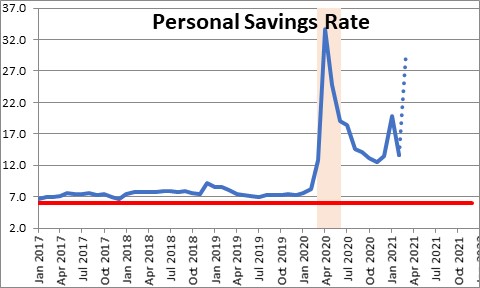 Our GDP forecast calls for 7.5% GDP growth this year.  That implies an increase in GDP of $1.4 trillion.  If consumers get their mojo back and want to go back to restaurants and bars, take that long-postponed trip to the Grand Canyon or that African safari, spend money on airfares and hotels, and go to sporting events, they should have – thanks to the government — $5.3 trillion of savings tucked away to make that happen.

We have not yet seen solid evidence of that renewed desire to spend, but the March and April data on consumer income, spending, and the savings rate, could give us a sense that the economy is going to grow much more quickly this year than any of us expect at the moment.  If we had any courage, we would boost our GDP growth forecast for the year to the 10.0% mark.  Hang on to your hats!

One final thought.  GDP growth for the year of 7.5% (or higher), a moderate pickup in inflation to 2.5% or so (which will give businesses a bit of pricing power), and a pledge by the Fed not to raise rates for the foreseeable future, is a dynamite scenario for the stock market.  No wonder the stock market sets one new record high level after another! 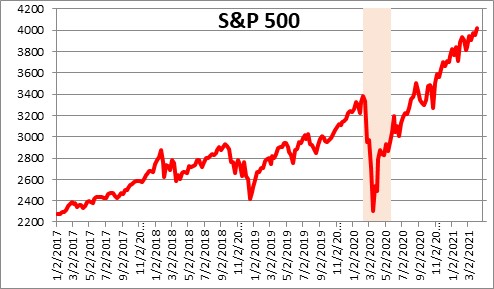