The economic outlook for every year depends on fiscal policy.  But this year more than ever events in Washington are likely to overshadow decisions made on Main Street.

Consumers finally woke up to the potential negative consequences associated with the “fiscal cliff” as sentiment fell sharply in December.  Nevertheless, at 74.5 they seem to believe that the worst will be avoided and the economy will expand at a moderate pace in 2013.  They have ample justification for enthusiasm. 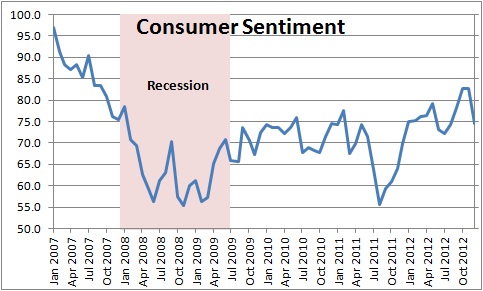 During the recession consumers lost 25% of their net worth as the stock market collapsed and home prices plunged.  But in the three and one-half years since the expansion ended, they have recovered the bulk of what they lost thanks to rising stock prices.  Now that home prices are finally beginning to turn upwards it is easy to imagine consumer net worth reaching a record high level sometime next year. 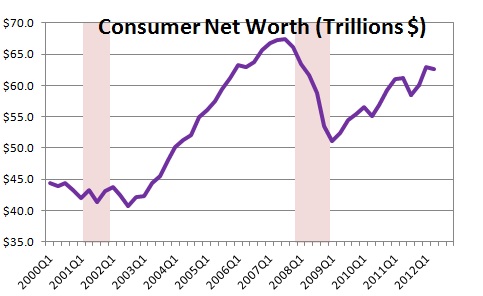 At the same time consumers have reduced debt and gone from a record high level of debt in relation to income at the start of the recession, to a debt to income ratio currently that is the lowest since 1980.   Consumers clearly have the ability to step up their pace of spending if they so choose. 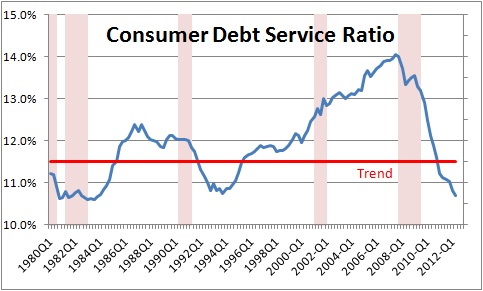 Meanwhile mortgage rates have fallen to 3.4% and are headed lower as the Fed continues to purchase $40 billion per month of mortgage-backed securities.  By this time next year mortgage rates are likely to be at the 3.0% mark.  Combining record low mortgage rates with a 30% drop in home prices means that housing is more affordable than it has been in 40 years. 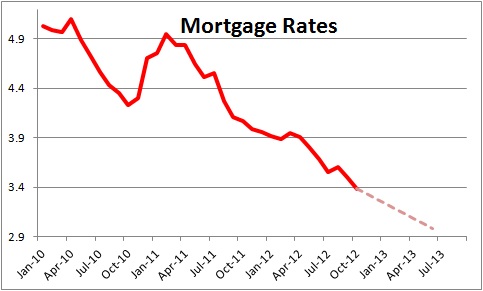 Most importantly, the housing sector has finally turned the corner.   The Census Bureau tells us that 1.3 million new households are formed every year and those people need a place to live – a house or an apartment.  Thus, housing starts must climb 1.3 million annually just to keep pace with population growth.  Unfortunately, housing starts have been rising at one-half that pace for the past five years.  Builders were hurt badly by the recession and have been reluctant to jump back into the market.  Even ones who were so inclined had difficulty finding financing.  So for five years demand has far exceeded supply.  As a consequence vacancy rates have plunged, shortages of available homes have begun to emerge (especially for homes valued under $250,000), rents have been rising, and home prices have begun to climb.  Construction of single-family homes and apartments will accelerate throughout 2013 as builders race to catch up with demand. 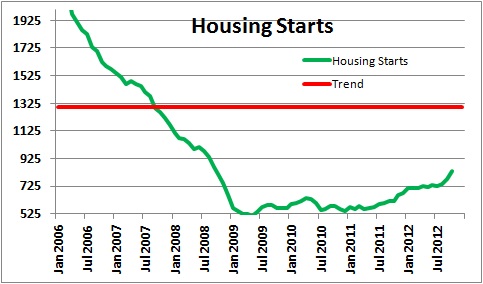 Given this housing shortage it is a sure bet that home prices will continue to climb.  After hitting bottom in January, home prices have been rising at a 7.0% annual rate.  This will not only encourage fence sitters to jump into the market to purchase homes, but fewer current homeowners will be “upside down” and owe more than their home is worth.  That implies fewer foreclosures and short sales which have depressed home prices for several years. 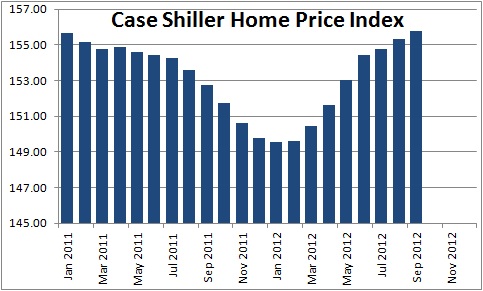 Business leaders in the U.S., like consumers, are relatively upbeat.  They have ample justification for such a view.  First, the stock market has been rising steadily since the expansion began in mid-2009.  As stock prices climb, CEO’s can issue additional shares of stock and thereby bolster the firm’s capital. 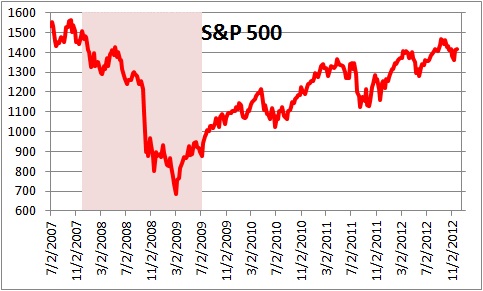 Because corporations cut costs so sharply during the recession and boosted productivity, profits have risen to a record level and continue to climb at a 6% annual rate.  As a result of this extraordinary growth in profits and relatively few investment opportunities, corporations have accumulated a mountain of cash.  If lucrative investment opportunities should arise, firms have ample cash to deploy.  If such opportunities do not materialize, CEO’s are likely to return some of that cash to investors in the form of a special dividend. 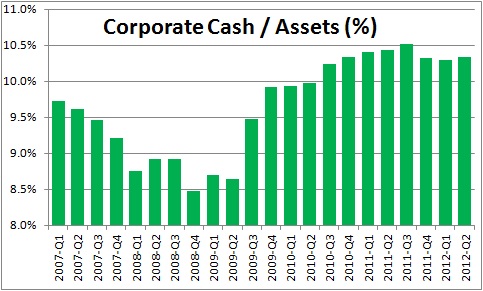 Meanwhile, borrowing rates for corporations are the lowest in 50 years.    Depending upon their credit rating firms can issue 20-year bonds at rates between 3.5-4.5% 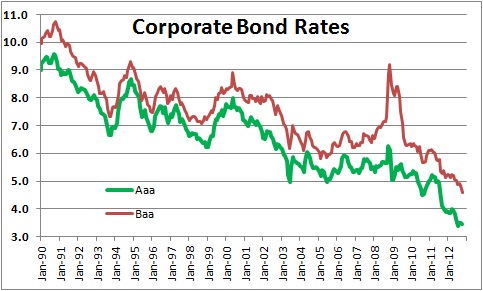 Not only are interest rates low, credit is readily available.  Larger corporations can tap the commercial paper market at rates very close to 0%.  They might choose to issue bonds.  Or they might turn to banks which are finally making funds available to the business community.  Commercial and industrial loans have climbed 13% during the past year. 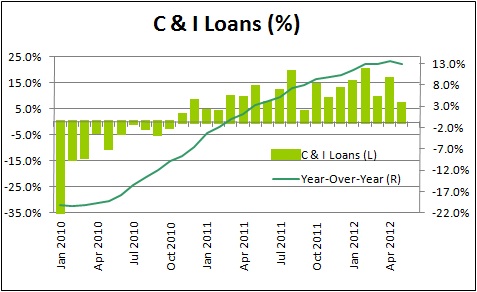 Despite corporate leaders confidence, record profits, a pile of cash, the lowest borrowing rates in 50 years and credit readily available, investment spending has slowed steadily throughout 2012, and actually declined slightly in the third quarter.  Why?  Uncertainty. 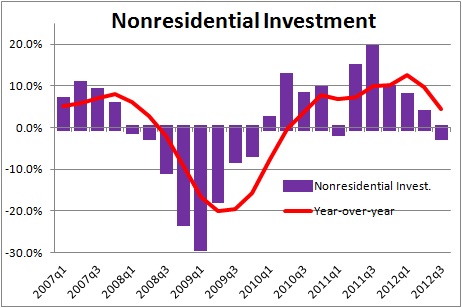 Employment growth has been sluggish at about 150 thousand per month.  Many employers have postponed plans to hire additional workers.   Why?  Uncertainty.  Uncertainty about both the fiscal cliff and longer-term budget deficit and debt problems. 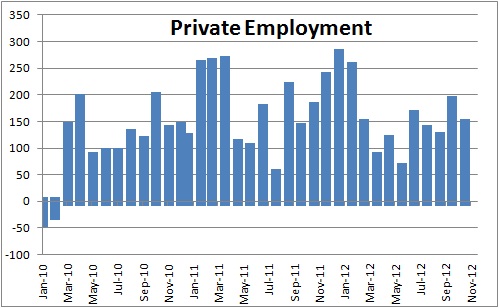 Given its unwillingness to raise taxes or significantly cut government spending prior to the election, Congress has created a nightmare.  A variety of tax rates will increase at yearend – individual and corporate income taxes, the payroll tax, and the alternative minimum tax amongst them.  Defense and nondefense spending will be chopped, unemployment benefits will shrink from 99 weeks to 26 weeks.  This combination of higher taxes and reduced government spending will reduce GDP by $640 billion in 2013 or roughly 4.0%.

To put that amount in context, the $787 billion fiscal stimulus bill passed in February 2009 was sufficiently large to turn around an economy that was threatening to slip from recession into an outright depression.  Given that stimulus package, GDP growth turned upwards within six months and the recession ended in June 2009.  If Congress does not act by yearend, the economy will encounter a powerful $640 billion headwind that will almost certainly push it back into recession.  If one believes the trend rate of GDP growth in 2013 might be 3.5%, a 4.0% headwind would push it back into recession.

Such an outcome would be catastrophic.  Consumer and business confidence would collapse as it becomes apparent that our lawmakers are paralyzed.  The stock market would plunge.  Net worth would shrink.  Jobs would be lost.  The unemployment rate would climb from 7.7% today to 9.0% or higher by the end of next year.

While these differences are important, the reality is that Republicans and Democrats agree on many issues.  Nobody wants to see tax rates on middle or lower income wage earners increase.  Nobody wants to see the alternative minimum tax ensnare a larger group of individuals.  Nobody seems to think this is good time to sharply cut defense spending.  If the President and Congress agree to postpone those particular tax increases and the cuts in defense spending for another year, the impact of the cliff would be reduced from $640 billion to $265, and the negative impact on GDP would be sliced from 4.0% to 1.5%.  Re-doing the math, if the trend rate of GDP growth in 2013 is 3.5% a 1.5% headwind would reduce it, but to an acceptable rate of 2.0%.

It is not difficult to mitigate the negative impact of the cliff on GDP growth from 4.0% to 1.5%.  All that is necessary is willingness to compromise.

Solving the fiscal cliff problem does nothing to resolve our longer-term budget and debt issues.  We simply kick the can down the road for another year.  Firms will remain reluctant to hire and invest.

There can be little doubt that the U.S has a longer-term budget deficit problem.  In each of the past four fiscal years the U.S. has had a budget deficit in excess of $1.0 trillion.  When a country has a budget deficit it spends more than it collects in taxes.  It must borrow the difference.  During that four year time frame the U.S. added more than $5.0 trillion to the national debt. 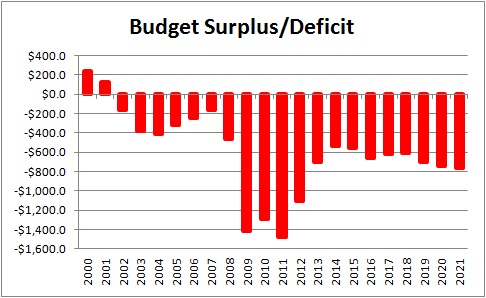 Budget deficits will shrink somewhat during the next couple of years as the economy recovers, but will climb again in the second half of the decade.  Why?  Because the baby boomers are beginning to retire.  They were born between 1946 and 1964.  If they work to age 67, they will retire between 2013 and 2031.  As they retire they collect Social Security benefits.  They become eligible for Medicare.  The ever increasing pool of retirees will steadily boost budget deficits through 2035.

As budget deficits soar, the Treasury will need to issue an equivalent amount of debt to finance them.  One way of assessing the debt problem is to look at the ratio of debt to GDP which essentially measures our ability to pay it back.  That ratio climbed from 35% prior to the recession to 75% today.  As the baby boomers retire that ratio will climb further to 186% of GDP by 2035. 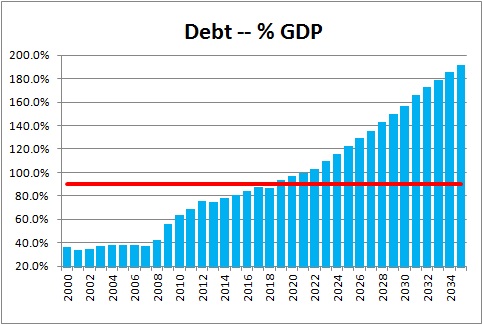 Most economists believe a country will have difficulty financing its debt when its debt to GDP ratio reaches 90%.  At that level government borrowing is so pervasive that it sops up most of the funds available for investment.  There is little left over for the private sector.  As a result, both productivity and that country’s standard of living will grow more slowly.  At the same time foreign investors may question that country’s ability to repay its debt and shift their investments elsewhere.

A debt to GDP ratio of 186% is a serious problem.  It roughly equivalent to what Greece has today.  We do not want to go there!

To address this debt problem, President Obama appointed a bipartisan commission in February 2010 – 9 Republicans and 9 Democrats — to, essentially, fix everything.  It became known as the Simpson-Bowles commission.  Nobody expected them to reach an agreement.  But they did!  A majority of 11 members voted in favor of the commission’s recommendations which, essentially, raised taxes a little and cut spending a lot.  Here is a sampling of their recommendations:

Individual income taxes.  They proposed three tax brackets 8%, 14%, and 23% (compared to a top bracket of 39% today).  Eliminate most tax deductions.  This recommendation would boost individual income tax revenues despite the lower tax rates.

Social Security. Reduce benefits, particularly for high income individuals.  Gradually increase the retirement age from 67 to 68 years.  Increase the payroll tax maximum from $168,000 to $196,000.  These changes would make Social Security solvent for the next 75 years.

Medicare/Medicaid. Essentially, make us pay more for our health insurance coverage.  For Medigap policies the first $500 of expenditures would not be covered.  Insurance would only cover 50% of health care expenditures between $500 and $5,000.  Raise the retirement age for Medicare eligibility to 68.

If the plan were adopted in its entirety, the projected debt to GDP ratio would shrink from 186% in 2035 to 40%.  By adopting these measures the fiscal health of the U.S. would be restored within 25 years!  It can be done!  Eleven of the 18 commission members set aside political differences and voted in favor of the recommendations because it was the right thing to do for the country.  It would put us on a course of fiscal responsibility for the first time in years.

But President Obama did not accept the recommendations because they cut entitlement spending too sharply.  Republicans complained that they raised taxes too much.  In the end, the commission’s recommendations were not adopted.  But because of its bipartisan support in late 2010, the Simpson-Bowles findings are being used as a blueprint for the budget negotiations that are taking place as we speak.  Our sense is that, following the election, both parties are more willing to negotiate.  Our operating assumption is that the negative impact of the fiscal cliff will be reduced from 4.0% to 1.5%, and that by the spring a plan resembling Simpson-Bowles will pass Congress.

If the economic scenario next year is remotely close to what has just been described and, simultaneously, we solve our longer-term budget deficit and debt issues, it will be a fantastic year!