The Recession is Over

The National Bureau of Economic Research has already indicated that the record breaking, 128-month expansion ended in February.  This means that the economy entered a recession in March, continued in recession in April, but returned to growth mode in May.  If that is correct, the 2020 recession will have lasted just two months — the shortest recession on record.  The NBER will not officially pronounce the demise of the recession for a number of months, but we think it is obvious that has happened.  Here’s why. 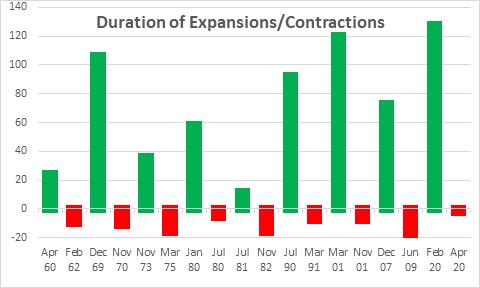 Most recessions are caused by imbalances in the economy which force the Fed into action.  Eventually higher interest rates begin to bite and the economy slips over the edge into recession.  That was not the case this time.  The recession was triggered by specific action taken by politicians in Washington and at the state level to curtail the rapid spread of the corona virus.  Given the nationwide shutdown the economy came to an abrupt halt in mid-March.  But then two things happened.  First, at the beginning of May firms started to re-open.  Second, the government with help from the Fed rained $2.5 trillion of cash on consumers and businesses.  That combination of events triggered a vigorous rebound in May. The recession was over as quickly as it began. Typically when a recession ends consumers gradually pick up their pace of spending.  Purchases of big ticket items like housing and autos lead the way followed by faster spending elsewhere.  Businesses initially work existing employees longer hours and, shortly thereafter, begin to hire new workers.  It is a relatively slow but steady process.   But this time there was, essentially, an on-off switch.  Somebody pressed the stop button and the economy immediately sank into recession.  Then they pressed the re-start button and the economy instantly began to grow again.  The magnitude of both the decline and subsequent rebound are unprecedented. Look at payroll employment.  It had been chugging along with steady increases of about 200 thousand per month.  Then in March it declined by 1.4 million workers.  Given that the largest monthly drop in employment previously was 803 thousand, it was obvious that the economy fell into recession in March.  That was followed by the loss of an additional $20.7 million workers in April.  But then payroll employment rose by $2.5 million workers in May despite the fact that the economy did not begin to re-open until mid-month.  As the economy continues to recover, we expect payroll employment to climb by an additional 7.0 million workers in June.  Changes in employment in the past several months are unprecedented in both directions. 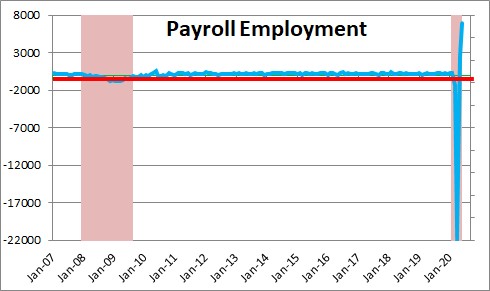 The same pattern is evident in retail sales. Sales were climbing steadily by about 0.4% per month until March when they fell by a then record-setting 8.2%.  Sales blew through that record-sized decline and plunged by an additional 14.7% in April.   But in May sales rebounded and surged by a record-breaking 17.7%. 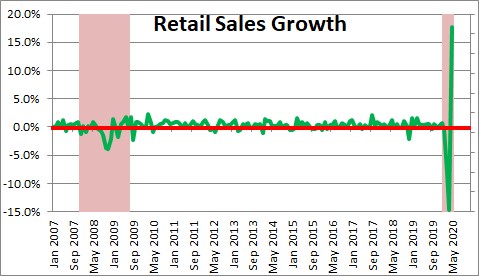 Given the dramatic drop in payroll employment, retail sales, and virtually every other monthly economic indicator in March it is easy to see why the NBER concluded that the expansion ended in February and the recession began in March.  On the flip side, the record breaking increases in payroll employment and retail sales in May make it equally obvious that the recession ended in April and the current expansion began in May. Given the timing of the downturn and the subsequent rebound it is not quite clear the exact magnitude of the second quarter GDP decline.  We currently expect a drop of 50% in the second quarter followed by an equally impressive 51% rebound in the third quarter.  If GDP continues to climb at a 7.0% pace in the fourth quarter it will have completely eliminated the recession-induced drop by yearend.  This sure seems like a V-shaped recovery to us. Some will undoubtedly argue that the economic recovery merely reflects fiscal stimulus and will, therefore, be short-lived.  The problem with that argument is that government spending is going to continue for some time.  There is already talk of another round of fiscal stimulus for consumers and a bailout for many state and local governments – even though we have not yet seen the results of the first round.  This is an election year and the Democrats have already proposed — and Trump is likely to support — another package of spending need it or not.  And do not forget the Fed.  Chair Powell has made it abundantly clear the Fed intends to keep buying U.S. Treasury securities, mortgages, and corporate debt, and continue to lend to money market mutual funds, to small business through the Payroll Protection Program, to medium-sized business through its Main Street Lending Facility, to large businesses through its Commercial Paper Funding Facility, and to state and local governments through its Municipal Liquidity Facility. Meanwhile, banks have $3.25 trillion of excess reserves which they can use to make additional loans.  Bank loans to businesses have risen at a 123% annual rate since February.  The money supply has climbed at a 55% annual rate in that same period of time.  There is no end in sight. Given all of this upbeat evidence on the economy, it is perhaps no great surprise that the stock market has recovered quickly from its early year decline.  After falling 32% from its peak the S&P 500 stock index is currently just 7.5% below its mid-February record high level. 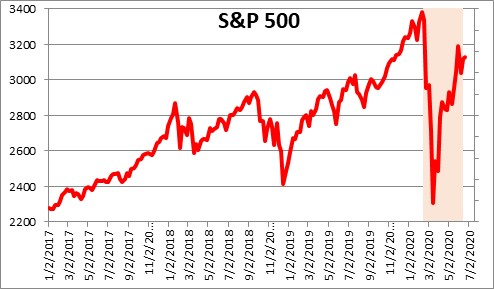 Back into growth mode!