With every passing week the pace of economic activity remains robust.  Signs of the long-awaited slowdown are elusive.  While logic suggests that the economy should sputter as fiscal stimulus abates, the incoming data suggest otherwise. The labor market and the housing market, in particular, are on a roll.  Following an expected 30.0% rebound in economic activity in the third quarter, we believe that GDP will continue to climb at a 10.0% growth rate in the fourth quarter.  American consumers and business people are proving to be amazingly resilient in the face of adversity.  Will growth in the 2020’s duplicate the “Roaring Twenties” of a century ago?

Over the next two weeks we will learn a lot.  We will get our first look at third quarter GDP growth on Thursday, October 29.  Following the 31.4% decline in the second quarter the consensus appears to be for an increase of 30.0%.  Most economists will probably attribute the rebound to fiscal stimulus and conclude that growth will slow dramatically in the fourth quarter and beyond.  We disagree.

Then comes the election on November 3, we read the polls like everybody else, but we also remember what happened in 2016.  If Democrats sweep the presidency and both houses of Congress, their growth initiatives will boost GDP growth, but probably not until 2022.  It will take them time to formulate the legislation and then implement the agenda. Republicans will do their best to delay things.  The outcome seems likely to affect GDP growth in the years 2022 and beyond rather than 2021.  Anything less than a Democratic sweep suggests that a legislative stalemate will continue for the foreseeable future.

On November 6 we get a very important piece of information — the October employment report which will show that the economy remains on a roll as the fourth quarter gets underway.  We believe that payroll employment will climb by a solid 1 million workers and the unemployment rate will decline 0.8% to 7.1%.  The consensus appears to be for an increase of about 600 thousand and no change in the 7.9% unemployment rate.  Those estimates appear to be way off the mark. The weekly data on initial unemployment claims, the number of people receiving unemployment benefits, and the insured unemployment rate, all point to continued strength in the labor market.

Part of the employment story every month is the number of layoffs – how many people lost their jobs.  The weekly claims data continue to decline.  In the past four weeks initial claims have fallen on average by 20 thousand per week, and this past week dipped below the 800 thousand mark for the first time since March.  Prior to the recession claims were averaging about 225 thousand per week.  People continue to lose their jobs and the labor market cannot be deemed healthy until they have fallen to their pre-recession level.  We have a ways to go. 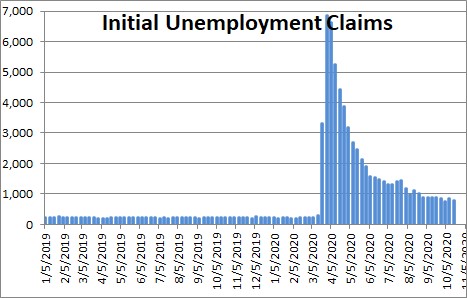 But there is more to the story.  While some workers lose their jobs, many more are being hired.  If 800 thousand workers lose their job in any given week but the number of people receiving unemployment benefits declines, then employment must have risen dramatically.  The number of people receiving unemployment benefits peaked at 25 million in early May.  In the most recent week it fell to 8.4 million.  In the past four weeks it has declined on average by 1.1 million per week.  Prior to the recession this series was fairly steady at 1.7 million.  There are 11 weeks to go.  Could the benefits data hit the pre-recession 1.7 million mark by the end of this year?  Probably not, but it might be close. 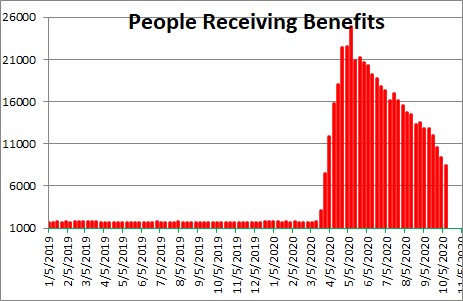 The same conclusion can be reached by looking at the insured rate of unemployment.  It is the number of people who are receiving unemployment benefits as a percent of the labor force.  It is not a completely accurate barometer of what is going to happen to the unemployment rate.  People can be unemployed and looking for work, but not receive unemployment benefits.  Those people will be counted in the official unemployment rate, but not in the insured unemployment rate.  Nevertheless, the two series behave similarly.  This series peaked at 17.1% in early May and has fallen steadily to 5.7% in the most recent week.  Indeed, in the past four weeks this series has declined 0.7% per week.  Prior to the recession this series stood at 1.2%.  It, too, could hit its pre-recession level by yearend.  For what it is worth, we expect the employment rate for October to decline 0.8% from 7.9% to 7.1%.  But the chart below suggests that an unemployment rate somewhere in the 6’s is not out of the question for October.  The labor market continues to improve faster than anyone expected. 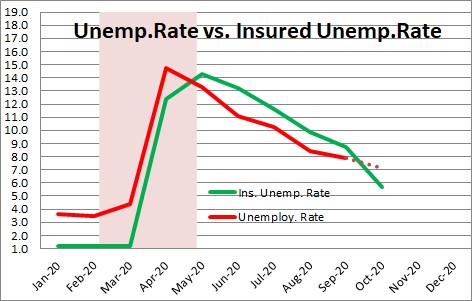 So how does all this impact our estimate of fourth quarter GDP growth?  It boosts it from 7.0% to 10.0%.  Most economists expect fourth quarter growth to be 2.0-3.0%.  We disagree.   Consider the following:

First, if payroll employment rises by 1.0 million workers in October and the weekly data continue to decline in mid-October, it is hard to imagine that employment will come to a screeching halt in November or December.  People have been expecting that the happen for months, but there is still no sign of softening in the labor market.

Second, if employment rises and the unemployment rate falls, consumer income will continue to climb which will provide the fuel for consumers to keep spending at a rapid pace in the fourth quarter.

Third, consider the housing market.  It is on fire. Existing home sales jumped 9.4% in September to a 6.5 million pace which is the fastest since 2006.  Furthermore, there was a 2.7 month supply of homes available for sale.  That is less than half of the 6.0 month supply that realtors believe is the point at which demand and supply are in balance.  If more homes were available for sale, existing home sales would exceed 7.0 million.  The average home remained on the market for 21 days in September – the shortest time from listing to sale ever.  Why is all this happening?  Clearly, a record low 2.9% mortgage rate is enticing to every potential buyer.  Furthermore, with the ability to work from home, sales in summer resort locations like Lake Tahoe, the mid-Atlantic beaches and the Jersey shore are booming.  Do we seriously believe that this extraordinary demand for housing is going to abate in the fourth quarter? 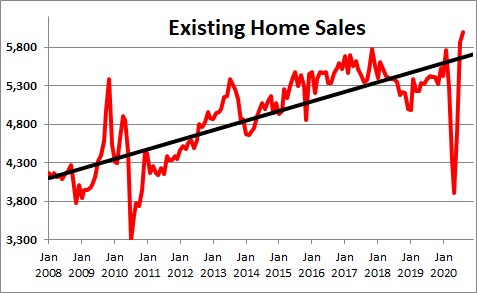 While common sense suggests that the labor market and GDP growth should soon slow, the most recent data suggest that the economy is far more robust than even the optimists expected.  American consumers and business people are proving, once again, to be remarkably resilient in the face of adversity.  The 1917-1918 pandemic was followed by the “Roaring Twenties” as cooped up Americans went on an extended spending spree.  Could it happen again  – a century later?