The Seeds of Inflation are Beginning to Sprout

The biggest surprise in recent years is that inflation has not begun to climb.  The labor market has been at full employment for a while, we have seen upward pressure on wages, but inflation has remained dormant.  It is important to understand why that has happened.  But that is history and, at long last, inflation is on the rise.  How much might inflation accelerate in the next year?  When might the Fed decide to reverse course and start raising short-term interest rates?  No one is talking about that possibility.

Serious upward pressure on the inflation rate will originate from the labor market.  Why?  Because labor costs represent about two-thirds of a firm’s overall cost.  If labor costs begin to climb firms will eventually be forced to raise prices to counter the negative impact on earnings.    That process begins once the economy reaches “full employment”.  At that level every qualified worker who wants a job already has one.  Fed officials peg that rate at about 4.2%.  The unemployment rate has been below that “full employment” threshold since October 2017 and. as a result, worker compensation has begun to climb. 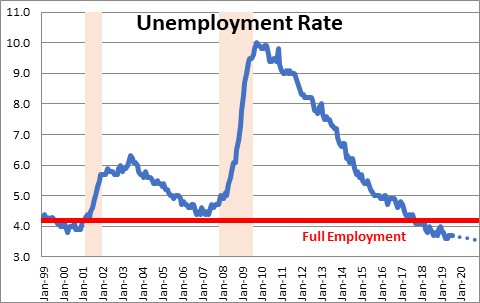 The indicator of wage pressures most people cite is average hourly earnings because it is readily available and can be observed monthly as part of the employment report.   That measure of wages begin to rise noticeably in mid-2015. 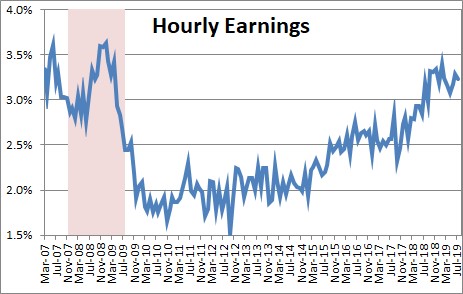 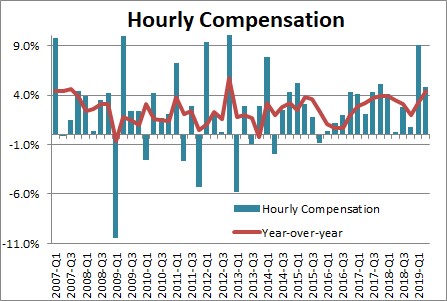 If firms pay workers 3.0% higher wages and the workers are 3.0% more productive, firms don’t care. They are getting 3.0% more output and, therefore, they have no incentive to raise prices.  But if they pay 3.0% higher wages and their workers are no more productive, then labor costs have clearly risen and they are likely to pass them through to their customers in the form of higher prices.

Focusing on any measure of hourly compensation is misguided.  People should be looking at the increase in labor costs adjusted for the change in productivity which is something that economists call unit labor costs.  This concept is the best gauge of upward pressure on the inflation rate caused by tightness in the labor market.

In the past year hourly compensation has risen 4.4%.  Productivity has risen 1.8%.  The difference between those two numbers is the increase in unit labor costs which has climbed 2.6%.  In mid-2016 ULC’s were climbing at an 0.8% pace which was far below the Fed’s 2.0% inflation target.  The alleged tightness in the labor market was not generating any upward pressure on the inflation rate.  Since then ULC’s have begun to accelerate and the current 2.6% pace is higher than the Fed’s 2.0% target.  For the first time, the well-documented labor shortage is putting upward pressure on inflation. 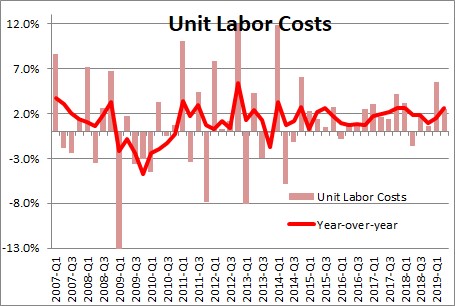 So what should we expect going forward?  Labor costs are unlikely to rise less than the 4.4% increase registered in recent quarters.   That is particularly true now since unions (as evidenced by the current UAW strike) and other workers are starting to exercise their power and demand higher wages.  If employers do not accede to those demands workers could easily jump ship to another employer who, facing a similar labor shortage, may be willing to better compensate them.  We will take a stab that hourly compensation next year climbs 4.6%.  Productivity growth is unlikely to keep pace.  Trump’s inconsistent trade policies and persistent badgering of Fed Chair Powell and his colleagues has undermined business confidence.  As a result, investment spending has slowed considerably in the past several quarters which suggests that productivity growth next year might not accelerate further (as we had expected earlier) but remain at about 1.7%.  A 4.6% increase in compensation combined with a 1.7% increase in productivity implies an increase in unit labor costs of 2.9% in 2020.   That is significantly higher than the 1.6% increase registered in the past 12 months and also significantly above the Fed’s 2.0% inflation target.  In fact, inflation could be almost as far above the Fed’s target by the end of next year as it was below target for the past several years. 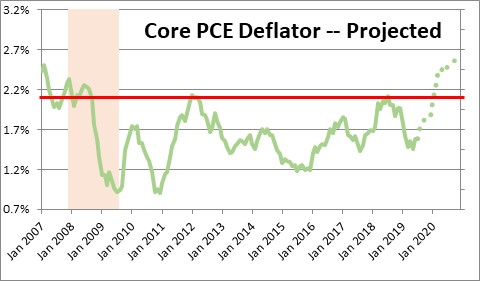 The Fed has said that it is willing to live with inflation above target for a while because it was below target for so long.  It seems to want inflation to average 2.0% for the entire business cycle.  If that is the case, a 2.6% increase in 2020 is unlikely to trigger a rate hike between now and the end of next year, but it certainly takes any further rate cuts off the table.  Beyond the November 2020 election the Fed might want to consider some rate hikes to ensure that the inflation rate does not climb too far above target.  A near-term increase in the inflation rate may be welcome.  But at some point, it could be viewed as a potential problem and become the catalyst for higher rates.  But relax, that time is still far into the future.