The Temporary Increase Is Becoming Permanent

The CPI rose sharply in May for the second consecutive month.  Large increases are often attributable to the volatile food and energy categories.  Not this time.  It is the run-up in the so-called core rate that is troublesome.  Much of the increase was in categories that are still rebounding from price declines that occurred during the recession — like airfares, and hotel room rates.  But these temporary factors should persist through the end of this year.  Prices for cars and trucks are skyrocketing because automobile manufacturers and others are unable to get the computer chips they need.   This, too, is temporary but the chip shortage is likely to persist into 2022.  Food and energy prices are climbing because of strong demand and should push higher.  Meanwhile, the all-important shelter component of the CPI is beginning to turn upwards.  This is a major development because shelter represents one-third of the entire CPI.  As we see it, temporary price increases are likely to last a lot longer than anybody expects, and now other factors are beginning to kick in.  The Fed’s temporary increase in inflation is looking more and more permanent.

In the past 12 months the CPI has risen 5.0%.  This compares to a 2.3% increase in 2019 – before the recession began to distort the data.  The 12-month increase in some categories reflects rebounds from prices that fell sharply during the recession.  Airfares, for example, have risen 24% in the past year but are still 12% below their February 2020 (pre-recession) level.  It will take until December for prices to return to their pre-recession level. 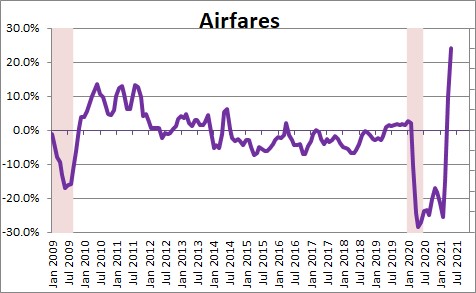 Room rates for hotels have climbed 10.0% in the past year.  Like airfares, they remain 6.0% below their pre-recession level and are unlikely to reach that level until the end of the year. 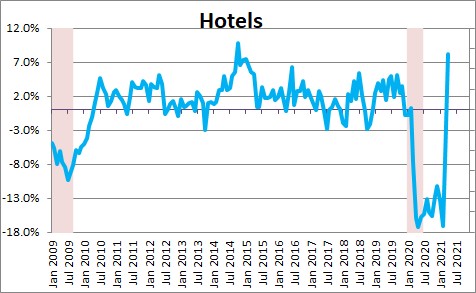 Automobile manufacturers cannot get the computer chips they require and new car production has slowed dramatically or, in some cases, actually ground to a halt.  Unable to find what they want consumers are turning to the used car market.  Used car and truck prices soared 9.5% in April and 7.3% in May.  During the past year used car prices have climbed 30%.  These price increases may be temporary, but respondents to the monthly purchasing managers’ surveys indicate that chip shortages are likely to persist through the spring of 2022.  At the same time car rental companies sold their fleets when air travel plunged last year.  As demand returns they, too, cannot get the new cars they need and, car rental prices have skyrocketed. 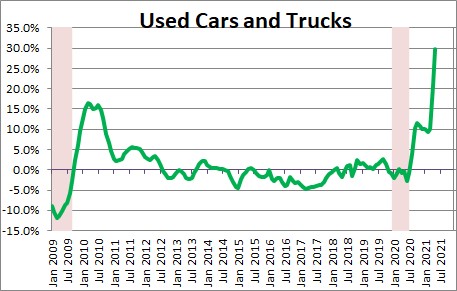 The point is that many so-called temporary increases in inflation are likely to persist for a protracted period of time.  Economists believe that these temporary factors will show signs of moderating by mid-summer.  Don’t bet on it. 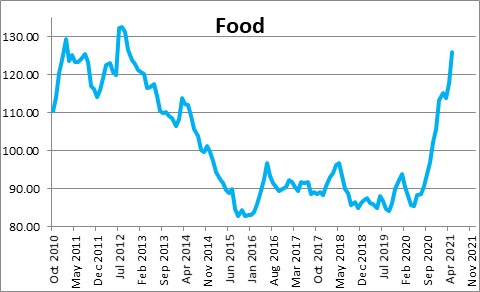 Grocery stores and restaurants are beginning to raise prices.   At the same time restaurants are being forced to pay higher wages and sign-on bonuses to attract the servers, dishwashers, and line cooks that they need.  The food component of the CPI has risen 2.2% in the past year, but in the past two months it has climbed at a steamier 4.8% pace.  Food prices are going to climb for a long time to come. 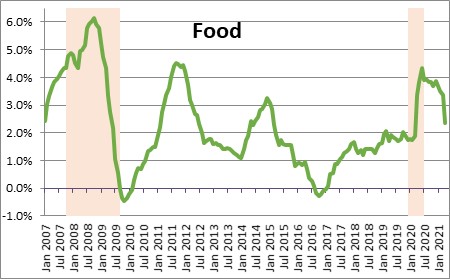 Energy prices are on the rise.  Crude oil prices have returned to $70 per barrel.  Gasoline prices exceed $3.00 per gallon.  Both prices are higher than their pre-recession levels and are being lifted by surging demand.  As the global economy continues to re-open it seems inevitable that these prices are headed higher. 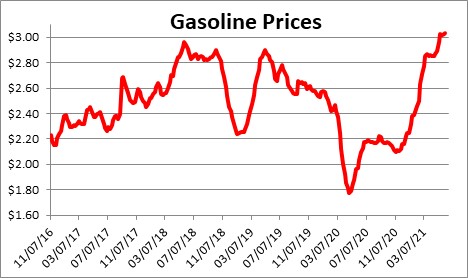 Then there is the shelter component of the CPI.  This category is critical because shelter accounts for one-third of the entire CPI.  Housing is in extremely short supply and, as a result, home prices have risen 13.2% in the past year.  The BLS considers housing to be an investment so it uses a rent measure instead.  If housing is in short supply and home prices are surging, it is just a matter of time before rents begin to climb.  Buyers who can no longer afford to purchase a house will be forced to rent.  The increased demand for rental housing will push up the rent component of the CPI.  In the past year, the shelter component has risen 2.2%.  But in the past three months the pace has quickened to 4.0%.  It could be that this all-important category is beginning to accelerate.  If so, the faster pace is likely to persist for at least another year because builders are facing supply constraints and cannot ramp up production fast enough to alleviate the shortage quickly. 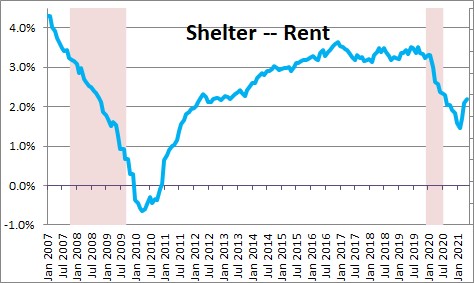 As we see it, the Fed expects some prices to rebound because prices fell so sharply during the recession.  But how long is temporary?  That process will be ongoing at least through yearend.

At the same time other components of the CPI are beginning to climb because demand far exceeds supply — like housing and gasoline.  If rents begin to climb it is a big deal because of its heavy weighting in the CPI. 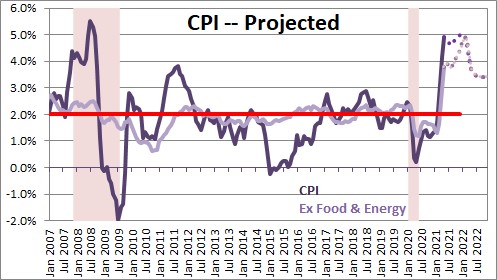 For now the Fed will welcome a faster rate of inflation.  It is not about to raise prices any time soon.  To even contemplate such a move the Fed needs to see the labor market at full employment.  That means it wants the unemployment rate to be 4.0%.  We are optimists and expect that to happen by the end of this year. 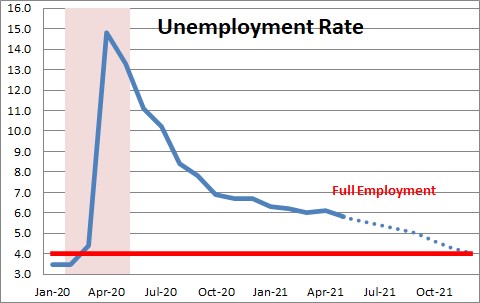 It has also said that it will wait until inflation expectations also begin to climb.  Thus far, the 10-year rate of inflation is expected to be 2.4%.  The bond market still believes the Fed’s story that the inflation bump will prove to be temporary.  But let’s see what happens to the implied inflation rate once the economy reaches full employment.  We continue to believe that the Fed will not raise rates until sometime in 2023, but the combination of the unemployment rate, actual inflation, and inflation expectations will determine the timing.  Stay tuned. 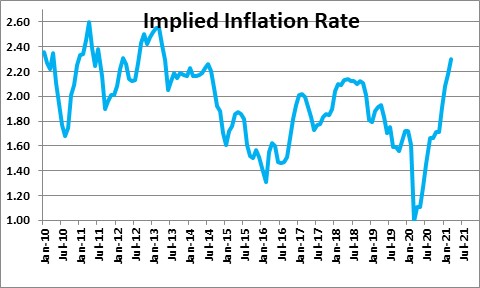