by sslifer | Dec 18, 2014 | Commentary for the Week, NumberNomics Notes, The Year Ahead Outlook | 0 comments

GDP growth in the U.S. is poised to accelerate to 3.3% in 2015 as rapid jobs expansion, rising wages, steady improvement in the housing market, and falling oil prices provide ample stimulus.  At the same time, as oil prices level off and wage pressures begin to mount the inflation rate is expected to edge upwards from 1.8% currently to 2.8% in 2015 which is slightly above the Fed’s 2.0% target.  A pickup in the pace of economic activity, the relentless tightening of the labor market, and an uptick in inflation will cause the Fed to raise interest rates for the first time in eight years.  But given that the expected series of rate hikes is starting from 0%, it will take several years for them to reach a level that will have any meaningful impact on the pace of economic activity.  Thus, it is difficult to envision how the U.S. economy can slip into a recession sooner than 2018.

However, as the economy adjusts to a rising rate environment and to a sea change in the oil market, there will be considerable volatility in every market — stocks, bonds, currencies, and commodities — which will make it a very bumpy ride.

Employment. Perhaps the most positive factor contributing to this ratcheting upwards in the pace of economic activity is employment.  Monthly job gains have climbed to 225 thousand which is as good as it gets.  Jobs create income which becomes the fuel for a pickup in the pace of consumer spending. 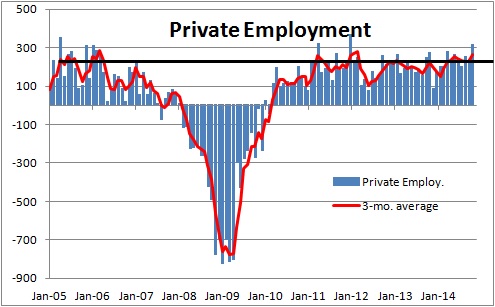 Rapid hiring gains have caused the official unemployment rate to decline far more quickly than anyone expected to 5.8% which is approaching the 5.5% level that is generally associated with “full employment”.  At that level everyone who wants a job presumably has one.  But Fed Chairman Yellen has focused attention on a broader measure of unemployment which includes people who are unemployed as well as workers who are “underemployed”.  There are two types of underemployed workers — “discouraged workers” who have been without a job for so long that they have given up seeking employment and workers who have part time jobs but would like full time employment.  This broader measure of employment is currently 11.5% compared to 5.8% for the benchmark rate.  It is important to note that this broad measure is always higher than the official rate simply because it is a different (and broader) measure of unemployment.  Over the past 20 years this broad rate has averaged about 80% higher than the official rate.  Thus, if full employment for the official rate is 5.5%, then full employment for the broader rate should be about 10%.  As the labor market steadily tightens in the months ahead and employers have increasing difficulty finding skilled workers, many “discouraged workers” may once again seek and find employment, and some part-time workers may be offered full-time positions.  Thus, both rates of unemployment should continue to drop and approach their full employment thresholds by the middle of next year. 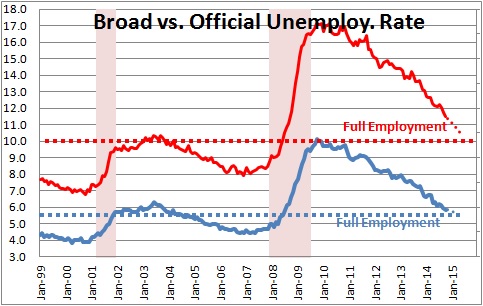 Housing. The all-important housing sector should continue to expand next year despite an expected modest increase in mortgage rates from 4.0% currently to about 4.75%.  This expected gain is the result of an on-going shortage of available housing.  Every year in the U.S. 1.3 million new households are formed.  Those people need some place to live.  It could be a single-family home or an apartment.  Builders have stepped up the pace of construction to about 1.0 million units but are encountering some difficulty finding skilled workers, challenges in attaining adequate financing, and a shortage of available lots.  Thus, housing will remain in short supply at least through the end of 2015. 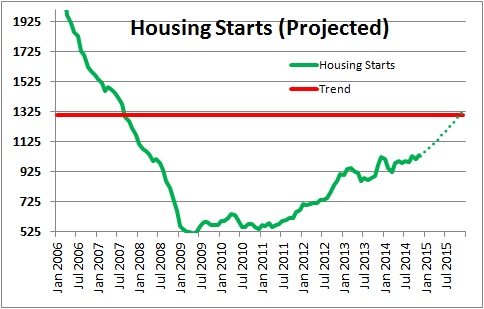 New home sales have been rising steadily but the rate of increase remains modest.  This seems to reflect a shift in preference away from owning a home towards renting which is especially prevalent amongst younger adults.  Some of this may be a generational change whereby young people do not want to be tied down by home ownership.  It may also reflect difficulty in qualifying for a mortgage given the steady increase in home prices the past couple of years and the fact that many younger borrowers are encumbered by a considerable amount of student debt.  Given this distinct preference for renting, there is an acute shortage of available rental properties.   So while housing starts will undoubtedly continue to climb, the growth rate for multi-family construction is likely to be twice as fast as for single-family housing (45% vs. 20%) in 2015. 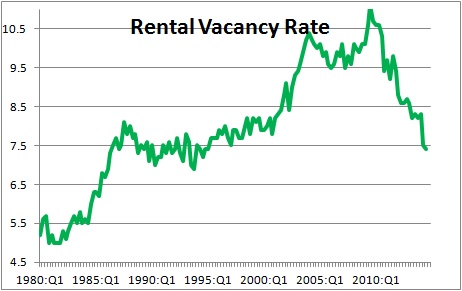 Oil. Rising oil prices have been a contributing factor to every major recession in the West since the mid-1970’s.  It is never the only factor causing these economic downturns, but it is invariably a contributing factor.  Similarly, our most impressive periods of sustained growth in the 1980’s and 1990’s were lubricated by falling oil prices.  Thus, it is logical to expect that the 50% drop in the price of crude oil since June will lead to a significant pickup in the pace of economic activity next year not just in the U.S. but around the globe – China, Japan, Germany, France, the U.K., Italy, and Canada. 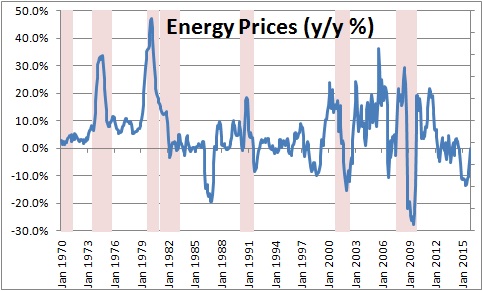 Consumers will be able to spend money saved at the pump on other items.  At the same time consumer confidence will rise sharply.  An obvious beneficiary will be the auto industry as a surge in jobs and more income from falling gas prices will encourage consumers to buy a new car.  The agricultural sector which is very energy intensive will get a lift. That translates into lower food prices.  Airlines will experience a significant drop in the cost of jet fuel which eventually will filter through into lower ticket prices.  Portions of the manufacturing sector that are heavy users of petroleum based products – think plastic and chemicals — will also get a boost.

Inflation. With the dramatic decline in oil prices it is tempting to anticipate a substantially lower inflation rate next year.  But that would be a mistake.  The Energy Information Administration (EIA) expects crude oil prices to average $63 a barrel in 2014 compared to $55 today.  Thus, oil prices are likely to have reached their low point.

But two other items are likely to boost the inflation rate from 1.8% currently to 2.8% next year.  First, the extreme shortage of available rental units has caused rents to rise steadily.  They are now climbing at a 3.0% rate.  This is an important factor in any inflation forecast because housing accounts for one third of the entire CPI. 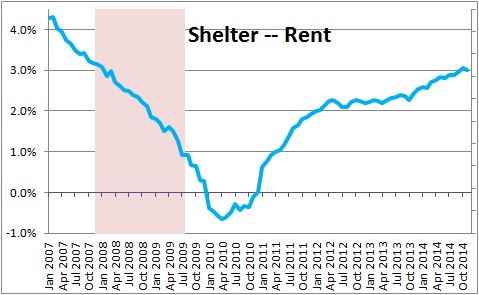 In addition, the steady tightening of the labor market should cause wages to rise more quickly in 2015.  If employers cannot find the skilled workers they need from the ranks of unemployed or underemployed workers, they will try to poach those employees from other firms by offering higher wages and/or more attractive benefits packages.  Given that wages represent two-thirds of a firm’s overall cost, higher wages are almost certain to be passed along to consumers in the form of higher prices. 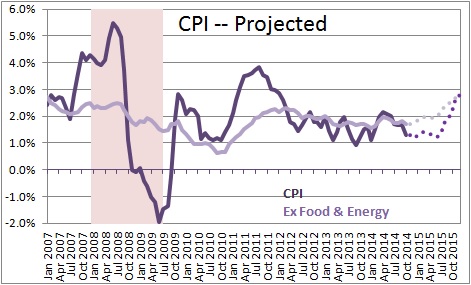 Federal Reserve. Like virtually everyone else we expect the Fed to begin raising short-term interest rates by about the middle of next year.  That is because the Fed has told us the two conditions that are required for it to initiate that process.  First, the Fed has said that it will not begin to raise rates until the unemployment rate reaches the full employment level.  As noted earlier, that should be achieved by the middle of next year.  The Fed has also said that it will not raise rates until the inflation rate has climbed to its 2.0% target rate.  That, too, should occur by midyear.  That is why virtually all economists expect the process of raising interest rates to begin at about that time.   Once underway, the Fed has promised that it will raise rates slowly.  As a result, we expect the funds rate to be at 1.2% by the end of next year.

But an increase in short rates from 0% to 1% will not do much to slow the pace of economic activity.  Indeed, rates will have to climb to about the 4% mark before they are likely to bite.  That level will not be achieved until the middle of 2017.  That is the level at which interest rates are generally regarded as having a “neutral” effect on the economy.  At levels below 4% the Fed is trying to stimulate economic activity.  At higher rates it is attempting to slow it down and short circuit an increase in inflation.  A gradual move from 0% to 1%, or 2%, or 3% does not reflect a tighter Fed policy stance.  Rather, those steady rate increases should be regarded as a progressively less accommodative posture. 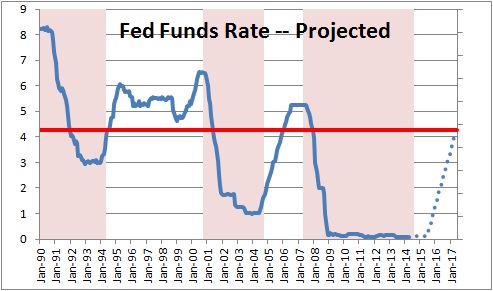 It is important to note that the U.S. economy has never slipped into recession until such time as the Fed has pushed short rates above that so-called neutral threshold.  In the chart below periods of recession are indicated by the shaded areas in pink.  The circles represent the level of the funds rate when the economy went over the edge into recession.  In every single instance the Fed has had to push interest rates above the neutral rate to induce a recession.  So if it takes until mid-2017 for rates to get back to neutral, it is difficult to envision how the U.S. economy can fall into recession until 2018 at the earliest.  We are not forecasting a recession in that particular year, but for the first time since the recession we will have to watch carefully at that point in time for indications that the rate hikes are beginning to take their toll. 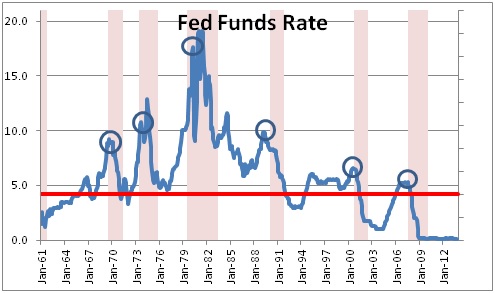 Thus, the overall economic environment for 2015 appears favorable with 3.3% GDP growth, a decline in the unemployment rate to 5.0% by yearend, and low oil prices that should average about $63 per barrel.  Interest rates will remain at historically low levels even with the moderate rate hikes that are anticipated.  The combination of robust economic activity, low oil prices, and still low interest rates should propel the stock market higher.

Volatility. While the overall economic outlook appears bright, it will be a year of transition on many fronts which implies considerable volatility in all markets – the stock market, bonds, commodities and currencies.

This is the first time that the Fed has raised short term interest rates in eight years.  We are going to be reminded of what that process feels like.  At the same time a potential increase in the inflation rate should impact bond yields.  All of this should lead to considerable volatility in the fixed income markets during the course of the year.

In the past six years all central banks have been acting in concert to push interest rates to record low levels.  But now the Fed and the Bank of England are poised to raise rates while the European Central Bank and the Bank of Japan seek additional stimulus and are inclined to further ease monetary policy.  This divergence in monetary policy amongst the world’s four largest central banks implies currency movements with the dollar and the pound sterling strengthening, while the Euro and the yen weaken.

The consequences of the unprecedented increase in the supply of oil and possible counter moves by OPEC countries should lead to wild fluctuations in the commodity markets.

As the GDP growth forecasts for the U.S., Europe, and Asia ebb and flow, and as interest rate expectations are revised accordingly, the stock market is virtually certain to have a wild year with 200-point daily changes occurring often.

At the end of next year it will be evident that 2015 was a very good year, but hang on to your hats as the year progresses.  It is going to be a wild ride.