by sslifer | Dec 18, 2015 | Commentary for the Week, NumberNomics Notes, The Year Ahead Outlook | 1 comment

The economy should continue to chug along with GDP growth of 2.6% or so in 2016. But growth is uneven. Some sectors like consumer spending and housing are expanding nicely, but growth in manufacturing and trade is being curtailed by the combination of a sharp decline in oil prices and a stronger dollar. While 2.6% GDP growth is unimpressive it is adequate to produce jobs of 150-200 thousand per month which, in turn, will allow the unemployment rate to slip to 4.5% by the end of next year. That level is below anyone’s estimate of full employment which means that firms will need to raise wages to attract the increasingly scarce number of qualified workers. That, in turn, means that firms may also begin to raise prices to offset the higher labor costs. If that is the case the days of near-zero percent inflation will soon disappear. In an environment in which inflation is beginning to climb the Fed will continue its long journey of gradually increasing short-term interest rates. By yearend 2016 the federal funds rate will have risen to 1.25% which — while still low — is higher than the 0% rate that existed for the previous seven years. What all of this seems to portend is a good, but less than spectacular, year both for the economy and the stock market with no hint of recession for the foreseeable future.

Anything related to the consumer is doing just fine. And why not? Driven by the powerful combination of steady gains in the stock market and rising home prices, consumer net worth has climbed to a record high level. Consumers have very little debt and can easily afford to borrow more if they so choose. Interest rates remain low even as the Fed begins the very slow process of lifting short-term interest rates. The economy continues to crank out nearly 200 thousand jobs a month which boosts consumer income. And the collapse in gasoline prices during the past year means consumers spend one-half as much to fill the car’s gas tank today than they did one year ago. That is a recipe for a relatively robust 3.0% pace of consumer spending in 2016.

Ditto for the housing sector. The future for the next several years remains bright in part because of all the factors cited above but, in addition, for the first time since the recession younger adults are leaving their parents’ homes and venturing forth on their own. They presumably now have jobs and are confident they will still have jobs a year from now. As they take a giant step forward and embrace their future they need a place to live. That could be a house or an apartment. There can be little doubt that this explosion of young adults all searching for a place to live is boosting both home sales and the demand for rental properties. In fact, both types of housing are in short supply. 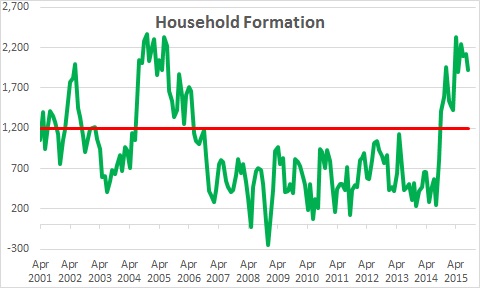 Builders are doing their best to step up the pace of production to satisfy this increased demand, but they are having a tough time finding an adequate supply of skilled workers to significantly boost the pace of construction. As a result, the housing sector will continue to expand and prices will move steadily higher in both 2016 and several years beyond. 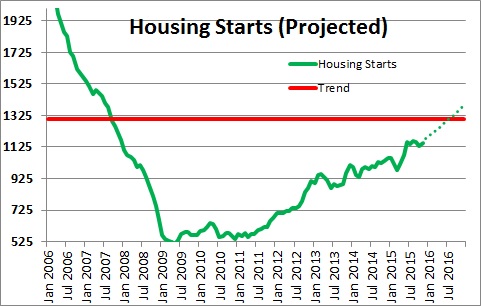 Unfortunately, the outlook for manufacturing and trade is not nearly as rosy. Both sectors are struggling.

With respect to manufacturing and the investment spending portion of GDP, the precipitous slide in oil prices in the past year from $107 to $36 currently has caused drillers to cap 60% of the wells that were in operation at this time last year. They have cut spending on drilling equipment and services and curtailed exploration and research spending. That has caused a considerable hit to the investment component of GDP. But given that the energy experts expect oil prices to rise to about $50 next year our best guess is that, the bulk of the negative impact on GDP growth has already occurred. In fact, we expect investment spending to rise 4.5% in 2016.

The trade sector was hit hard in 2015 by two factors. First is the direct reduction in demand caused by the sharp growth slowdown in China. China is in the process of converting from an industrial-based economy to a more consumer driven model. In the process GDP growth has slipped from a double-digit pace a few years ago to 6.8% this year. Given that China is the second largest economy in the world (behind only the United States), a growth slowdown of that magnitude is going to have repercussions everywhere. In the U.S. the impact is relatively small because exports to China are only about 7.5% of the total. But for many ASEAN countries like Indonesia, Thailand, Malaysia, the Philippines, Vietnam, and Singapore, as well as Russia, Taiwan, and South Korea, the impact of slower growth in China has been far more troublesome. 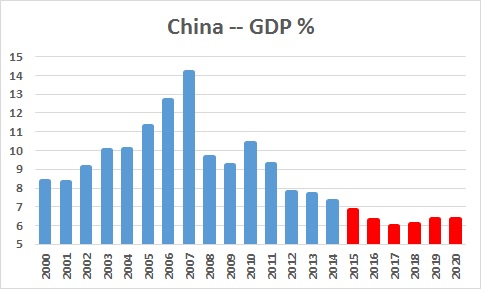 But keep in mind that GDP growth in China has already slowed from a double-digit pace to 6.8%. The IMF expects growth to settle in between 6.0-6.3%. In our opinion, most of the slowdown in the U.S. economy caused by slower growth in China occurred this past year.

Second, the higher value of the dollar has imposed further damage on the trade sector. The dollar has risen 15% in the past year. As the dollar rises, U.S. goods become more expensive for foreigners to purchase, hence slower growth in exports. In fact, exports will shrunk about 7% this year. 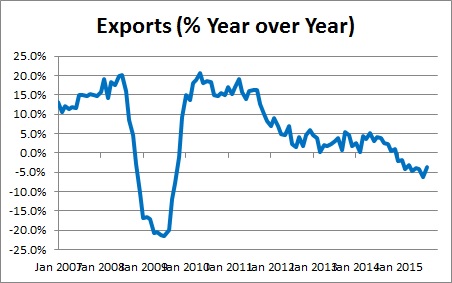 The increase in the dollar was caused in part by slow growth in China. During the summer the Shanghai Composite Index of Chinese stock prices plunged 40% and triggered a worldwide stock market selloff as investors feared GDP growth in China was on the brink of collapse. In times of turmoil investors seek the safety of dollar-denominated investments like U.S. stocks and bonds. That desire for dollar-denominated investments boosted the value of the dollar.

Going forward the dollar is likely to increase an additional 7% or so in 2016 for two reasons. First, 2.6% GDP growth in the U.S. outpaces growth elsewhere around the globe. That growth rate differential should tend to bolster the value of the dollar. Second, the Federal Reserve has begun to slowly raise short-term interest rates while central banks in Europe, Japan, and China are all moving in the opposite direction and trying to further stimulate the pace of economic activity. Thus, widening interest rate differentials should exacerbate the increase in the value of the dollar. 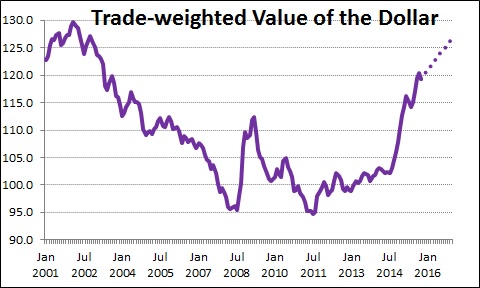 As we see it, consumer spending of about 3.0%, 4.5% growth in investment spending as oil prices rise slightly, and a modest drag on growth from the trade sector should result in moderate GDP growth for 2016 of 2.6%. While that outcome is truly unimpressive the benign overall result masks widely divergent movements amongst the various sectors. Consumer spending and housing are doing well. The manufacturing sector and trade have struggled throughout 2015, but the drag on GDP growth from each of those two sectors is expected to largely disappear in 2016.

GDP growth of 2.6% is rapid enough to generate almost 200 thousand new jobs every month for a while longer. Such an impressive pace of jobs creation will continue to push the unemployment rate lower. The official rate is currently 5.0% which is roughly in line with what most economists regard as “full employment”. At that level by definition everyone who wants a job has one. Even the broader measure that Fed Chair Yellen prefers will be at full employment by midyear. 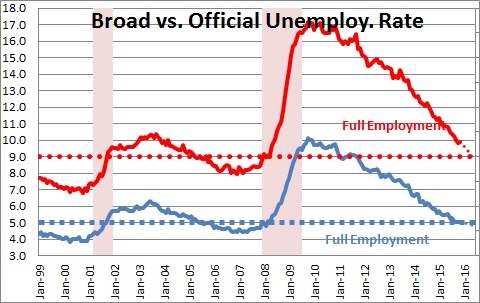 “Full employment” is an important concept because it means that employers will have an increasingly difficult time finding an adequate number of new workers. As a result, they will have to entice people to change jobs by offering higher wages and/or more attractive benefits. That, in turn, means that the firm’s cost of labor will increase. And given that labor costs are such an important part of a firm’s total spending, there is a good likelihood that businesses will raise prices to offset the impact of higher labor costs. Thus, the days of 0% inflation will soon end.

Our sense is that if oil prices level off inflation will soon rise from 0% currently to 2.6% or so by the end of next year. Given that the Fed has a 2.0% inflation objective a 2.6% pace is not bad, but inflation will have shifted from a pace that is far below target to a position that is slightly above it. That should be sufficient to keep the Fed in motion. 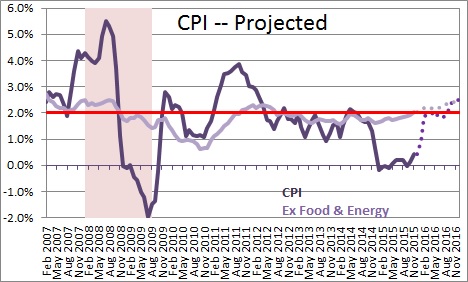 The Fed finally ended the era of 0% interest rates on December 16. Rates had been at that level since December 2008. They have promised to raise rates slowly which is generally interpreted to mean that they will increase them only at every other FOMC meeting. Given that these meetings occur every six weeks that pace will cause rates to rise by about 1.0% per year which is far slower than the 2.0% pace that it has raised rates in the past.
How far do rates need to climb? Our sense is that a 3.5% federal funds rate should be roughly “neutral”. At that level the Fed is neither trying to stimulate the economy nor attempting to curtail the pace of economic activity. Economists reach that conclusion by looking at the level of the funds rate relative to the rate of inflation over a long period of time. During the past 50 years – in good times and bad – the funds rate has averaged about 1.5% higher than the rate of inflation. Hence, if the Fed wants its policy to be “neutral” it should probably put the funds rate 1.5% higher than the inflation rate. Given that it seeks a 2.0% rate of inflation, add the two together and one can conclude that a “neutral” funds rate should be about 3.5%. If the Fed tightens at the pace they have suggested, it will take until the end of 2018 for the funds rate to return to neutral. 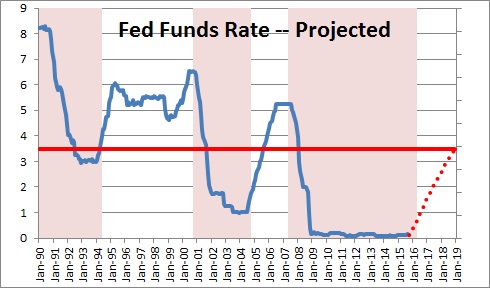 The final piece that is important is that the U.S. economy has never gone into recession until the Fed has pushed the funds rate above that so-called “neutral” rate. So if it takes until the end of 2018 for the funds rate to return to neutral, it is hard to imagine how the U.S. economy can dip into recession until 2019 at the earliest. Make no mistake we are not forecasting a recession in 2019. We are merely highlighting the fact that by that time short-term interest rates will have finally risen enough that they could begin to bite. For the first time in a decade we will have to pay close attention to the economic data for early warning signals that the economy may be starting to stumble. 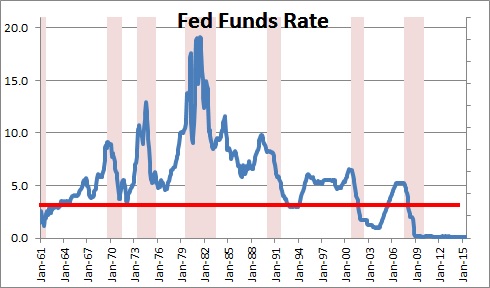 One final point. If this expansion lasts until June 2019 – which we think will happen – this will become the longest expansion on record. It will have surpassed the expansion of the 1990’s which lasted exactly 10 years. While everybody criticizes the Fed for being too tight or too easy, if it can produce a business expansion that lasts a decade we would suggest that it is doing a pretty good job. It is time to give praise where praise is due.