by sslifer | Dec 16, 2016 | Commentary for the Week, NumberNomics Notes, The Year Ahead Outlook | 2 comments

Policy changes enacted by President Trump and Congress in the first half of 2017 should:

The catalyst will be policy changes enacted in the first half of next year.

Political gridlock in Washington has so frustrated business leaders that they currently lack the will to invest.  Nonresidential investment spending has slipped from 8% growth a few years ago to 0%.  The 35% corporate tax rate encourages business leaders to move their corporate headquarters overseas to take advantage of corporate tax rates that average 23% elsewhere.  They are unwilling to bring overseas earnings back to the U.S. because it will be taxed twice – once in the country in which they do business and again in the U.S. if they bring those earnings home.  Large firms hire an army of attorneys to ensure they are in compliance with all 80,000 pages of Federal regulations.  And they are befuddled by a dysfunctional, expensive health care system which they are required by law to provide if they have more than 50 workers. 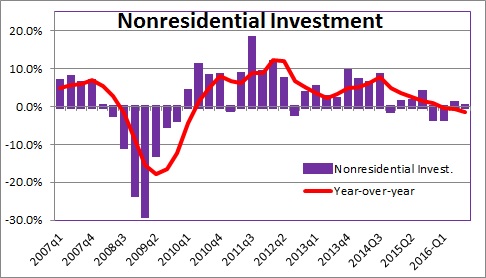 Because investment spending stimulates productivity the more money firms spend on the latest technology or the newest labor-saving device for the factory floor, the more efficient its workers are and the faster productivity grows.  The lack of investment has caused productivity growth to virtually disappear.  And slower growth in productivity is a major reason why the economic speed limit has slipped from 3.5% in the 1990’s to 1.8% today. 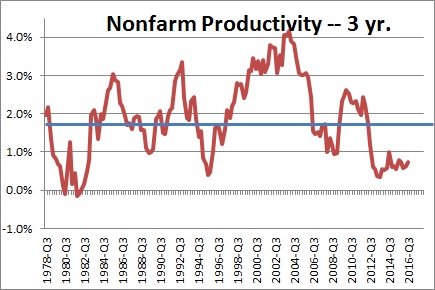 But the U.S. is under new management!

With a Republican President and Republican control of both the House and the Senate, much of Donald Trump’s agenda is likely to be enacted by midyear.  Specifically, we look for:

If business leaders were discouraged by gridlock, action on any or all of the above should inspire confidence.  Our expectation is that this combination of policy changes will unleash a wave of investment spending over the next several years and boost its growth rate to 5%.  If firms re-ignite investment spending it is an almost sure bet that productivity will follow.

Productivity growth has fallen from a 2.0% pace in the 1990’s to about 1.0% and economists do not understand why.  Some suggest that it reflects the retiring baby boomers.  When a firm replaces someone who has been on the job 40 years and is very efficient with someone with less experience, it is likely that productivity growth will slow.  Perhaps there are measurement issues.  It is difficult to measure output and productivity in the service sector.  If it were measured more accurately productivity might grow more rapidly.  Or, perhaps, productivity got a onetime boost in the late 1990’s and early 2000’s by the introduction of the internet followed by the cloud and aps.  The bottom line is nobody knows.

But what if the policy changes described above unleash a wave of investment spending and productivity growth accelerates to 2.0%?  Labor force growth of 0.8% plus productivity growth of 2.0% means that the economy’s speed limit will jump from 1.8% to 2.8%.  That brings with it a dizzying array of positive economic developments. 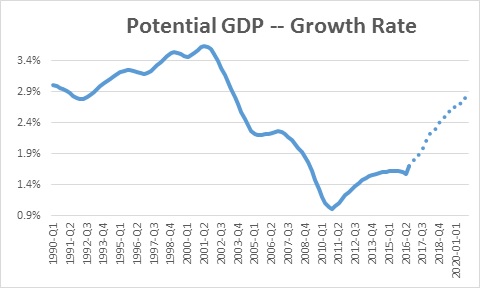 First, growth in our standard of living will accelerate by the 1.0% difference in those two growth rates.

Second, wages will grow more quickly.  If productivity accelerates a firm can afford to pay its employees higher wages.  If workers are 3% more productive the firm gets 3% more output.  Thus, workers have earned a 3% bigger paycheck.  In the past year worker compensation has risen 3.0%.  Next year, given the very tight labor market, we expect compensation to climb by 4.0%.

Third, faster growth in productivity helps to keep the inflation rate in check.  If firms pay workers 3% higher wages but they are no more productive, businesses owners will be inclined to raise prices to offset the higher labor costs.  The inflation rate will rise.  But what if firms pay their workers 3% higher wages because they are 3% more productive?  In this case there is no reason for that firm to raise prices and there will be no upward pressure on inflation.  Thus, to determine the upward pressure on inflation stemming from a tight labor market do not look solely at the faster growth in wages.  Instead, look at the growth rate of wages adjusted for the increase in productivity.  Economists call this “unit labor costs”.

In the past four quarters compensation has risen 3.0%.  Productivity has been unchanged.  Hence, unit labor costs have risen 3.0%.  In 2017 we expect worker compensation to increase 4.0%.  We also expect productivity to climb by 1.0%.  Thus, unit labor costs next year should once again increase 3.0%.  There will be no more upward bias to the inflation rate in 2017 caused a tight labor market than there was this year.  The faster growth of wages should be offset by a commensurate increase in productivity.

Finally, if the inflation rate holds fairly steady the Fed is likely to adhere to the modest path of increases in interest rates that it has described previously.

Specifically in the next two years we expect the following:

The GDP growth rate assumes 2.5% growth in consumer spending in each of the next two years.  The consumer is highly optimistic with confidence the highest in 13 years.  The stock market is at a record high level.  Consumer debt in relation to income is the lowest since the mid-1980’. The economy is generating 170 thousand jobs per month which produces the income necessary for consumers to maintain their pace of spending.  Interest rates may climb moderately but remain low by any historical standard.  And the price of gasoline is expected to remain low at about $2.25 per gallon.  Consumer spending should remain solid for the foreseeable future.

The housing outlook remains bright in large part because there is a shortage of single-family homes available for sale and an acute shortage of rental properties.  Housing remains affordable despite the modest pickup in the 30-year mortgage rate to 4.0% primarily because consumer income is also climbing. Builders are trying hard to boost the pace of production, but are having difficulty finding an adequate supply of skilled labor.  Thus, it appears that the demand for housing will continue to outstrip supply for at least another year.

Policy changes implemented in the first half of this year should sharply boost the pace of investment spending during the next couple of years.  Investment spending should also climb as oil production rebounds in response to the higher price of oil.  This sector was crushed in 2015 and the first half of this year as oil prices collapsed.  But higher oil prices in recent months have caused a moderate pickup in the pace of production.  Finally, corporate profits are rebounding after having been depressed by the oil sector for more than one year.  We expect corporate earnings to climb 10% in 2017.

Trump’s comments regarding trade are disturbing.  A wall between the U.S. and Mexico, high tariffs on goods imported from China, a tax on any U.S. company that chooses to re-locate overseas, and renegotiating NAFTA are all counterproductive.  Such insular policies would significantly hurt those who elected him.  Prices at Walmart, Target, and COSTCO could all jump by 15%.

When he talks about trade he invariably notes the jobs lost to Mexico and China as U.S. firms take advantage of lower wage rates.  However, the majority of those jobs were not lost because of trade agreements but as the result of technological innovation and are never coming back.  To the extent that factory jobs are heading overseas we would suggest that there is a better way to stem the tide — create a more business friendly economic environment in the United States.   Cut the corporate income tax rate.  Allow firms to repatriate their overseas earnings to the U.S. at a favorable tax rate.  Provide regulatory relief.  By doing these things firms will choose to stay in the U.S. and jobs will remain here.

In 2014 and 2015 the dollar rose more than 20% given the slowdown in the pace of economic activity in China.  Global investors sought the safety of and higher returns available in the U.S. stock and bond markets.  Slower grow in exports caused the trade component of GDP to subtract about 0.5% from GDP growth in 2014 and 2015.  Given faster U.S. GDP growth and higher interest rates in 2017 and 2018 we expect the dollar to appreciate another 5%, but that pales in comparison to the earlier run-up.  As a result the trade component should subtract 0.1% or so from GDP growth in each of the next two years. 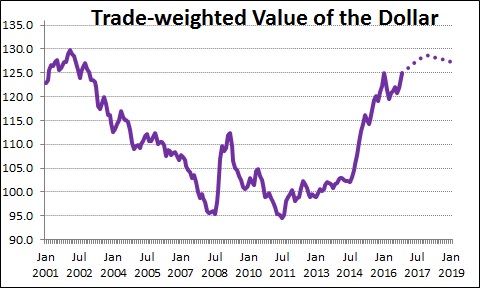 If GDP growth gathers steam it will create a large number of new jobs which means that the unemployment rate will continue to fall – slowly.  Specifically, we expect it to decline from 4.6% today to 4.4% by the end of 2018.

As the unemployment rate dips farther below the full employment threshold of 5.0% it will be increasingly difficult for firms to find the skilled workers they require.  They will raise wages and offer more attractive benefits to attract the employees that they need.  Thus, we expect wage pressures to accelerate.  Specifically, look for worker compensation to increase from 3.0% this year to 4.0% in 2017.

As wages and worker compensation rise more quickly, one might expect the inflation rate to rise more quickly.  But we also expect a commensurate increase in productivity.  Hence, unit labor costs should increase 3.0% in 2017 which is exactly the same as in 2016.  There should be no upward pressure on the inflation rate caused by increasing tightness in the labor market.

There will, however, be upward pressure on the inflation rate from non-labor market sources.  Specifically, the extreme shortage of available housing will cause home prices and rents to rise more quickly.  That is important because shelter represents one-third of the entire CPI.  Rising health care premiums will boost the cost of medical care.

On balance, we expect the core CPI (excluding the volatile food and energy components) to increase 2.7% in both 2017 and 2018 versus 2.3% this year.  That represents a “moderate” pickup in the rate of inflation.

If GDP growth accelerates and wages rise more quickly, the Fed will not be concerned if the inflation rate accelerates moderately and should not deviate from its previously-described path of gradual increases in interest rates.  Specifically, we expect two rate hikes next year which will boost the funds rate to 1.0%, and three rate hikes in 2018 which will lift the funds rate to a still low level of 1.8%.  We believe that short-term interest rates are “neutral”, and the Fed is neither stimulating the economy nor trying to slow it down, when the funds rate is about 3.0%.  It will not reach that level until mid-2020. 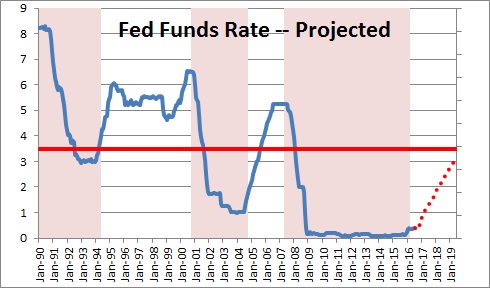 When will the current expansion end?  Not until 2020 at the earliest.  The U.S. economy has never fallen into recession until the Fed has boosted the funds rate above its neutral level.  If that does not occur until mid-2020, that would be the earliest date for a possible recession.

If the expansion continues until mid-2020 it would go into the history books as the longest expansion on record.  The current record is the decade of the 1990‘s which lasted exactly 10 years.  By mid-2020 this expansion will have reached its eleventh birthday.  If the Fed can produce an expansion that lasts a record-breaking 11 years it is doing an excellent job.

In conclusion, we believe that regulatory changes likely to be implemented in the first half of next year will trigger an avalanche of investment spending which will:

It does not get much better than that.