by sslifer | Dec 14, 2018 | Commentary for the Week, NumberNomics Notes, The Year Ahead Outlook | 0 comments

Stock market jitters are making investors nervous.  We understand why.  The expansion is approaching its 10-year anniversary which makes it geriatric.  GDP growth overseas has slowed.   Home sales have been shrinking steadily for a year.  However, we believe the stock market’s fears are overblown.

To forecast GDP growth, we break it down into its major components – consumer spending, investment, trade, and government spending.

Consumer spending, which is about two-thirds of the GDP, is likely to grow 2.6% in 2019.   While the stock market has fluctuated wildly for two months consumer confidence has been unfazed.  Why? 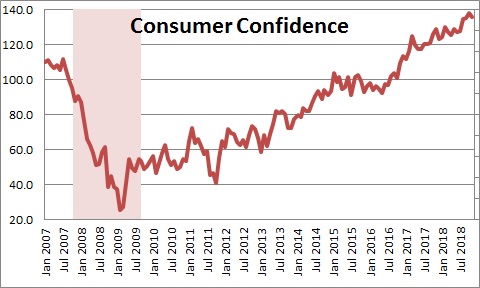 Jobs.  The economy continues to crank out 190 thousand new jobs per month.  Job creation generates the income that allows us to spend.

Some economists note that consumer debt has climbed to a record high level. 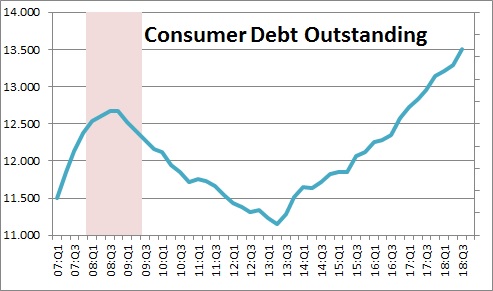 But consumer income has also risen and, as a result, debt in relation to income is near a record low level.  Consumers are not saddled with excessive debt. 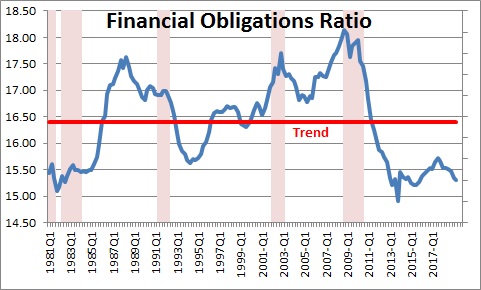 If we were, delinquency rates should have begun to climb.  That has not happened. 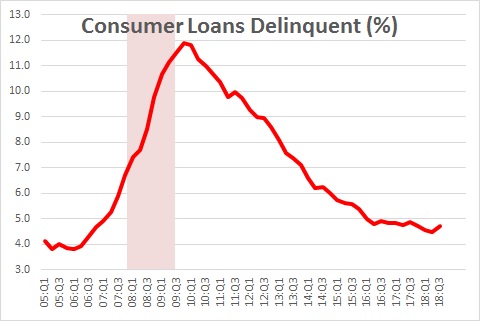 Bottom line – look for consumer spending to grow 2.6% in 2019.  Remember, consumers account for two-thirds of  GDP. 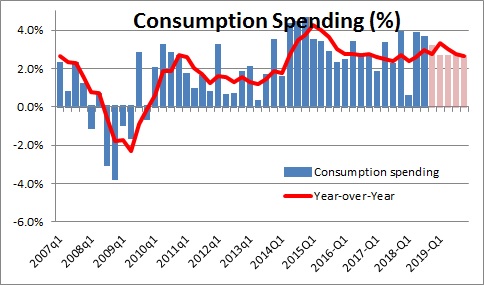 The  housing market has declined steadily throughout year.  While disquieting, we had a similar drop in 2014.  Ex Fed Chair Bernanke said that the Fed planned to slow its purchases of its U.S. Treasury bonds.  The markets panicked.  Long-term interest rates spiked and home sales got crushed.  But eventually reality sank in and sales rebounded.  We expected something like that to happen again.

Is the recent decline attributable to a drop-off in demand?  Or is it a supply constraint?  We argue it is primarily the latter. 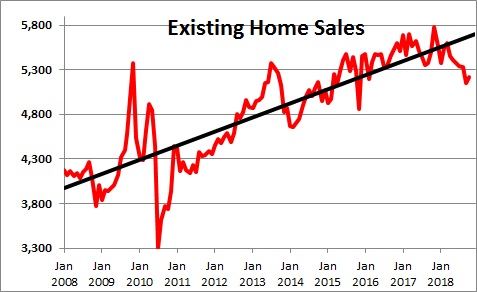 The National Association of Realtors )NAR) reports that there is currently a 4.3-month supply of homes available for sale and that a 6.0-month supply is necessary for supply and demand to be in balance.  Hence, there is a considerable shortage of homes available for sale.  Realtors cannot sell what is not for sale.  If enough homeowners were to put their houses on the market so that there was 6.0-month supply, sales would be 5.8-6.0 million versus 5.2 million currently. Thus, the problem is largely a supply constraint. 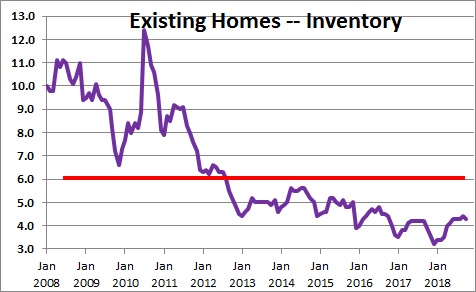 Some economists contend that the combo of rising home prices and higher mortgage rates has made housing unaffordable.  That is not true for most potential home buyers.  The NAR publishes a housing affordability index which includes prices, mortgage rates, and consumer income which has been rising steadily.  This index tells us that consumers have 45% more income than is necessary to purchase a median-priced home.  In 2007 that same number was 14%.  Housing was expensive at that time.  That is not the case today. 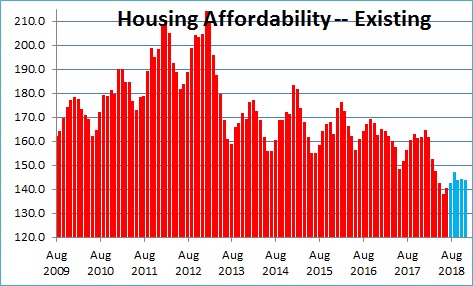 On the demand side, the average length of time between listing a home and its sale is 33 days.  In 2011 the comparable figure was 95-100 days.  Clearly the demand for housing remains robust. 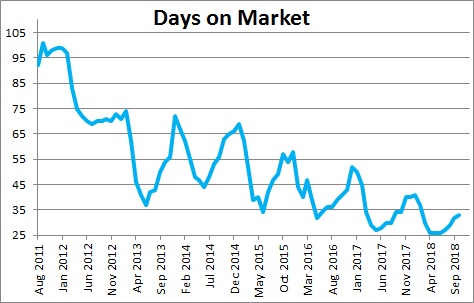 For builders the primary constraint seems to be a labor shortage.  They cannot find an adequate supply of workers.  That puts a lid on how many homes than can produce.  Our sense is that housing will climb about 4.0% next year, but that is not fast enough to alleviate the extensive housing shortage.

Investment spending is another 15% of the GDP pie.  Business confidence is soaring.  That is true for manufacturers, non-manufacturing firms, small businesses, and big businesses.  Small business confidence is particularly noteworthy since it has reached a 35-year high.  Why?  The tax cuts.  All measures of confidence surged immediately after the November 2016 election.  The combination of tax cuts, repatriation of overseas earnings at a favorable tax rate, and the elimination of unnecessary, overlapping, and confusing regulations has buoyed business optimism. 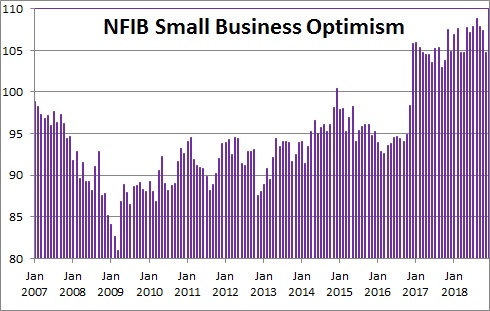 That confidence has, in turn, stimulated investment spending which surged in the first quarter of 2017 and continues to this day. While some economists suggest this is a short-term development triggered by the tax cuts, we do not share that view.  A reduced tax rate and further deregulation will spur investment spending for years to come.  Also, the 3.7% unemployment rate is the lowest in 50 years.  Labor shortages are extensive.  If firms cannot hire an adequate number of new workers, they might contemplate spending money on technology to make the company’s existing workers more productive.  This will provide further stimulus for investment.  Thus, we expect investment spending to grow 6.5% for the next several years. 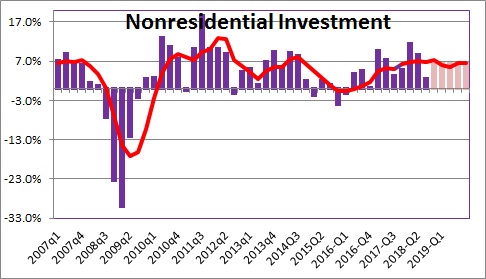 Trade has gotten lots of attention recently.  All economists support the notion of free trade.  All countries benefit.  But free trade is not fair trade.  Not all countries play by the rules.  Some cheat.  The primary culprit is China which does not respect intellectual property rights, steals trade secrets, and forces companies who want to do business in China to share their technology.  The object of the trade negotiations is to encourage China to reform.

But Trump initially said he was concerned about the size of the trade deficit and wanted to shrink it.   To that end, he imposed steel and aluminum tariffs on our neighbors, friends, and allies as well as China.  They retaliated.  Suddenly a trade war was underway.

While all countries lose as the result of a trade war, not all countries lose equally.  As investors scoured the globe to find which countries might fare best in a trade war, their answer was the U.S.  After all, trade only represents about 10% of the U.S. economy, versus about 50% elsewhere.  As a result, money has poured into the U.S. stock and bond markets since January.  The dollar has climbed 9%.  Tariffs imposed by other countries will reduce growth of U.S. exports, but the flood of money into the U.S. by foreign firms  who start new businesses here and hire American workers will limit the damage. 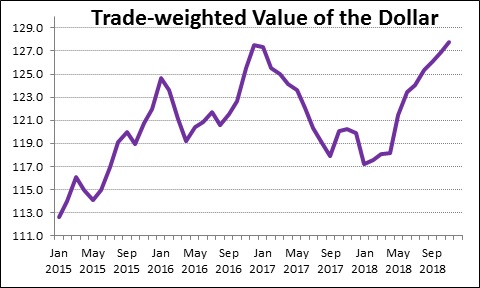 That is not the case for emerging economies.  They generally import the raw materials required by their manufacturing sector.  But those commodities are all traded in dollars.  When the dollar rises, their cost of goods sold increases.  It becomes more difficult for them to compete in the global marketplace.  As a result, their currencies decline.  Their stock markets plunge.  Indeed, the emerging markets stock index has fallen 23% since February.  Slower GDP growth lies ahead.  In October the IMF lowered its projection of 2019 GDP growth for emerging economies by 0.3%.  Growth in China should slip to 6.5% this year, the slowest rate of expansion since 1990 with even slower growth expected in the years ahead.  This slower pace of growth outside U.S. borders – China in particular – is one factor weighing on the U.S. stock market. 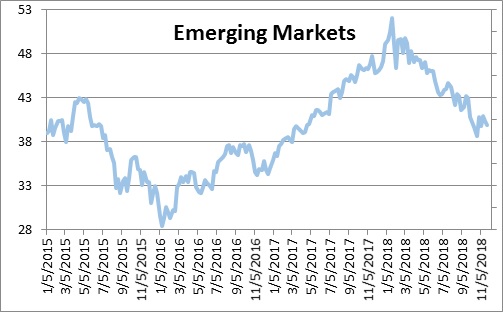 As growth  prospects dim for these countries and the pain intensifies, there is increasing pressure on their leaders to strike a trade deal with the U.S.  Thus far that has happened with Mexico and Canada.  A deal with Europe seems close.  China not so much.  But if Trump broadens and further raises tariffs on Chinese goods at the end of this year the pressure on both sides will intensify.  We believe that by spring the U.S. and China will reach an agreement with both sides claiming victory.

Unfortunately, previously imposed tariffs on U.S. goods by China and other countries will reduce growth in U.S. exports, cause the trade gap to widen, and the trade component will subtract about 0.2% from U.S. GDP growth in 2019.

When we combine these GDP components, we come up with projected GDP growth for 2019 of 2.8%.

Our GDP forecast for the next several years differs from others because we expect rapid investment spending to continue for years, which will boost productivity growth and, eventually, raise our economic speed limit to 2.8%.  Most other economists expect investment growth to fade soon and potential growth to remain at 1.8%.

Nobody knows exactly what the economy’s potential growth rate is, but we estimate it by adding the growth rate of the labor force to growth in productivity.  If we know how many people are working and how efficient they are, we should be able to estimate how many goods and services they can produce.  In the 1990’s potential growth was believed to be 3.5%, consisting of 1.5% growth in the labor force and 2.0% growth in productivity.  The economy grew at that rate for a decade and we concluded that in the good times the economy should grow by at least 3.0%.  But in recent years potential growth rate has slipped to 1.8%.  The baby boomers are retiring, and labor force growth has slipped to 0.8%.  Productivity growth has  faded to 1.0% following a growth spurt triggered by the introduction of the internet in the mid-1990’s and the cloud and apps in the early 2000’s.

While GDP growth of 1.8% is disappointing, it does not have to remain there forever.  But to increase it we need to boost either growth in the labor force or growth in productivity.  Labor force growth is unlikely to accelerate because the baby boomers will continue to retire for another decade.  Fortunately, productivity growth is determined to a large extent by growth in investment.  Our bet is that sustained rapid growth in investment will boost productivity growth from 1.0% in recent years to 2.0%, and the economy’s potential growth rate will climb from 1.8% to 2.8%.  That means that the economy can grow at a steady 2.8% pace without triggering an upswing in inflation. 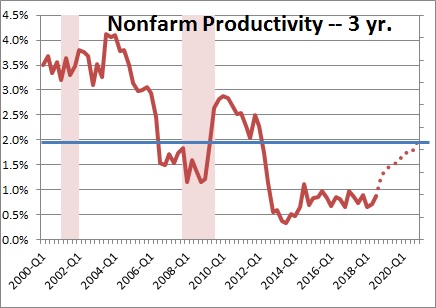 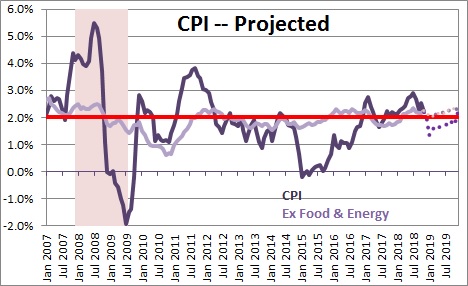 There are components, like housing, that will put upward pressure on the inflation rate.  Rents, which represent about one-third of the entire CPI index are growing by 3.3% which reflects the shortage of rental units.

But there are two factors that have kept inflation in check which are not widely discussed.

First, is the role of technology.  Whenever we buy anything, we shop first on Amazon and can find the lowest price anywhere in the world.  As a result, goods-producing firms in the U.S. have absolutely no pricing power.  In the past year prices of goods have risen  0.2%.  Prices of services have risen 2.9%.  This means that inflation is virtually non-existent for one-third of the economy. 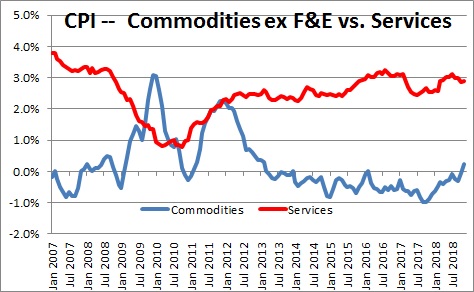 Second, productivity growth is countering most of the faster growth in wages.  Given the tight labor market wage growth has accelerated from 2.0% to 3.0%.  Most economists worry that this will cause an upswing in inflation.  But they are looking at the wrong thing.  If employers pay their workers 3.0% higher wages because they are 3.0% more productive, they don’t care.  They are getting 3.0% more output and have no incentive to raise prices.  Workers have earned their fatter paychecks.  Thus, we are supposed to look at “unit labor costs” which are labor costs adjusted for the increase in productivity.  In the past year unit labor costs have risen 0.9%.  The Fed has a 2.0% inflation target.  As a result, the seemingly tight labor market is not putting upward pressure on the inflation rate.  If productivity continues to climb, it will help to keep the inflation rate in check. 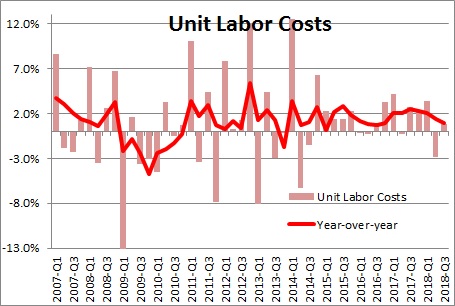 If in 2019 we end up with 2.8% GDP growth and inflation is relatively steady at 2.3%, the Fed will be cautious about further rate hikes.  For years the Fed thought that a “neutral” funds rate was about 3.0%.  But recent speeches by Fed governors make it clear that the Fed is rethinking that objective and may lower it to 2.75%.  Given that the funds rate currently is 2.2%, that implies only two rate hikes in 2019.  The Fed is getting close to where it wants to be. 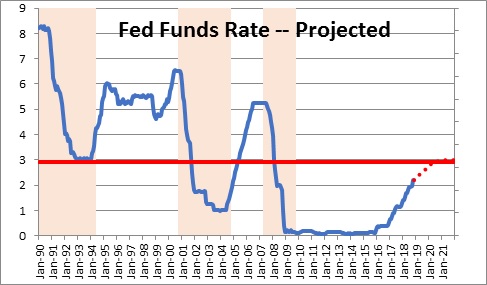 When will the expansion end?  We do not know, but probably not before 2022.  We want to see two things to happen before we call for a recession.

We have found that the U.S. economy has never gone into recession until the funds rate has been above the 5.0% mark.  If the Fed raises the funds rate to 2.75% by the end of next year and leaves it there, a 5.0% funds rate will not happen for the foreseeable future. 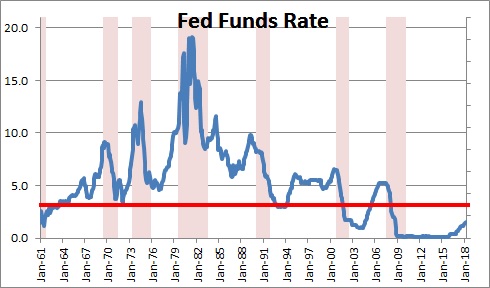 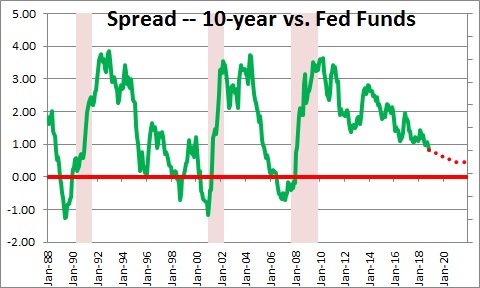 We have described a very positive scenario.  Potential GDP growth rises from 1.8% to 2.8%.  Inflation remains steady at 2.3%.  The Fed raises rates only twice more and the funds rate peaks at 2.75%.  The stock market will climb to a record high level during 2019.  But for this to happen, investment spending must continue to grow rapidly, and productivity must sustain a 2.0% pace.