by sslifer | Dec 23, 2022 | Commentary for the Week, NumberNomics Notes, The Year Ahead Outlook | 0 comments

A recession is coming sometime in 2023 or 2024.  We do not expect it to arrive until the first half of 2024.  Why so late?  Several reasons.  First, the real funds rate is likely to remain negative until the middle of 2023 which means it will have little bite and not slow the economy much until that time.  Second, the economy is still producing more than 200 thousand jobs per month which is keeping the unemployment rate near a 50-year low.  Third, despite a precipitous decline in sentiment, consumer spending continues to climb at a moderate rate.  Fourth, the housing market has taken the brunt of the Fed’s tightening but with home prices now declining the housing market should soon stabilize and sales should begin to climb somewhat in 2023.  Fifth, with rents rising at a 7.0% pace, wages climbing rapidly as workers try to counter falling real earnings, and oil prices likely to climb somewhat as the drawdown of oil from the Strategic Petroleum Reserve comes to a halt, inflation will only slow gradually in 2023.  To encourage slower growth the Fed will raise the funds rate from 4.4% currently to 6.0% by the middle of the year.  That will (finally) raise the real funds rate into positive territory and produce enough of a drag on growth to trigger a mild recession in the first half of 2024.  Once the recession arrives and inflation begins a rapid descent, the Fed will allow the funds rate to decline quickly in the spring of that year. 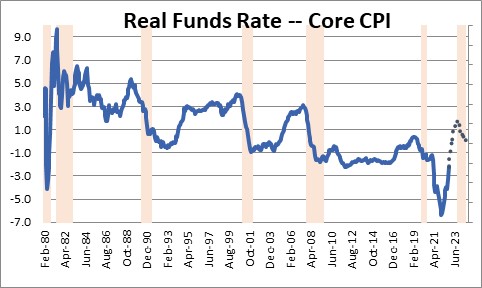 Jobs growth.  Given the extent of Fed tightening in 2022 one might have thought that jobs would be declining.  Not even close.  In the most recent 3-month period the economy has generated 270 thousand jobs per month.  Earlier this year the economy was producing 600 thousand jobs per month so jobs growth has slowed from on fire to merely hot.   Firms are still struggling to find enough bodies to fill open positions. 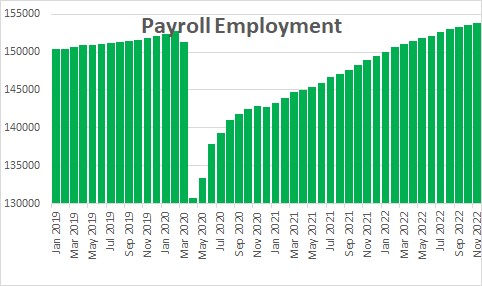 Because the labor force has been growing more slowly than jobs, the unemployment rate has fallen 0.2% in 2022 to 3.7%.  The Fed believes the economy is at “full employment” when the unemployment rate is 4.0%, at which point anybody who wants a job has one.   The labor market is still extremely tight.  To have any meaningful chance of raising the unemployment rate and thereby reducing wage pressures, the Fed needs to create some additional unemployed workers by inducing a mild recession.  A 6.0% funds rate and a +1.4% real funds rate by the middle of 2023 may be enough to make that happen.  Once that occurs wage pressures will diminish and the inflation rate will subside.

Consumer sentiment and spending.  Consumer sentiment has plunged since the beginning of the year as the fear of higher inflation and higher interest rates has spooked consumers.  Sentiment is on a par with where it was in the so-called “Great Recession” of 2008-09. 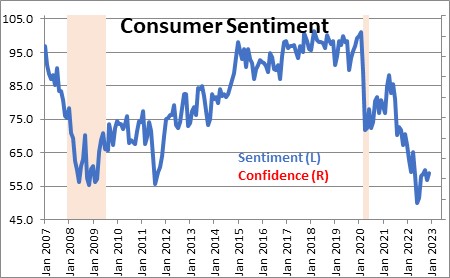 Second, it appears that a portion of the proceeds from the stimulus checks distributed in 2020 and 2021 were used to pay down debt.  The total monthly payments on a consumer’s rent or mortgage, auto loans, car loans, credit cards, and student loans as a percent of income is far lower now than it was prior to the 2008-09 recession. 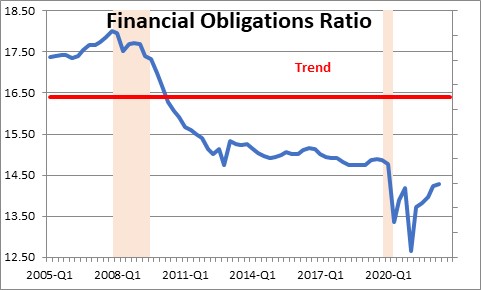 To maintain a moderate 2.0% pace of spending consumers have run up their credit card debt.  That is not sustainable over the long haul, but it is manageable for some time to come simply because consumers had so little debt earlier in the year.  Consumer spending will eventually slow, but it has not yet done so. 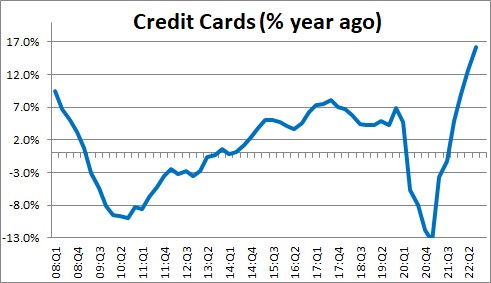 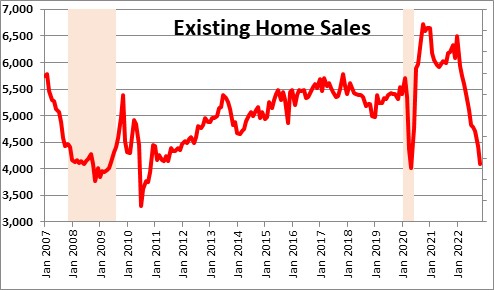 The catalyst for the drop in sales was a dramatic increase in mortgage rates which climbed from 3.0% at the end of last year to the 7.0% mark before recently retreating to 6.3%.   If the Fed raises the funds rate to 6.0% by midyear mortgage rates may once again climb to 7.0%, but a further increase of 0.7% in mortgage rates pales in comparison to the 3.3% increase in 2002. 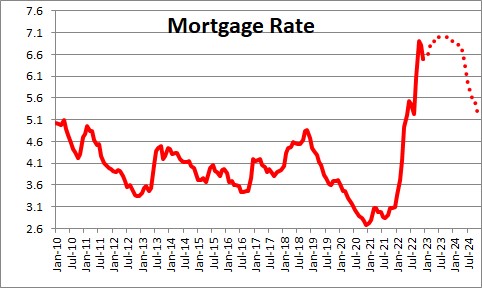 More important is the fact that home prices are beginning to fall quickly.  After consistently rising by 1.0-1.5% per month for two years, the rapid decline in sales is causing prices to fall by 0.5-1.0% per month and they should continue to decline steadily throughout 2023. 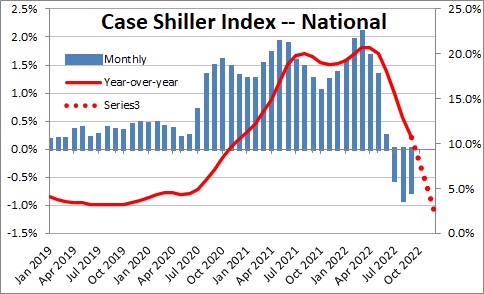 Combining a modest increase in mortgage rates with a sizable decline in home prices, housing affordability should climb in 2023. That will likely boost home sales slightly by the spring.  That is in sharp contrast to the 35% drop in sales in 2022.

GDP growth.  Pulling all of this together we look forward to 2.2% GDP growth rate in the fourth quarter of this year, followed by 1.0% growth in 2023 which is somewhat faster than the 0.5% pace envisioned by the Fed.  If the Fed boosts the funds rate to 6.0% by June and the real rate reaches +1.4%, that should be sufficient to produce a mild two-quarter recession in the first half of 2024, followed by a recovery in the second half of that year. 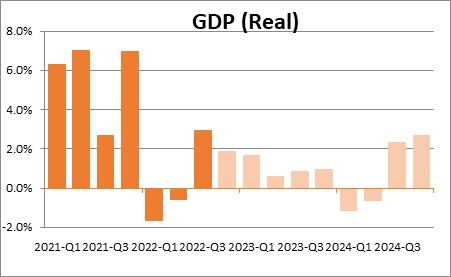 Inflation.  We anticipate a slow path back to the 2.0% inflation target for several reasons.   First, rents continue to climb.  In the past 12 months the shelter component of the CPI has risen 7.1%, and it is unlikely that it has reached its peak.  Given that this category represents one-third of the entire CPI index, it is difficult to imagine how inflation can quickly shrink when one-third of the entire index is rising at a 7.0% pace.  Because the rent component of the CPI lags the change in home prices by about a year, rents may not begin to decline until the fall of 2023. 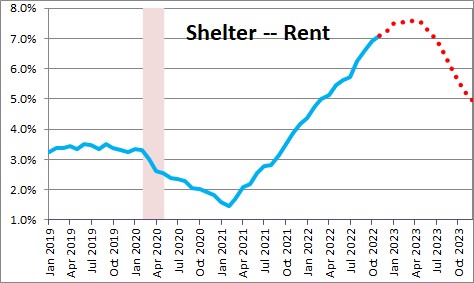 Second, the continuing tightness in the labor market is causing firms to bid up wages in an effort to steal workers from someone else.  As a result, average hourly earnings have risen 5.1% in the past year.  But because inflation has risen even faster, real wages have fallen by 2.7%.  Whenever real wages decline there is an incentive for individual workers and unions to seek even bigger wage gains.  The recently averted strike amongst rail workers was all about higher wages.  Airline pilots for United and American Airlines settled for roughly a 20% wage gain spread over two years.  Other unions will follow suit.  Given that wages represent about two-thirds of a firms total costs, higher wages is bound to translate into higher prices and faster inflation. 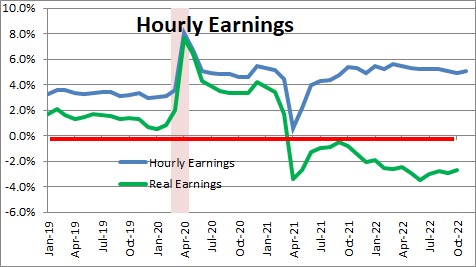 Third, gasoline and crude oil prices have fallen sharply since March when President Biden chose to tap the Strategic Petroleum Reserve for  1.0 million barrels of crude oil every day for six months.  But that drawdown is complete and 1.0 million barrels of oil per day are now off the market.  The reduced supply could be offset by faster production.  However, the EIA expects oil production to rise only slightly from 12.1 mbpd currently to 12.3 mbpd by the end of 2023.  The 0.2 mbpd increase in production will not come close to offsetting the 1.0 mbpd drop in supply.  That should translate into higher energy prices in 2023 which is in sharp contrast to the $35 drop in oil prices since March of this year. 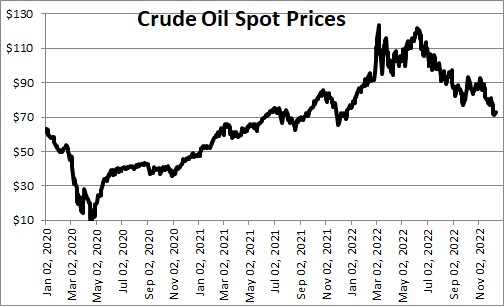 Given all of these factors we envision a slow drop in the core CPI inflation rate from 5.8% this year to  4.3% by the end of 2023.  Unfortunately, that is still double the Fed’s targeted rate of inflation of 2.0%.  With the inflation rate still that high, the Fed cannot back away from the additional rate hikes that are required to bring inflation back to target.

Given GDP growth of 3.2% in the third quarter and a likely 2.2% increase in the fourth quarter,  the economy still has considerable momentum.  For that reason we expect the Fed to raise the funds rate to 6.0% by mid-2023 which would finally produce a positive real funds rate of 1.4%.  That should be high enough to produce a mild recession in the first two quarters of 2024.  That, in turn, will cause a more rapid slowdown in inflation to 2.5% by the end of 2024.  As the economy slips into recession and inflation approaches its target, the Fed will allow the funds rate to decline quickly in the first few months of 2024.  By yearend the funds rate will have dropped to 2.5% which the Fed believes is a “neutral” funds rate.  And, after rising to a peak of 5.0% during the recession, the unemployment rate will decline to 4.3% by the end of 2024 which is close to the full employment threshold of 4.0%.  All of the distortions created by COVID — the initial shutdown, the dramatic amount of fiscal and monetary stimulus, and the resulting supply chain difficulties may finally wash through the system by the end of 2024.  Unfortunately, the end of 2024 is still two years down the road. It would be nice if the recession were to occur sooner because as long as the specter of inflation looms, it will be hard to generate robust GDP growth and equally difficult to reignite the stock market.

Happy holidays to all.