As 2011 comes to a close the economy appears to be emerging from the doldrums and is on track to significantly improve its performance in 2012.  Last year the economy got hammered early in the year by civil unrest in many North African countries which boosted gasoline prices and curtailed spending, and then by the tsunami in Japan which interrupted the supply chain.  These events reduced first half 2011 GDP growth to a snail’s pace.   But as the year progressed, consumer and business spending quickened and the notion of a double-dip was pushed into the background.  Barring any other political or natural disasters the economy seems likely to register GDP growth of about 3.0% in 2012.  That puts us squarely amongst a relatively small group of optimists.  Our view is predicated on what we believe are favorable developments for consumers, businesses, and housing which – combined – represent about 75% of our economy.  If the pace of economic activity accelerates to the extent we expect, the economy should finally begin to produce a respectable number of jobs each month, and the unemployment rate will begin a more noticeable downtrend.  Finally, the stock market will almost certainly continue to be buffeted by every tidbit of news about debt problems in Greece, Italy, and perhaps elsewhere in Europe.  While the U.S. economy is not immune to a European debt default, the fears of contagion similar to what happened following the collapse of Lehman Brothers in 2008 appear to be exaggerated because our banks and corporations currently have much stronger balance sheets than they did a few years ago.  If all of the above is reasonably accurate, we will be quite content by this time next year.  Specifically, we look for the following:

Consumer spending.  Most measures of confidence suggest that consumers remain nervous, but their spending has not wavered.  Consumer expenditures in the third quarter grew at an acceptable 2.5% pace, and fourth quarter growth seems equally rapid. 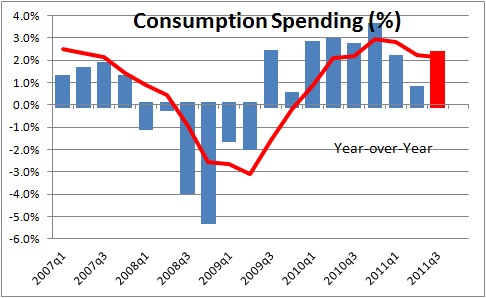 And why not?  At the beginning of the recession consumers were grossly overextended.  When the bottom fell out they got scared and paid down debt every single month for two years.  But in recent months consumers have once again begun to take on additional debt.  They would not be doing that unless they were comfortable with the amount of debt that they owe.  Think of it this way.  If someone took $100 from his or her paycheck each week for two years and used it to pay down debt, they would eventually become comfortable with the amount of debt they owe.  At that point they could then take the $100 and actually spend it.  That is exactly what is happening.  This behavioral shift should provide considerable support to the economy in 2012.  Remember, consumers are two-thirds of the GDP pie! 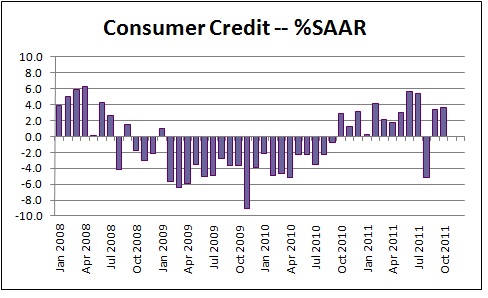 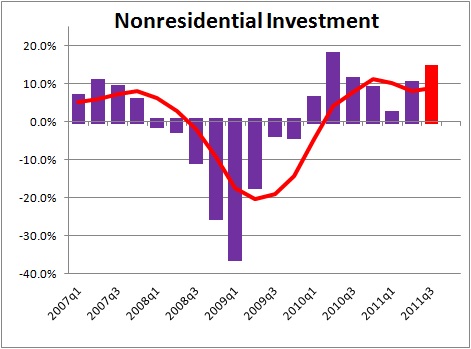 What are they spending their money on?  Technology.   Why?  Because money spent on technology boosts productivity which, in turn, enhances profitability.  So far that game plan has worked wonders.  Corporate profits today are at record high levels. 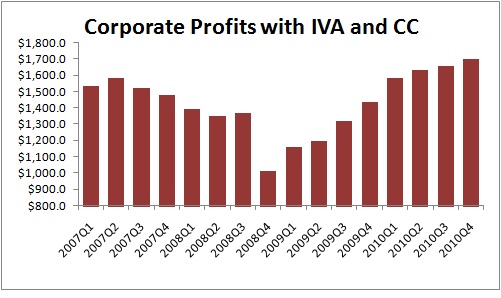 Many of those profits are still sitting around on corporate balance sheets in the form of cash – in checking accounts, Treasury bills, and CD’s.  Like profits, corporate cash holdings are also at a record high level.  What those instruments have in common is that they yield less than 1.0%.  But a CEO cannot keep a significant portion of the firm’s assets in cash for long.  Investors did not buy that company’s stock to be content with a 1.0% return.  They are looking for 8.0-10.0% or more.  As we go forward some of that cash will almost certainly be spent on basic research to develop a new product, on more technology, or even buying the competition – all of which will bolster GDP growth.

This positive view of corporate spending in 2012 is reinforced by a steady increase in the backlog of orders.  Each month our factories receive orders, manufacture something, and then ship those manufactured goods elsewhere.  If what is coming in the front door exceeds what is going out the back door, the backlog of orders continues to climb.  Indeed, it has been rising steadily for almost two years.  If that pile of orders keeps getting higher, how do firms respond?  They increase production – which is exactly what GDP is all about. 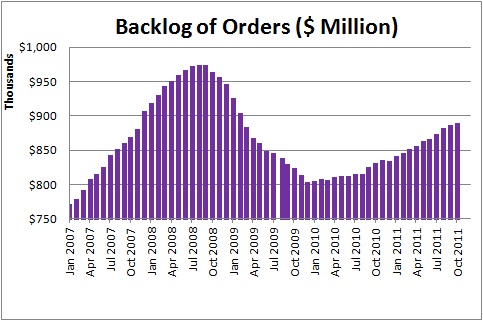 Some firms complain that they cannot get money from banks because lending standards are so tight.  While that used to be true, it is changing rapidly.  In the early part of 2011 bank lending to businesses began to turn upwards.  Such loans are currently expanding at a robust 8.7% pace which is accelerating with each passing month.  Another headwind bites the dust. 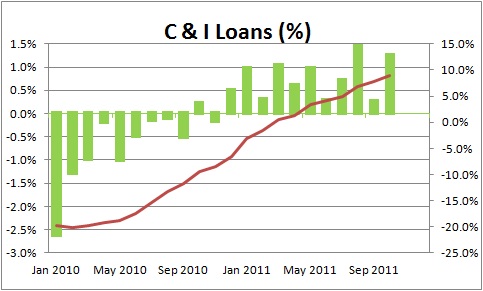 Housing.  For the economy to gather momentum during 2012 the housing sector must emerge from the doldrums.  We all know that home prices have fallen by about 30%, and more than two million construction jobs have been lost since its peak in 2006.  Typically in the early stages of a recovery the housing sector leads the way and construction employment rises rapidly.  This cycle has obviously been different.  But at some point the housing sector will turn, and that turning point is likely to occur in 2012. 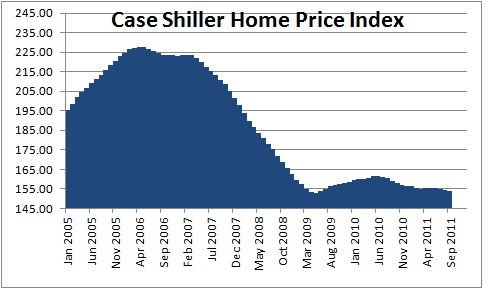 While the drop in home prices has been troublesome for the home owner, for a home buyer the drop in prices represents an opportunity.  Combining a 30% drop in home prices with a 4.0% mortgage rate, we find that housing is more affordable today than it has been in more than 40 years.  Thus, the fundamentals for housing going forward appear surprisingly strong.

One other thought to keep in mind is that the Census Bureau tells us that there are 1.3 million new households formed every year.   The home ownership rate in this country is 65%.  If two-thirds of those new households require housing, then builders need to be constructing about 900 thousand new homes each year.  Currently, they are building 400 thousand.  Once the rebound arrives, presumably by spring, the housing sector can easily double or triple from where it is today.  At that point construction employment can easily rise by 20 thousand per month — it is currently falling by about 10 thousand. 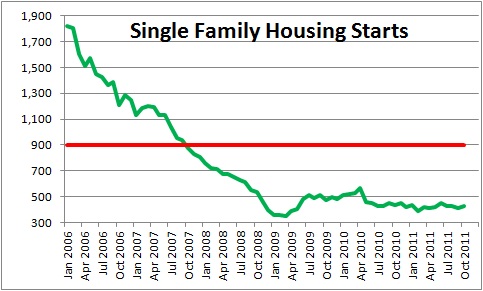 Employment.  The other piece of the equation for stronger growth in 2012 is jobs.  The November unemployment rate fell 0.4% to 8.6% which is a step in the right direction.  By the end of 2012 we anticipate a further drop to 7.6% which remains well above the full-employment threshold of 5.0% — the level at which (presumably) everyone who wants a job has one. Unfortunately, it is hard to imagine a set of circumstances under which the unemployment rate can return to that desired level sooner than mid-2015.  That trajectory is based on an assumption that monthly job gains climb to 210 thousand per month versus about 160 thousand currently.  While that is achievable, you have to remember that our forecast is more optimistic than that of many other economists.  If they are right it will take even longer. 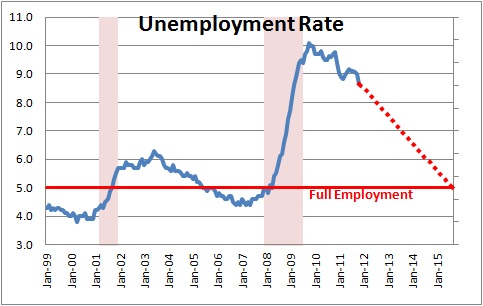 Why are we reasonably optimistic that jobs growth will accelerate?  Three reasons.  First, as noted above, if the housing sector responds to the favorable fundamentals, construction employment can easily add 20 thousand to the job gains each month versus the current decline of about 10 thousand.  That will boost the monthly reading by 30 thousand.

Second, state and local governments have shed nearly 700 thousand jobs since the demise of Lehman Brothers in September 2008.  Why?  Because as the economy collapsed, tax revenues plunged.   The only way states could produce a balanced budget – which most are required by law to do – was to sharply curtail expenses.  Thus, thousands of teachers, police, and firefighters lost their jobs.  But as the economy gathers momentum, tax revenues should rebound.  As a result, it will be easier for these government entities to produce a balanced budget without further job cuts.  Given that state and local government jobs are currently falling by 20 thousand each month, a return to no change would boost overall employment gains by an additional 20 thousand.

Finally, if construction and government hiring improves in response to faster GDP growth, the pace of job creation in other sectors of the economy should quicken as well.

Europe.  The market is buffeted almost daily by news about the debt problems in Greece, Italy, and elsewhere.  There are clearly long term problems that must be addressed as these countries attempt to stimulate growth and simultaneously lay the groundwork for spending cuts down the road to shrink their bloated budget deficits.   The biggest problem for 2012 would be if the European economy were to slip into recession.  However, the recently released forecast by the European Union calls for GDP growth of 0.5% next year with virtually no growth early in the year and a gradual pickup in the second half.  The IMF forecast is similar.  If, as we expect, GDP growth in the U.S. is surprisingly robust, then growth in Europe is likely to surprise on the upside as well.  Thus, the chance that any European country will default on its debt in 2012 is remote.

But it is important for us to remember that even in the event of a hiccup in Europe, the U.S. banking system and corporate America are well positioned to withstand a temporary setback.  One measure of the health of the banking system is the ratio of total assets to cash which is basically a leverage ratio.   If banks make loans and do not increase cash commensurately, this ratio climbs which means that the banking system is more highly leveraged and its appetite for risk has risen.  Over the past 35 years that ratio has averaged about 13.  In the mid-1990’s when times were good banks made a large number of loans, many of them mortgages.   By 2007 that ratio had climbed to 37.  Then the bottom fell out.  Many of those loans went sour, and banks had to scramble for cash to stay afloat.  As a result, this leverage ratio fell dramatically.  Today it stands at a near record low level of 7.5.  It is basically where it was in the mid-1970’s.  The point of all this is that the banking system today is well positioned to withstand any potential liquidity problem triggered by a default somewhere in Europe. 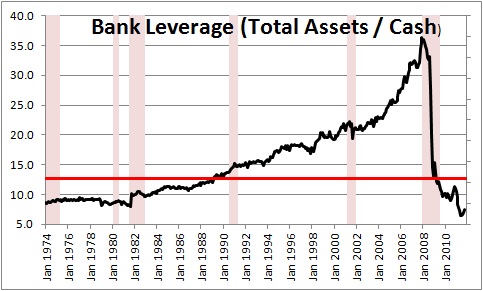 The same thing is true of corporations in the United States.  Corporate cash holdings are at a record high level.  While difficulties in Europe will clearly rattle the markets, the fears, in our opinion, are greatly exaggerated. 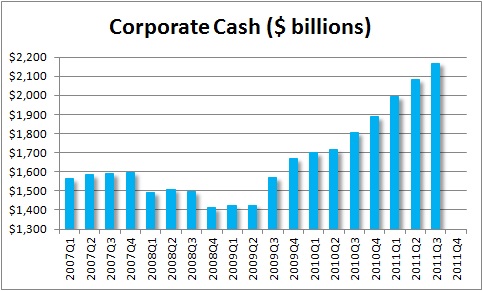 There is always the possibility that unanticipated events will change the outcome (much like what happened in 2011), but from where we sit the economy seems poised to finally shift into a higher gear during 2012 as the housing sector emerges from its slump, the economy begins to produce a significant number of new jobs, state and local governments stop laying off workers, and bankers begin to loosen up on their purse strings.  It’s about time.