The long-awaited slowdown in the pace of economic activity remains elusive.  Jobs are being created at a  robust pace.  Consumers are spending.  Businesses are investing.  The housing market has slowed but largely because of a lack of supply rather than a drop in demand.  It is hard to see any significant slowing in growth or the rate of inflation.  Economists are once again underestimating the strength and resilience of the U.S. economy. The reason for that appears to be that they focus on the increase in nominal rates and ignore what is happening to real rates.  As long as real interest rates remain negative, the economy will not slow by any appreciable amount and inflation will remain stubbornly high.

The Fed plans to raise the funds rate from 0% to what it believes is a neutral rate of 2.5% or so by the end of this year, and perhaps even move it slightly above that neutral level into restrictive mode in 2023.  That has clearly spooked stock investors and caused economists to ratchet downwards their growth expectations.  But the Fed told us what it planned to do in December of last year and the stock market has been sliding steadily ever since.  Wouldn’t it seem reasonable to see clear evidence of slower economic activity by now? 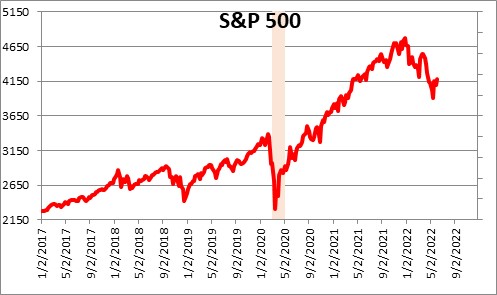 Most economists will point to the housing market as evidence that slower growth has arrived.  Existing home sales began their slide at the exact same time that the Fed began to sound tough and the stock market began its swoon.  Clearly, most economists conclude that the housing market is slowing down in response to the combo of sharp increases in home prices and rising mortgage rates.  It makes perfect sense.  Or does it?

If home sales were being hit by reduced demand, why is it that the average home sells in just 17 days which is the shortest length of time between listing and sale ever.  It seems to us that the demand for housing remains solid.  To be sure some potential buyers — of houses priced at or below $300,000 — have gotten squeezed out so demand has been reduced to some extent. 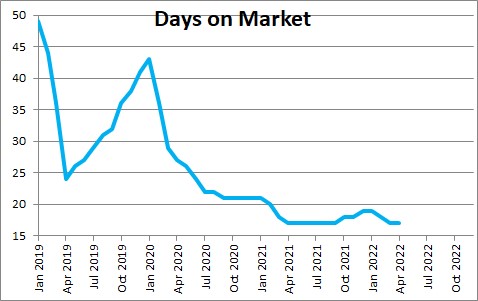 But the most important factor in our mind is that there is only a 2.2 month supply of homes available for sale.  Real estate agents would like to see about a 6.0 month supply.  There are simply not enough homes from which to choose  Some of the ones that are available will be too expensive, too small, in bad condition, or not close enough to a school.  It is difficult to find something that suits your needs.  Home sales would be far stronger than they are if there were more homes on the market.  So have home sales suffered because of reduced demand?  Or are there simply not enough homes on the market? We think it is largely the latter. 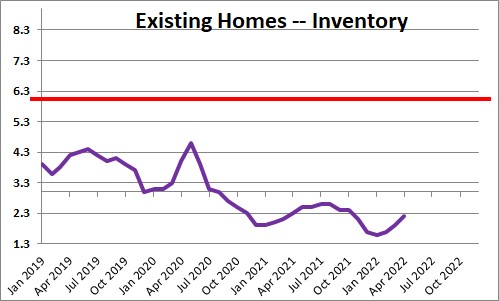 Apart from housing there is little evidence of the economy slowing down.  Retail sales through April have been rising rapidly in nominal terms and at a moderate rate after adjustment for inflation.  Consumers say they are worried about what is going to happen but, thus far, they have not changed their behavior.

Businesses continue to spend.  Nonresidential investment has been climbing at a 6.0% pace and that should continue.  With the labor market as tight as it is, firms are having a hard time finding enough bodies to hire.  And when they can find them they have to offer a much higher salary than they did a year ago.  When labor is in such short supply and so expensive, there is an incentive for firms to spend money on technology in an effort to increase output without significantly increasing headcount. For that reason investment spending seems unlikely to slow any time soon.

We currently expect second quarter GDP growth of 2.0%.  That may seem slow but with the economy at full employment then a 2.0% growth rate slightly exceeds the 1.8% speed limit.  Two percent growth is not slow.

Maybe the anticipated slowdown will begin in the summer.  We doubt it.  To us, there is a simpler explanation for why the economy has not downshifted.  Nominal rates may be rising rapidly, but real rates remain sharply negative.  If the funds rate at yearend is 2.5% and the CPI increases by the 6.4% the real funds rate at yearend will be -3.9%.  At the end of 2023 a 3.5% funds rate will be more than offset by a 4.4% increase inflation.  The real funds rate will be -0.9%.  Negative interest rate will neither slow the pace of economic activity nor bring down the rate of inflation.  For example, prior to the 2008-09 recession the real rate had to climb to the +3.0% mark before the economy finally rolled over.  In the late 1970’s when inflation was double-digit and well entrenched, the real rate had to climb to +8.0%.  Negative real rates will not do the trick. 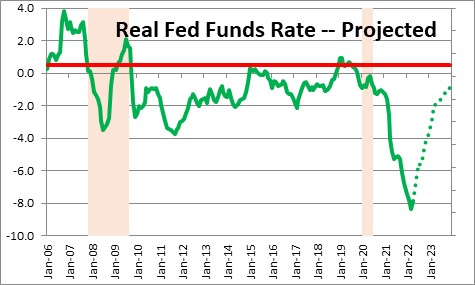 Economists in general and the Fed in particular do not seem to recognize that a “neutral” funds rate is not even close to 2.5%.  With inflation rising by 6.0% or so, a neutral funds rate today is likely to be about 6.0% — not 2.5%  Until they figure out that real rates are the driving factor for the economy they will constantly be surprised by how the economy seemingly shrugs off high rates.  And they will be frustrated when they discover that the inflation rate does not slow.  They make this mistake over and over again.