This Is Not the Time to be Negative

GDP fell 32.9% in the second quarter.  No great surprise.  Growth will rebound in the third quarter, but how big is big?  The early consensus appears to be for third quarter growth of 15%.  We are much more optimistic and anticipate a GDP jump of 32%.  At this stage of the game such a divergence of opinion is not too surprising because we have not yet seen any data for July, August, or September.  The estimates will converge as we progress throughout the quarter.  This week we will get the employment report for July as well as the purchasing managers’ index for that month.  Both pieces of information are important in figuring out exactly where the economy is currently.  We expect both reports to be upbeat.  Apart from the monthly data wiggles, we remain upbeat given the likelihood that a vaccine will be widely available by yearend or early next year, $2.5 trillion of fiscal stimulus is already in place with the likelihood of more to come, and we have a super-friendly Fed which has pledged 0% interest rates  until the inflation rate climbs well above its 2.0% target which should not happen for another couple of years.

The economy plunged into recession in March as policy makers brought the economy to its knees by effectively quarantining the entire country.  It became quickly apparent that second quarter GDP would fall by a record-breaking amount.  Meanwhile, 21 million Americans lost their jobs in a single month through no fault of their own.  We now know that GDP declined $2.8 trillion in the second quarter.  The hope was that $2.5 trillion of fiscal stimulus would put money back into consumer and business hands and allow the economy to quickly recover.  And it has.  The tax refund checks were received largely in April, but with the economy largely locked down, consumers had few places to spend it.  The savings rate soared to 33.5% in April versus its more normal level of about 6.0%.  But with consumers delaying payments on their mortgage or rent, as well as payments on their car loans and student loans, it became clear that the increased savings would soon be spent.  And that has been happening as the monthly increases in consumer spending combined with falling income (as transfer payments shrink to their earlier size), has caused the savings rate to drop to 19.0%.  But it is still at a hefty level of 19.0% which means that consumers continue to have the ability to spend at a vigorous pace for months to come.  That is what we are counting on in anticipating a third quarter GDP growth rate of 32.0% which roughly matches the magnitude of the 32.9% second quarter decline. 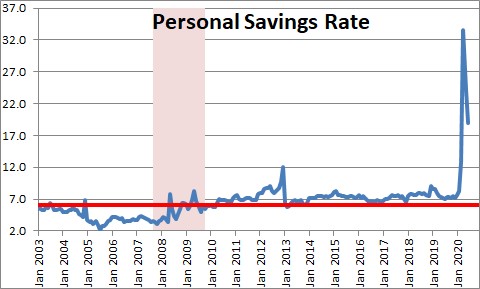 At some point, we will need steady jobs growth to boost consumer income.  It is growth in income that will produce a sustained economic recovery.  We believe that will happen by the fourth quarter, which is why we are looking for 7.0% GDP growth in that quarter and 5.5% next year.

That brings us to the employment report for July that will be available on Friday.  Between the time of the June employment survey and the comparable week in July, the number of people applying for unemployment benefits for the first time each week has declined as has the number of people receiving unemployment insurance benefits.  As a result, we expect payroll employment to increase by 4 million workers in July after having climbed by 4.8 million in June.  After having peaked at 14.7% in April, the unemployment rate declined to 13.3% in May, 11.1% in June, and should fall further to 9.4% in July.  The labor market continues to head in the right direction. 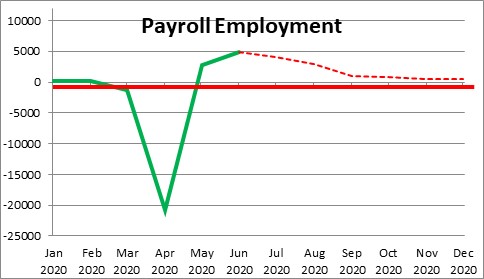 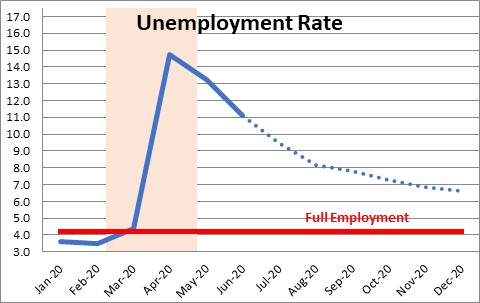 The other important indicator to be released this week will be the purchasing managers index for July.  Led by a record-breaking increase in both orders and production, the index surged in June from 43.1 to 52.6 which is the highest reading since April of last year.  We expect a further increase of 2.0 points in July to 54.6.  This should produce the third consecutive increase in industrial production.  Even the beleaguered manufacturing sector is mending more quickly than anticipated. 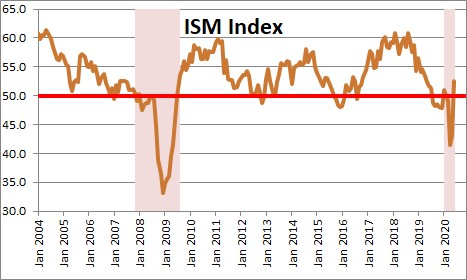 As we go forward, we expect payroll employment to continue to rise each month between now and yearend (although with progressively smaller gains each month), and the unemployment rate should decline to 6.6% by yearend.  That should generate sufficient income growth to keep the consumer spending freely for some time to come.

Meanwhile, it is likely that Congress will produce another stimulus bill of some sort (even though we think one is not required).  The buzz from the medical community continues to suggest that a vaccine of some sort should be available by the end of this year or early in 2021.  When that happens the stock market will soar, business and consumer confidence will surge, and the economy will get another jolt of upward momentum.  This is not the time to be negative.