Tone Down the Rhetoric!

We got the message.  The Fed has convinced us it is going to be tough on inflation.  But that tough talk has scared the pants off all of us.    Fed officials have suggested the funds rate is going to 2.5% by the end of this year, 3.5% by the end of 2023, and that it will do whatever is necessary to bring down the inflation rate. But despite the tough talk the funds rate today is 0.7%  The Fed is actually achieving its objective by the way it has chosen to characterize its intentions.  With the stock market having declined almost 20% and bond yields having climbed from 1.0% at the end of last year to 3.0%, perhaps it is time to change the tone.  It does not have to change the policy path it has outlined,  just change the way that it chooses to describe it.  It could highlight the fact that the CPI is showing some sign of having peaked.  It could note that growth in the money supply has slowed significantly in recent months.  It could suggest that its policy is working.  That would sound a lot more friendly and give market participants the chance to digest its new policy stance.  Oftentimes it is not what you say that is important, but how you say it.

But let’s go back to the beginning for a moment to highlight how we got into the current predicament.

The unprecedented GDP contraction in the first half of 2020 caused GDP to drop $2.2 trillion below where it would have been in the absence of the recession.  Thus, the recession was caused by the government’s response to COVID  —  the lockdown.  Businesses and consumers were not at fault.  Our leaders in Washington felt an obligation to make businesses and consumers whole again. 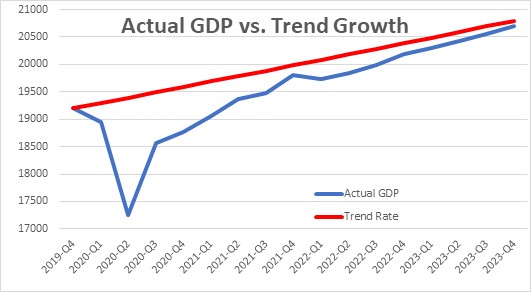 But the stimulus kept coming with two more rounds of checks mailed out in January and March 2021, and the Fed kept purchasing about $100 billion of securities every month.  These measures provided an additional $5.0 trillion of stimulus.

In total, the government and the Fed have provided $10.0 trillion of stimulus to counter a $2.2 trillion GDP shortfall.  That was gross overkill!  Now our policy makers have to deal with the fallout which is a soaring inflation rate.  So what to do? 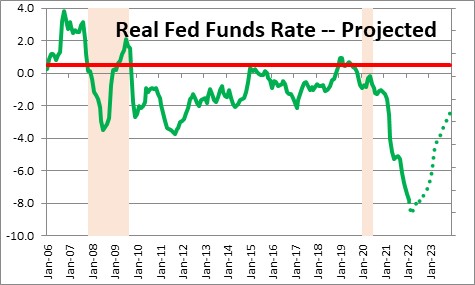 While the funds rate today is still only 0.7% the Fed’s “guidance” has led the markets to price in the funds rate levels described above.  It has fully convinced all of us that it is serious about combatting inflation.

But given the nearly 20% slide in the stock market and bond yields that have climbed from 1.0% to 3.0%, perhaps this would be a good time to tone down the rhetoric.  The Fed could suggest that while it remains committed to bringing down the inflation rate, it is seeing some signs that its policy is working and the  inflation rate may be starting to subside..  No change in policy – just a change in tone 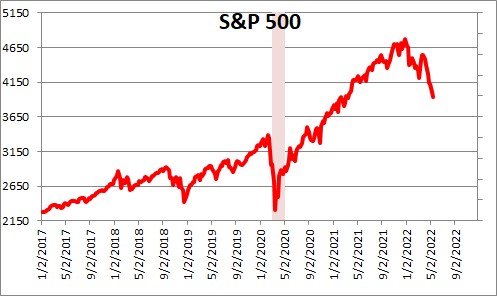 They Fed could point to the most recent CPI report which showed that the year-over-year increase slowed from 8.6% in March to 8.2%.  The core rate slowed from 6.4% to 6.1%.  Most economists believe that March will be the peak inflation rate for the cycle.  While the road to the 2.0% target is going to be lengthy, the Fed can forget that part for now and highlight the fact that its policy actions seem to be working.  Nothing has changed except the rhetoric. 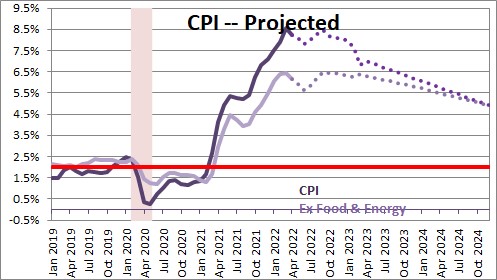 It could note money supply growth is slowing.  M-2 growth exploded during the 2020 recession.  Once it became apparent that the economy was recovering far more quickly and vigorously than anyone expected, the Fed should have begun to slow growth in the money supply.  It did not.  Instead, M-2 continued to grow at a double-digit pace.  But money growth slowed to a 5.0% pace in February and 3.3% in March.  While only two months, that is exactly what the Fed needs to do.  Powell and his colleagues should highlight that fact.  It would help to calm the markets and short-circuit the financial market tailspin. 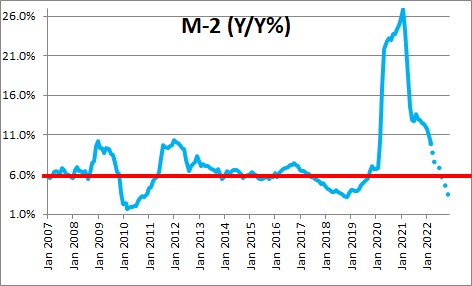 It is not so much what you say, but how  you say it. Do what you have to do, but tone down the rhetoric.