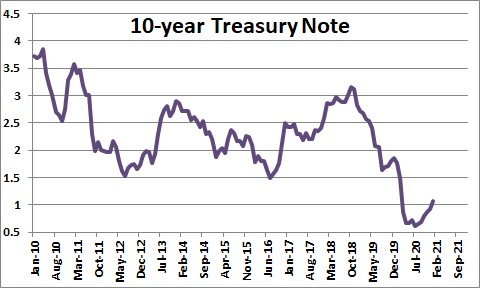 Once the recession began in December 2007 the Fed tried to stimulate the economy and ultimately pushed the funds rate almost to 0%.  It remained at that record low level until December 2015  With the funds rate at 0% and inflation persistently falling short of the Fed’s 2.0% target rate, the yield on the 10-year note fell gradually to 1.5%.

Right after the election in November 2016 the yield on the 10-year note  jumped quickly from 1.5% to 2.8% as market participants believed that President Trump’s proposed individual and corporate income tax cuts.  repatriation of corporate earnings currently locked overseas, and significant relief from the currently onerous regulatory burden, would boost GDP growth significantly, boost inflation, and push long-term interest rates higher.  Additional Fed tightening in late 2018  boosted the yield on the 10-year note to a high of 3.1% by October 2018..

By the middle of 2019 the pace of economic activity had moderated somewhat with growth slipping to about 2.0% and, at the same time,. the Fed began to grow increasingly bothered by the persistent shortfall in the inflation rate relative to the Fed’s 2.0% target.  This resulted in the Fed cutting rates three times in the second half of 2019 from 2.25% to 1.5%, and that caused the 10-year to slip from its earlier high of 3.1% to 1.8% by yearend.

Then, along came COVID and the government imposed a strict quarantine to, hopefully, slow the rate of spread of the virus.  The Fed cut rates quickly from 1.5% in February to 0% by mid-March as the U.S. economy entered the deepest recession in its history.  At the same time the Fed bought $3.0 trillion of U.S. Treasury and mortgage-backed securities.  This combination of events pushed the yield on the 10-year note from 1.8% at the end of 2019 to a record low level of 0.6%.

But the $6.0 trillion of stimulus in March and April of last year ($3.0 trillion from the government plus an additional $3.0 trillion from the Fed), combined with a further $900 billion fiscal stimulus package passed at the end of last year, and President Biden and the Democrats proposing yet an additional $1.9 trillion of fiscal stimulus within the next couple of months, has heightened fears that the government is over-doing it which will both boost growth and raise the inflation rate in the second half of this year.  As a result, the yield on the 10-year note has climbed from a record low level of 0.6% in the middle of last year to 1.1% currently.

However, the Fed has pledged to keep interest rates low until such time as the economy gets back to the full employment level and the inflation rate climbs above its 2.0% target for an extended period of time.  Those two conditions are unlikely to be met for at least another two years which should prevent the yield on the 10-year note from climbing dramatically.  For what it is worth we expect the yield on the 10-year to reach 1.4% by the end of 2021 and 1.9% by the end of 2022.