Inflation is an important ingredient in determining Fed policy.  The core personal consumption expenditures deflator on average climbed about 0.5% slower than the Fed’s 2.0% target for a decade.  It has recently accelerated and in the past twelve months has risen 3.6%.  The Fed is thrilled and concludes that it has at long last achieved its inflation goal.  It does not appear to be concerned about a further acceleration in prices.  In fact, the Fed believes that the recent quickening of inflation has been caused by temporary factors such as a rebound from a recession-reduced drop in prices for items such as airfares, hotel room rates, and restaurant prices, and supply shortages amongst things like motor vehicles and appliances which will eventually disappear.  It confidently expects the core PCE deflator to slow to 2.1% next year.  But we suggest that its measure of the housing component is seriously understated and it will rise more quickly than the Fed expects in the months ahead.  As a result, we expect the core CPI to rise 4.3% this year and 3.3% in 2022. 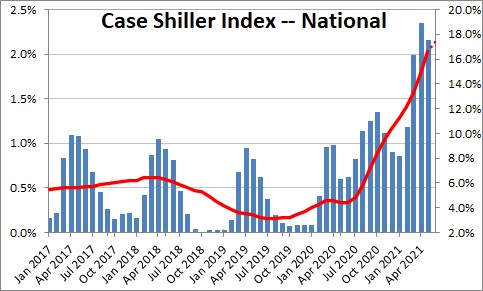 But yet the “shelter” component of the CPI has risen 2.8% in the past year.  How can this be? 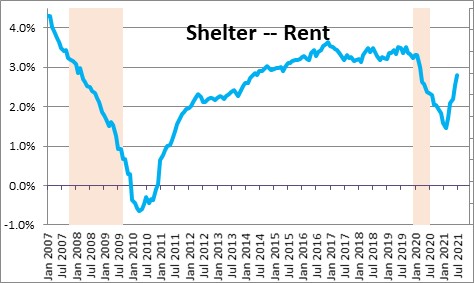 The shelter component of the CPI includes gardening, repairs, water and sewer services, and the cost of lodging away from home.  But the biggest component is what we pay for our primary residence.  Rent is a part of that.  But most Americans own their own home.  If you live in your own home your cost of shelter is what you give up by not renting it to somebody else.  The shelter component consists of actual rents as well as these pretend rents.  But there are problems in measuring each of these pieces.

For example, many renters have lived in the same house or apartment for a long time.  If they are good tenants the landlord may raise the rent only slightly from one year to the next.  But once the tenant moves out, the rent often jumps for the next tenant to get the rent back in line with other comparable units in the neighborhood.  Housing experts believe that the survey misses that huge adjustment between long-term tenants.

To measure what the BLS calls “owner equivalent rent” it asks, “If you were to rent your house, how much could it rent for?”  But homeowners are not well qualified to figure out how much rent they might get if they were to rent, so they guess. 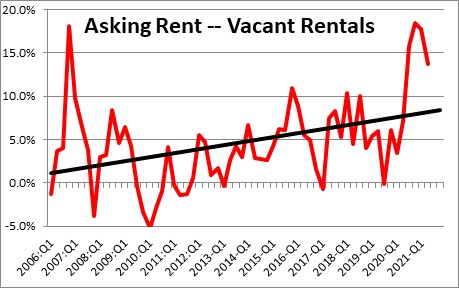 Given the huge difference between the Census Bureau’s 13.7% increase in rents versus the Bureau of Labor Statistics 2.8% increase in its “shelter” component, it is clear that the distortion can be substantial.

But, like it or not, the BLS will continue to use its “shelter” component in the calculation of the CPI.  It tends to be fairly stable from one year to the next and averages about 2.5% with little volatility.  However, towards the end of the housing boom in 2007 it jumped by 4.3%.  Our guess is that it will continue to climb from its current increase of 2.8% to 4.8% by the end of next year.  An additional 2.0% increase in the shelter component will boost the increase in both the core CPI and the core personal consumption expenditures deflator by 0.7% 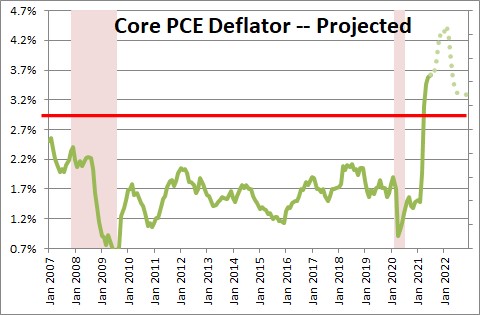 Some components of the various inflation measures do, in fact, represent temporary increases, but increases in the housing component going forward will be both substantial and prolonged.  The Fed’s expected 2.1% increase in the core PCE next year seems almost impossible to achieve.  We expect the core PCE deflator to increase 4.3% this year and 3.3% in 2022.  If inflation runs hotter than the Fed’s 2.0% target, consumers’ and investors’ expectations of future inflation will climb as well and boost long-term bond yields from 1.3% currently to 1.9% by the end of next year.