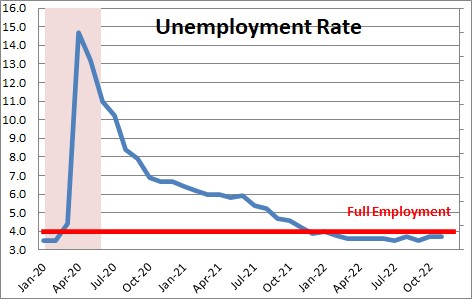 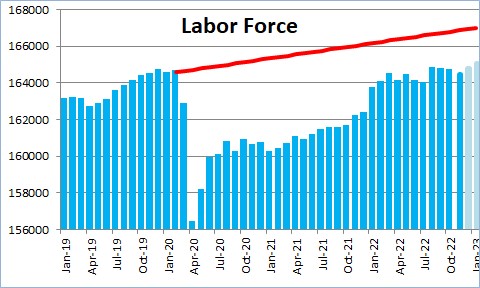 How come the two estimates of employment are different?  First, the two are figures are derived from separate data streams.  The payroll number is calculated from employment numbers reported by a large number of employers across all industries.  Employment for the unemployment rate calculation is derived from knocking on doors and asking people if they have a job.  It is known as the  household survey.  It tends to be more volatile than the payroll employment data.  One conceptual difference is that the household survey includes people who are self-employed which would not be captured in the establishment survey.  There is always monthly noise between the two series.  Over time the two surveys seem to show roughly comparable gains in employment.

In the wake of the Fed’s series of rate hikes the labor market is doing particularly well.  The Fed needs to see some weakness in the labor market to slow the rate of increase in wages, thus far one has to squint fairly hard  to find evidence of that slowdown.

With a continuation of steady job gains we expect the unemployment rate rise 0.1% at yearend to 3.8% and increase 0.3% to 4.1% by the end of 2023 as the Fed continues to raise rates..  The Fed considers full employment to be 4.0% which means that at that level everybody who wants a job has one.  Given that the current is still below the full employment threshold it implies there will be continuing upward pressure on wages as firms scramble and bid against each other to get the required number of workers.  As the Fed keeps tightening, we expect the economy to eventually enter a recession in the first half of 2024.  During the recession the unemployment rate is likely to climb to 5.0% which should result in reduced pressure on wages which should, in turn, significantly slow the rate of inflation. 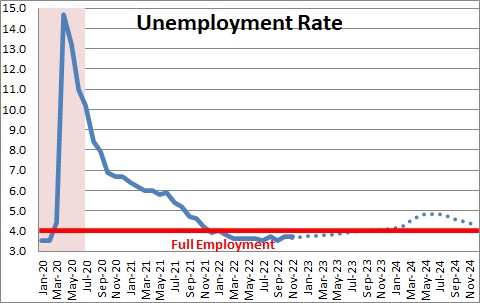 While the official rate is the most widely used, the reality is that the official rate can be misleading because it does not include “underemployed” workers which is true.  There are two types of “underemployed” workers.  First, there are people who have unsuccessfully sought employment for so long that they have given up looking for a job.  Second, are those workers  that currently have a part time position but indicate that they would like full time employment.  The total of these two types of underemployed workers are  “marginally attached” to the labor force.  The number of these workers has declined steadily since the recession ended in April of 2020 and is now roughly in line with where it was prior to the recession. 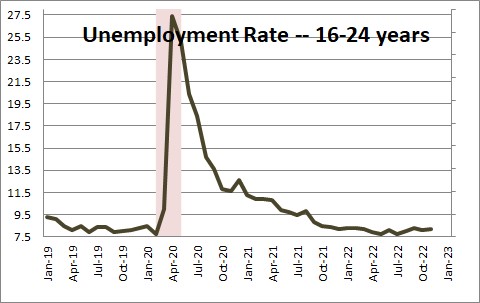 We should probably be focusing more on the broadest measure of unemployment because it includes all of these underemployed individuals.  The broad rate jumped by 14.1% in April 2020 from 8.7% to 22.8%, but then declined steadily.  It fell 0.1% in November to 6.7% after having risen 0.1% in October.   Full employment for this measure of unemployment is somewhere around the 8.0% mark. 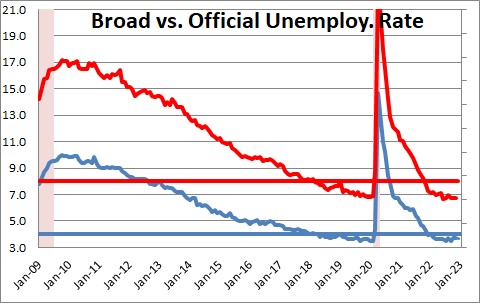