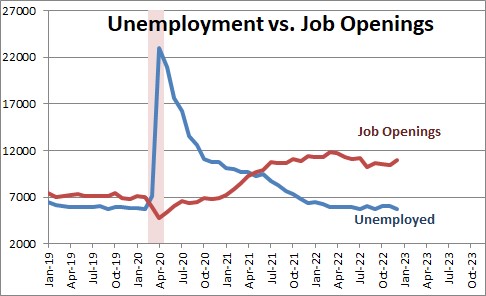 The  Labor Department reported that job openings jumped by 572 thousand in December to 11,012 thousand after having fallen 72 thousand i November and having declined 175 thousand in October.  With higher inflation triggering a series of Fed rate hikes the pace of economic activity has slowed somewhat but the job market has softened only slightly.

As shown in the chart below, there are currently more job openings than there are unemployed workers.  Specifically, there are 1.9 jobs available for every unemployed worker.  Prior to the recession this rate was steady at about  1.2.  Thus, the demand for labor still far exceeds the supply. 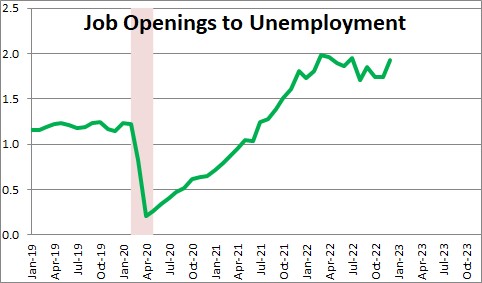 The Labor Department also provides information on hires each month.  Hires rose 131 thousand in December to 6,165 thousand after having fallen 77 thousand in November and having risen 15 thousand in October.  Hires have edged lower throughout 2022, but the operative word is “edged”.  Despite the prospect of slower growth ahead, the pace of hiring has not slowed much.. 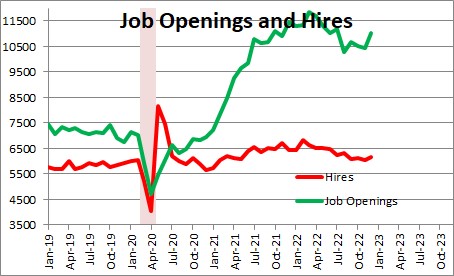 The rate of hiring rose 0.1 in December to fell 0.1 in December to 4.0.  The rate of job openings rose 0.3 to 6.7  Thus, job openings were 67.5% higher than hires which suggests that employment should continue to climb in the months ahead.  Prior to the recession job openings were  15% higher than hires which was a reflection of the very tight labor market that existed at that time.  Unemployed workers today do not seem to have the skills required by employers, have chosen to become gig workers and go into business for themselves, are afraid to work for fear of catching COVID and bringing it home to their families, are unable to find affordable day care, and/or are willing to live off generous government benefits for as long as they can.  Thus, job openings continue to outpace hiring. 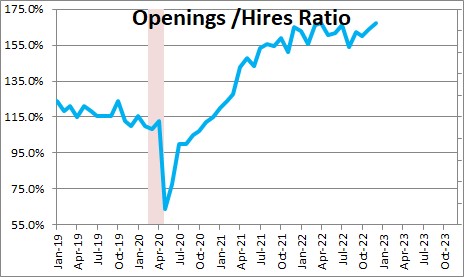 The quit rate was unchanged at 2.7.  It has gradually fallen in the past several months.  The willingness to quit one’s job has backtracked slightly in recent months as workers concern about a recession occurring in the not-too-far-distant future makes them slightly less willing to quit the the job that they have. 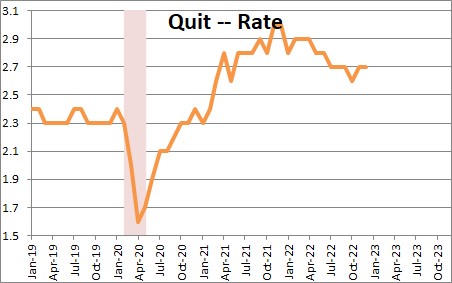