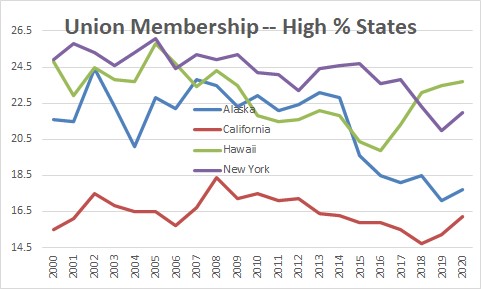 At the very top of the list is Hawaii where 23.7% of its workers belonged to unions.  Union membership in Hawaii is particularly strong among hospitality workers.  It was closely followed by New York with 22.0%.  The main story in N.Y. is the public sector where 71 percent of government workers belong to unions.,  Then comes Alaska at 17.7% where union membership is especially strong in infrastructure jobs like road building.   Next up is California at 16.2%.

At the opposite end of the spectrum the states with the lowest percentage of union members are South Carolina at 2.9% and North Carolina at 3.1%.  Then comes Georgia at 4.6% followed by Florida at 6.4%.  All four of these states are so-called right-to-work states where workers are not required to join unions.  There are currently 27 such states states in the country.  And all four of the lowest states are in the south.  Unions have never really been a thing in the South. Even in the ’60’s, the share of union workers in the South was one-half of what it was in the Northeast, Midwest, and West. This is partly cultural. People in the South have long been less supportive of unions than other parts of the country. 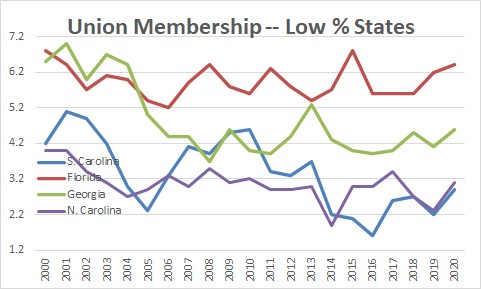 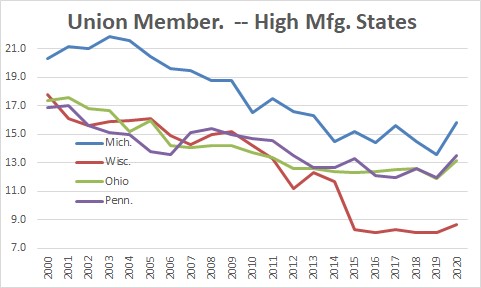 It is important to note the union membership rose in virtually every state in 2020.  But that is because the pandemic-triggered recession caused a big drop in largely non-union private sector jobs, while union member jobs in the public sector were hit far less hard.  Thus, the  recession caused the percentage of union jobs to increase in 2020, but the gain is almost certainly exaggerated.