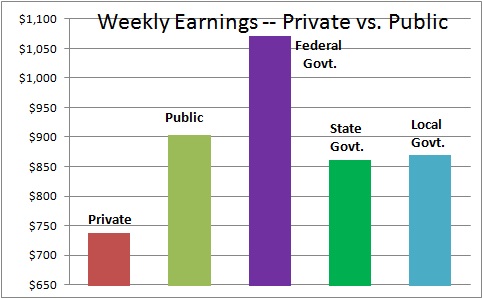 Weekly earnings for private sector employees in 2011 were $729 which is 23% below their public sector counterparts which came in at $895.

Federal government employees topped the list at $1,063 dollars per week which 46% higher than the comparable worker in the private sector.  State and local government workers came in at $852 and $861 dollars, respectively.

The superior earnings amongst public sector workers is largely accounted for by two factors – health care and pension benefits.  The typical government employee does not make any contribution whatsoever to his or her health care.  A recent Kaiser Foundation study found that the average family’s health care cost is $13,375.  If that burden were split equally between the worker and the government, public sector wages would decline by $130 a week if they had to pay for health care.  Then there is the pension plan.  Government workers can typically retire at 80% of their peak earnings – often at an early age.  A private sector employee can only dream of such a generous retirement package.  These generous benefits have been attained largely through union efforts.

But now those generous health care and pension benefits are under attack.  During the recession tax revenue plunged and state and local government entities faced difficult choices to balance their budgets.   Some laid off thousands of teachers, police, and firefighters.   Others asked workers to take time off without pay.  And still others decided to take on the unions and reduce employee benefits by forcing workers to contribute to their health care and retirement packages.  It is hard to do otherwise when the evidence shows such a wide discrepancy between public and private sector earnings.  Many taxpayers suffered layoffs or saw their wages cut and benefits reduced during the recession.  They expected their politicians to vigorously attack the generous health care and pension packages of government workers which remained untouched.