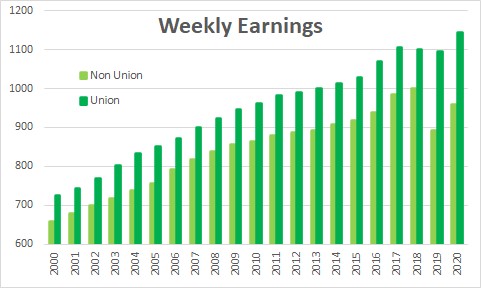 Unions have been extremely successful in attracting higher wages and benefits for their members when compared to comparable earnings for non-union workers.

In 2020 union members earned $1,144 per week which is 19% higher than the $958 earned by non-union members.   Given these high wages it is not surprising that companies continue to relocate to “right to work” states where union membership is not required.  Other companies will respond by moving operations offshore.  In some sense, the unions’ success is now leading to the steady contraction in membership.

That wage differential largely reflects gold-plated benefits packages  for both pensions and health care.  But someone pays for those higher labor costs.  In the case of governments the burden is born by the taxpayers.  When economic conditions are less than favorable and state and local governments are being forced to lay off workers to shrink bloated budget deficits, those governors and mayors have got to go after the unions and do what they can to trim those benefits and/or weaken union power.  They have had considerable success in recent years most notably in Wisconsin, Indiana, Michigan, West Virginia, and Kentucky.  With each successive victory other government officials work up the courage to take on the unions in their state or city.