At its June 18-19 meeting The Fed chose to leave the federal funds rate unchanged at 2.25-2.5%.  Its assessment of GDP growth for the next three years is essentially unchanged from what it was back in March.  However, the outlook for its preferred inflation measure, the personal consumption expenditures deflator excluding the volatile food and energy components, slipped to 1.8% this year from 2.0% three months ago.  The median forecast for the federal funds rate at yearend remained at 2.4%.  However, seven FOMC participants thought the rate might fall to 1.9% by yearend which means that group envisions two rate cuts in the second half of the year.  That is one of the widest divergences of opinion amongst Fed officials ever regarding the outlook for inflation just six months hence.  It also represents one of the biggest shifts in the anticipated outlook for the funds rate in a 3-month period of time.  Remember, back in March not a single Fed official envisioned lower rates by yearend and now seven of them are in that camp.

The outlook for economic growth is not the issue.  The Fed expects GDP growth this year of 2.1%, 2.0% next year, and 1.8% in 2021.  Those forecasts are virtually identical to what it reported back in March.  The Fed continues to believe that the economy’s potential growth rate is 1.9%.  Thus, all FOMC officials seem to concur that the economy will be steady for the foreseeable future.

What seems to be bothering them is the persistent shortfall in the inflation rate from its target.  For example, back in March the group thought that the core PCE would rise 2.0% this year.  By June that forecast was cut to 1.8%.  That is not a wide discrepancy, but the core PCE has generally been below the Fed’s 2.0% target rate for most of the past seven years.  In fairness, it climbed essentially to the 2.0% mark in May of last year and remained there through yearend, but it has slowed steadily in the first four months of this year and now stands at 1.6%. Our sense is that rising prices on goods imported from China will lift the yearend rate to 1.8%.  We do not know the logic behind the Fed’s forecast, but it ends up anticipating the same 1.8% increase in the core PCE for 2019 as a whole. 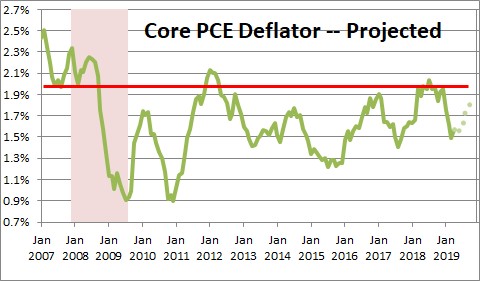 The Fed noted that market-based measures of inflation have declined.  One such measure would be the gap between the nominal yield on the 10-year note and the comparable rate on the inflation-adjusted 10 year.  The difference between the two represents the markets view of inflation for that period of time.  It has slipped to 1.77% which is the slowest anticipated inflation rate in two years. 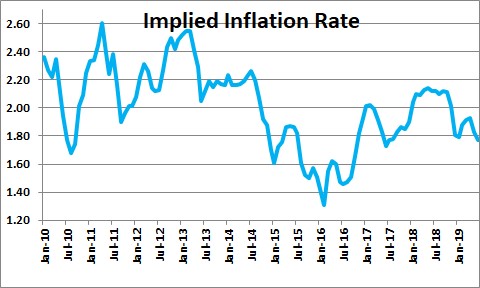 Survey-based estimates of inflation have also declined in the past six months or so.  The Philly Fed’s survey of professional forecasters now anticipates an inflation rate of 1.68%. 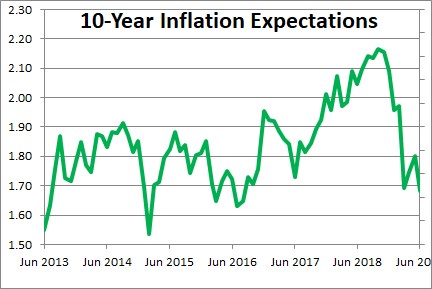 So the question is, how can the Fed get the inflation rate back to its desired path.  Will it get there on its own?  Or might it need help from the Fed in the form of lower rates to make that happen.  Apparently seven Fed officials are currently inclined to think the funds rate needs to be 0.5% lower by yearend to boost inflation back to the 2.0% target.  That would put the funds rate in a range from 1.75-2.0%.  Thus, about half of the FOMC thinks that rates should be steady between now and yearend, the other half looks for rates to be 0.5% lower.

Its press release on May 1 said, “The Committee will be patient as it determines what future adjustments to the target range for the federal funds rate may be appropriate.”

In June 19 that same sentence read, “The Committee will closely monitor the implications of incoming information for the economic outlook and will act as appropriate to sustain the expansion, with a strong labor market and inflation near its symmetric 2% objective.”

None of this should be construed as definitive that the Fed will cut rates between now and yearend.  Many members are leaning in that direction currently, but just as many are unconvinced that any rate change will be necessary.  Like the rest of us they are going to stand by and see what develops over the course of the next couple of months.

The fed funds futures market, however, is placing its own bets and seem to be more in line with the views of the more dovish Fed officials.  Market participants anticipate two rate cuts between now and yearend, and a third cut in the first half of next year.  That would put the funds rate at 1.5% a year from now.

We are not changing our view for 2.6% GDP growth this year, 1.8% core PCE inflation, and no change in the funds rate between now and yearend.  The difference between us and the market depends upon the behavior of GDP growth and inflation between now and December.  As always, we will see!