Will Inflation Ever Rise?

The Federal Reserve has two goals –full employment and a 2.0% inflation rate.  In the past those two goals were weighted equally.  But in September the Fed said that with so many people still unemployed, its focus will be on achieving full employment first, and then it will turn its attention to the inflation rate.  But the Fed has fallen short of its inflation target for years.  What exactly does it need to do to boost the inflation rate?  Could the Fed miss and inflation climb significantly above target?  When might we seriously begin to contemplate the first Fed tightening move?

Fed believes it will achieve full employment – which it defines as an unemployment rate of about 4.0% by the end of 2023.  However, the Fed has been far too pessimistic in recent months and has seriously underestimated both GDP growth and the speed with which the unemployment rate has fallen.   In contrast, we expect the economy to grow at about a 5.5% rate next year versus the Fed’s projected 4.0% pace.  If that is the case, the economy could achieve full employment by the end of 2021.  That is two years sooner than what the Fed currently expects.   If that forecast is correct, we may be turning our attention to the inflation rate far more quickly than anybody expects. 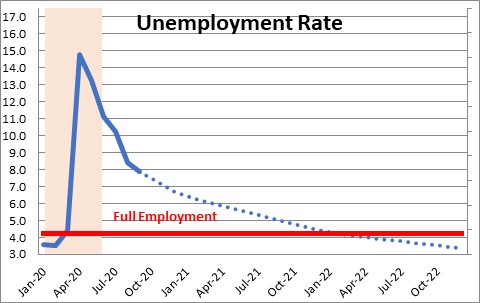 The Fed recognizes that it has seriously overestimated the inflation rate for years.  In fact, in the past five years the Fed’s preferred inflation gauge averaged 1.6% which is almost 0.5% below its 2.0% target.  Why has the inflation rate remained so stubbornly low? 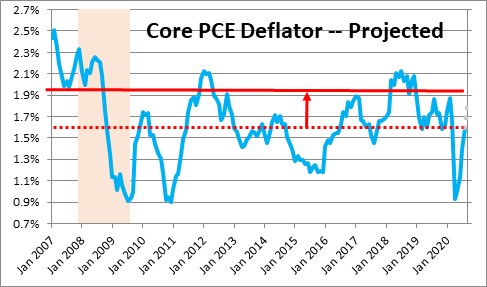 In the past five years the prices of goods and services have behaved very differently.  Service sector inflation has averaged about 2.5%, but goods prices have been essentially unchanged.  That is a very wide divergence which is largely attributable to changes in the way we shop. 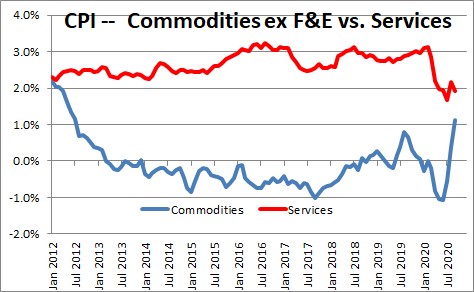 When we purchase anything today — from clothing to televisions to sporting goods or even a house — we scour the internet first.  We can find the lowest price not just locally but around the country, and we will probably buy it there.  If we buy it on Amazon, for example, we will not only get the lowest price, we will also get free shipping and next day delivery.  As a result, goods manufacturers have absolutely no pricing power.  If they raise prices, consumers are likely to take their business elsewhere.

Of all the things that we purchase roughly one-third are goods and two-thirds are services.  That means that there is a 0% inflation rate for one-third of all items in the CPI.  No wonder the inflation rate is so low!

If the Fed is serious about boosting the inflation rate to the 2.0% mark, how exactly will it accomplish that? 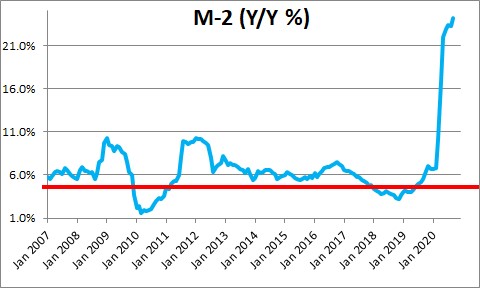 Back in the 1970’s money growth climbed to a double-digit pace and, as a result, inflation soared to 14%.  Clearly, 24% growth in the money supply is going to boost the inflation rate.  While we know it is coming, we cannot be certain when or by how much.

Could 24% growth in the money supply cause the inflation rate to rise far more rapidly than expected?  Perhaps, but remember that goods sector prices are being held in check by the internet and in recent years they have grown by about 0%.  It is hard to imagine runaway inflation when one-third of the economy has little, if any, inflation.

For what it is worth, we expect the Fed’s personal consumption expenditures deflator to rise 2.2% in 2021 and 2.5% in 2022.  That should not be troublesome to the Fed.  It wants the inflation rate to climb above its 2.0% target for a while to counter the long-period where it was so far below target.  Its 2.0% inflation target is an average for the business cycle as a whole. 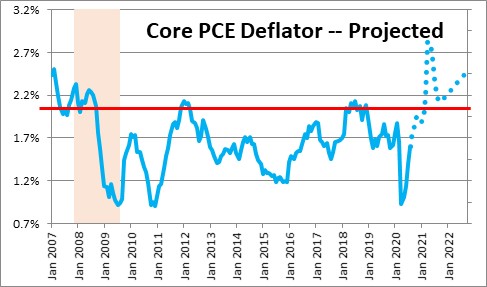 If the Fed achieves its full employment goal by the end of next year and the inflation rate is 2.2%, or even 2.5%, it is inconceivable that the Fed would choose to tighten.  The first Fed tightening move is so far into the future that it is off the radar screen.